Electrical Analog of a Chain of Springs

I'm trying to wrap my head around the Force $\rightarrow$ Voltage analogy between mechanical and electrical systems. I have a mechanical system where masses are connected by springs in series, and constant force is applied to the first mass in the chain. There is no damping anywhere in the system. I'm trying to construct a circuit that mirror the behavior of the chain of spring using capacitors for positions and inductors for masses.

Here are the two candidates I came up with: 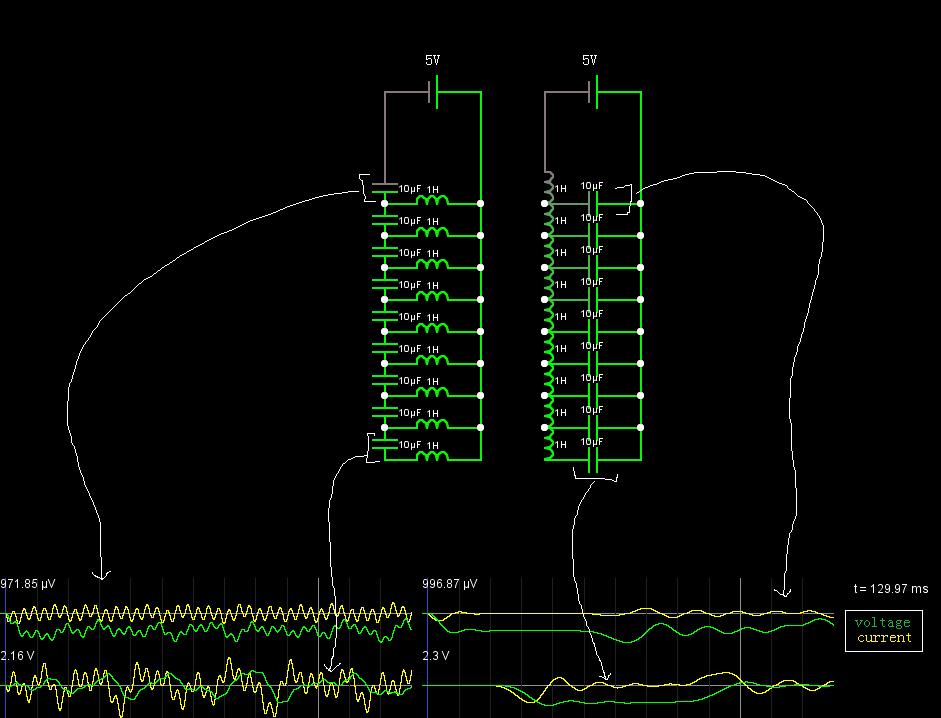 (I graphed the V and I for the capacitors in the four corners, starting from all charges being zero, since I can't set initial charges in the simulation)

I suspect the one on the right is correct but I'm still not sure. Do you know which one is the correct electrical analog of the chain of springs system I described earlier? If one or both of them are wrong, can you tell me what mechanical systems do they actually represent?

Yes, your circuit on the right models a chain of springs interspersed with masses.

Think about it. It should be obvious from frequency analysis alone that the left circuit can't be right. Springs with masses are going to low pass filter any force or motion input. The left circuit clearly high pass filters, not low pass.

Not the answer you're looking for? Browse other questions tagged newtonian-mechanics electric-circuits spring or ask your own question.

1
Would magnetic flux be necessary for analogous systems?
4
Imposing symmetries on asymmetrical dynamic systems
3
2D square lattice, nearest neighbor and next-nearest connected by springs
17
Why don't they use springs as an energy source for cell phones?
11
Understanding transverse oscillation in 1 mass, 2 spring systems
1
Resonant Frequency of 2 mass spring system
4
Energy stored in series springs vs energy stored in parallel springs
1
How do masses on a spring accelerate when the connection between them is cut?
1
How does splitting a spring result in a higher maximum velocity?