How many volcanic eruptions would be necessary per year to neutralize global warming?

Volcanic eruptions sometimes cool the earth. How many eruptions of what magnitude, locality and type would be required per year to neutralize Global Warming?

Volcanic eruptions release both stratospheric ash, which reduces insolation at the ground, and carbon dioxide, which has a long-term warming effect. The ash falls out of the atmosphere after a few years, but the extra carbon dioxide is brought from underground into the biological carbon cycle more or less in the same way as the carbon from fossil fuels. My understanding is that over geological timescales volcanic eruptions have a net warming effect. 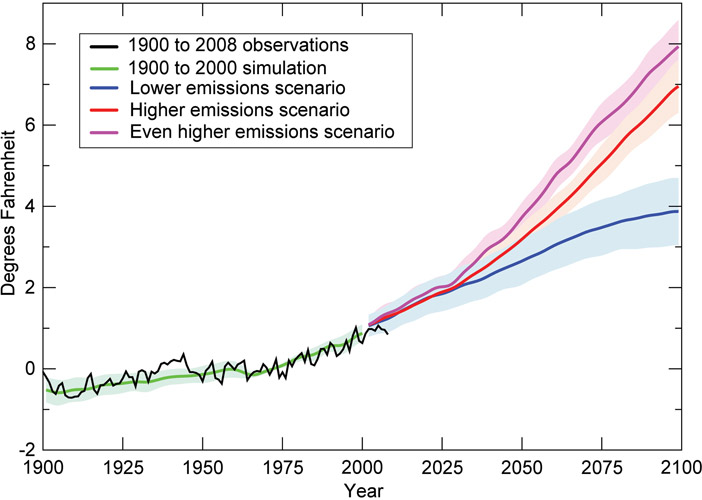 It's also important to keep in mind that the change in carbon dioxide content of the atmosphere over the past century matters as much for its effect on atmospheric and ocean chemistry as for its effect on temperature. Carbon dioxide has nearly doubled in the atmosphere, from a historical fraction of around 250 ppm to 400 ppm today. This change is being reflected in the carbon dioxide dissolved in the ocean as carbonic acid; there are predictions that the oceans may become too acidic to support corals in only a few decades.

It depends on the eruption, location, magnitude , timing etc. Have a look at the great Krakatoa eruption in 1883.

In the year following the eruption, average Northern Hemisphere summer temperatures fell by as much as 1.2 °C (2.2 °F).[9] Weather patterns continued to be chaotic for years, and temperatures did not return to normal until 1888.

Note, the famous climate models give order 1C changes in half a century or so, not in a year. These models are on a sliding scale, always fitting the previous and exploding in the future. This is from 2007 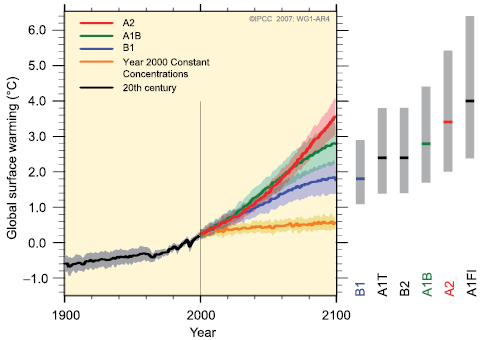 Figure SPM.5. Solid lines are multi-model global averages of surface warming (relative to 1980–1999) for the scenarios A2, A1B and B1, shown as continuations of the 20th century simulations. Shading denotes the ±1 standard deviation range of individual model annual averages. The orange line is for the experiment where concentrations were held constant at year 2000 values. The grey bars at right indicate the best estimate (solid line within each bar) and the likely range assessed for the six SRES marker scenarios. The assessment of the best estimate and likely ranges in the grey bars includes the AOGCMs in the left part of the figure, as well as results from a hierarchy of independent models and observational constraints.

I would not bet on the models being correct.

The eruption injected an unusually large amount of sulfur dioxide (SO2) gas high into the stratosphere, which was subsequently transported by high level winds all over the planet. This led to a global increase in sulfuric acid (H2SO4) concentration in high level cirrus clouds. The resulting increase in cloud reflectivity (or albedo) would reflect more incoming light from the sun than usual, and cool the entire planet until the suspended sulfur fell to the ground as acid precipitation.

So one such eruption in five years seems good enough to cool the climate drastically, whether heated by natural cycles or not.

Let us hope that it does not happen.

Search AGWunveiled to see volcanic events on graph with measured average global temperatures. Any effect is lost in random scatter except Tambora in 1815 (approximately 10X the next largest) which was followed by 'the year without a summer', 1816.

7
How much would Earth's orbit have to have decayed to explain Global Warming?
59
Why is it so inefficient to generate electricity by absorbing heat?
2
Will a warm object in a vacuum cool more quickly than a warm object surrounded by an atmosphere containing CO2?
0
How long will it take to cool the planet using a screen to block sunlight?