Explanation for this type of (magic-trick) suspension? [closed]

Well let's start off with that I'm not a physicist but I'd like some thoughts on something I came across in my hometown. 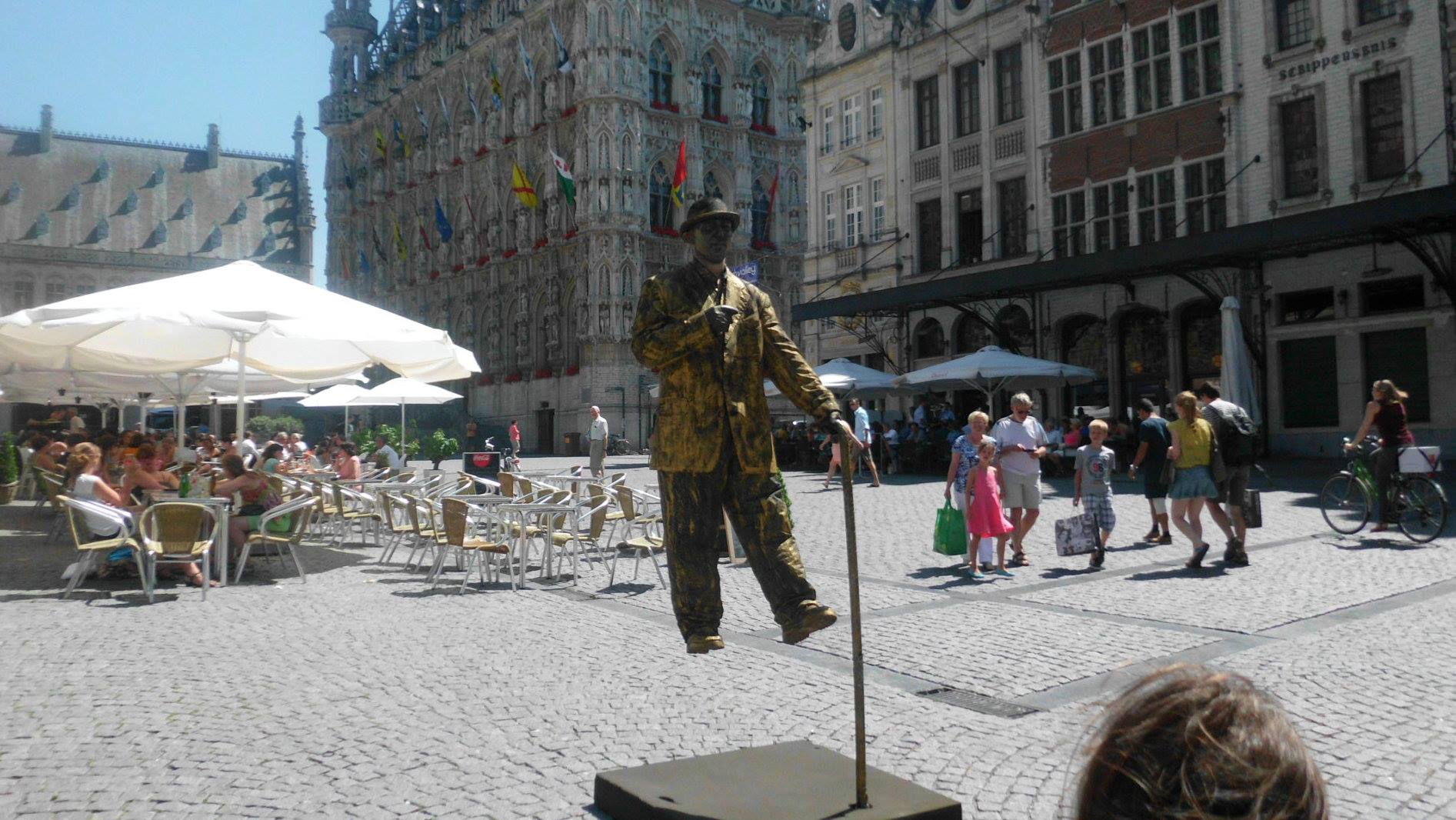 Is it possible that due to the electrical charge of magnets this guy can make the illusion that he can float ? Or is this probably a cheap trick that fools the eye ? I was standing there for quite some time watching the guy and he keep moving his feet. The resistance that he appeared to have was from a magnet force keeping him afloat. So after I passed this guy I did some physics searches on the web and the first thing that caught my eye was the electrical charge of magnets.

So the question is : Is this related to the electrical charge of a magnet or a cheap trick ?

The "trick" is that the cane he is apparently holding is actually firmly attached to the platform. A rigid piece goes up his sleave, then to a harness that holds his whole body up. For more about this type of magic trick device, google "broom suspension" or "aerial suspension harness".

No electric or magnetic fields were abused here. 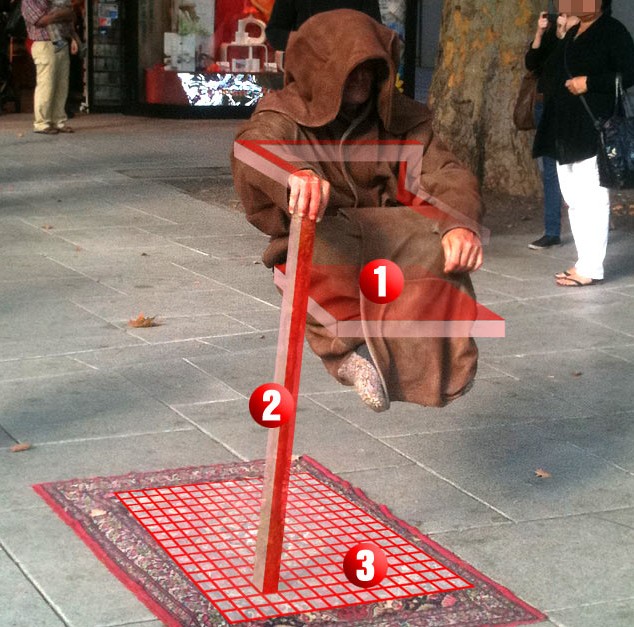 Olin Lanthrop clearly gave the most plausible explanation. But just for fun, let's just assume this was an electromagnetic trick. Would that be possible?

First - let's do this using electrical charge: how much charge would you need to allow levitation, and what would the potential have to be?

The force needed would be about 700N; solving

If I did not make a mistake, this makes the voltage on both the performer and the platform above which he is hovering about 3.5 MV. Note that this value is independent of the height he is hovering... just the force required. The breakdown voltage of atmospheric air depends on many factors - but you're not going to hold 3.5 MV on an irregularly shaped object without some serious corona discharge - the electrical breakdown strength of air is around $3.6\cdot10^6 V/m$, which will easily be exceeded in this configuration. I conclude it cannot be static electricity holding him up.

So, could it be magnetism?

With magnetic levitation, there are two problems: the strength of the magnet, and stability (two dipoles cannot provide a stable levitation platform). Let's tackle the stability by making the platform is a superconductor; then the "magnetic pressure" is

Because I don't want to do the integral, I am going to assume that the field is uniform over a diameter equal to the distance; then we can compute the force:

In principle it is possible to make permanent magnets that strong... but they would weigh quite a bit more than 70 kg (meaning you would have to update this calculation), and you wouldn't want to walk around with them on the market square of Leuven. Oh - and there's the minor problem of the cryogenics needed for your superconducting platform...

Spiders can fly by charging a piece of web and using the 120 V/m field to go up.

But i suspect that for a human-size weight, one would need too big of a charge to use electrostatic forces, and such would discharge through the air.

Not the answer you're looking for? Browse other questions tagged forces levitation or ask your own question.

-1
How the center of gravity works in the picture?

28
Is gecko-like friction Coulombic? What is the highest known Coulombic $\mu_s$ for any combination of surfaces?
1
A question from a Physics 2 exam: About electron cloud an a constant external field:
2
Is this Coriolis Force explanation simplified?
4
Practicality of a centrifugal space launch system
2
Lorentz force in superposition of two magnetic fields