Displacement of an object due to opposite and equal forces acting at different times?

This question is about mechanical waves in solids, the speed at which forces propagate through solids, and the displacement that might occur due to unequal starting times of equally sized forces.

There is a metal box which contains two signal paths: a short one and a long one. Forces that can be generated (for example by a hammer) can travel through these paths. See the initial state in the image. Left is the long signal path, and on the right there's the short signal path. The waves are travelling some distance marked by the dotted yellow and light green lines on the blue box's edges. 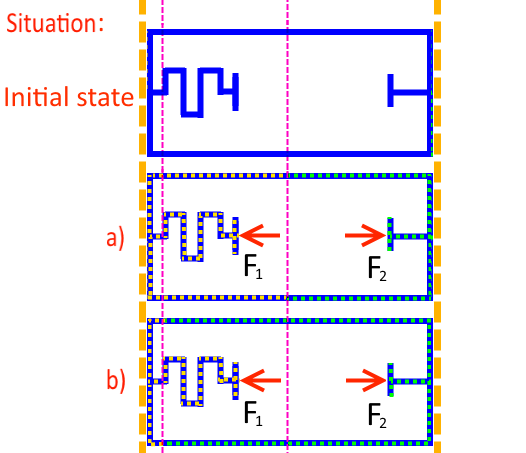 The red arrows represent forces. The plates next to it are the spots where the hammers hit.

In situation a), the forces are equal in size and opposite to each other. Force 1 starts earlier than force 2. A few milliseconds later, force 2 starts. It's just a short hammer blast on both sides, just a smash and release. The left side of the box is now being pulled to the left, and the right side is pulled to the right. After some time, the mechanical waves meet in the middle. The forces travel at a finite speed; the speed of sound in the material.

In situation b), the waves don't meet in the center but near the left edge. The times that the forces start are still unequal. Force 1 still starts before force 2, but now with even less time in between.

What happens when the waves (signals) meet? Do they annihilate and communicate to all particles that the velocity must become zero throughout the whole system?

Waves pass through each other and will here as well. I would expect the entire system to vibrate and "ring". Over time, the waves will dissipate as heat and the vibrations will be attenuated. If we think of the strikes as a particular impulse ($\Delta p$) and they are equal and opposite, then the total momentum of the box must remain zero and the box must end up stationary.

How can I visualize the movement of the particles of the box? For example in situation a), is the left side moving to the left, while the right side moves to the right and the center staying fixed? Is this like a stretching effect of the box?

Yes. Think of the components as stiff springs. They will vibrate, stretch, and compress in response to forces. All materials must do this.

Does the mass of the left side (longer signal path) affect the right side by pulling harder and thus creating a displacement to the left?

Pulling harder than what?

Not the answer you're looking for? Browse other questions tagged newtonian-mechanics waves time velocity displacement or ask your own question.