How can a laser pointer have range of several kilometers in atmosphere?

Laser pointers manufacturers claim that some pointers have range of several kilometers.

Okay, they use a powerful laser, but that powerful laser usually has power less than one watt. Okay, the laser beam is very focused.

But what about atmosphere particles like dust and vapor? Why don't these particles diffuse the beam and make it lose energy?

How does it happen that a less than one watt laser can have several kilometers range in atmosphere?

A laser pointer's energy and lights are concentrated in a very small light cone to reach a quite high intensity. So its labelled Wattage is much smaller than a usual bulb while its light is very strong at one point. And the labled power on laser pointers is the output power. The typical input power of a 50mW pointer is about 0.5 W. This make the difference looks bigger.

Actually common laser pointers used by teachers and lecturers are less than 5mW. The farthest distance to see their lights is about dozens of meters. But the laser pointers used by professional and amateur astronomers are much more powerful. You can see the light path caused by Tyndall effect directly as below image(source, though this impressive light path is not generated by a handheld pointer, the scence is similar.) 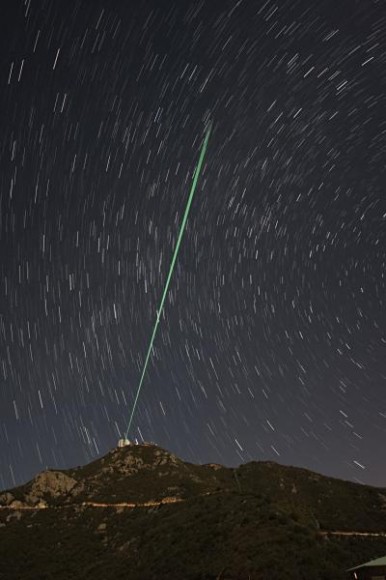 The energy reduction is mainly caused by Rayleigh scattering, which is relatively small compared with laser's intensity. So the beam can easily reach several miles away with the power higher than 50 mW.

Update: Georg insist the previous image can not be used to discribe laser pointers. So I add another real pointer picture here. But I have no feeling about distance with this one. 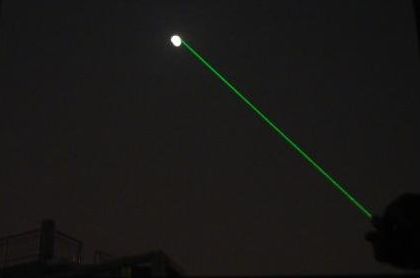 What about the elephant in the room, called coherence?

Laser light and ordinary light differ in the amount of coherence of the beam. Incoherent beams lose intensity as 1/r**2, where r is the distance from the source. Coherent beams in vacuum disperse slowly according to optical equations. In the atmosphere there will be absorption and scattering, as discussed in other answers.

Have a look at http://en.wikipedia.org/wiki/Lunar_Laser_Ranging_experiment to see laser light reflected from the moon, as far as distance travelled goes.

It is most likely the same reason as why the sky is blue. More specifically, Rayleigh scattering is proportional to the fourth inverse power of the wavelength, so if you choose the wavelength of the laser to be large (i.e. towards the red end of the visible spectrum), then you can suppress Rayleigh scattering significantly. In that case the range of the beam can be very large.

Upshot: the range of a laser is greater because the light is concentrated in a very narrow beam.

Without going into much detail of the power of the laser, I think the problem here has to do with the definition of 'intensity'. Wikipedia lists several different units for intensity, the one that most closely matches 'brightness' as perceived by the eye is probably radiance.

The units of radiance are

or watt per steradian per square metre, a 'steradian' being a two-dimensional angle on the sky.

Now given a fixed power for a certain light source, the difference between ordinary lighting and a laser are two-fold:

Both these factors mean that the radiance for the same power ($W$) a laser beam is at least 1000 times as 'bright' as a regular light source. Since the brightness is higher, the beam will be visible up to a longer distance.

It is important to note that this result is regardless of the absorbance or scattering that occurs, which in principle happens for both laser and non-laser beams.

Not the answer you're looking for? Browse other questions tagged electromagnetic-radiation laser or ask your own question.