I was studying for my exam and looking at the chapter which talks about Potential-energy graphs.

Let's take this as an example: 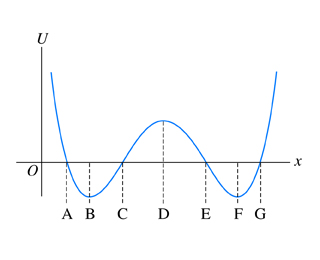 But having read about imaginary time and quantum tunneling (I don't really understand the concepts though.) I had the following thought: If $K<0$ that would mean that I have an imaginary value for my speed $v$ and since imaginary time exists that could mean $t$ has an imaginary component. It made sense in my head because I somewhat understand that quantum tunneling means a particle can get to certain positions which their initial position and energy wouldn't allow in classical mechanics.

Are the two at all related or is this too farfetched and totally unrelated?
I checked Wikipedia and didn't find much.

Yes, the two are intimately related. One way, as in QMechanic's answer, is via Wick rotations, but in general there is a lot more freedom once you allow integration contours to go over into the complex plane. In my area, strong field physics, the use of complex time to understand tunnelling problems is everyday bread and butter for many people, and it is the only way to use semiclassical models for tunnelling situations.

Tunnelling ionization is what happens when you hit an atom with a very strong laser field of very low frequency. The frequency $\omega$ of the field needs to be much smaller than the ionization potential $I_p=\tfrac12\kappa^2$ of the atom, which means that you need many photons to ionize it, but for such slowly-varying fields the physical picture is somewhat different. If the (so-called) Keldysh parameter $$ \gamma=\frac{\kappa \omega}{E_0} $$ (where $E_0$ is the peak electric field of the laser, and atomic units are assumed) is smaller than one, then it is more useful to think in terms of a quasistatic picture. That means that you consider the dipole potential of the laser, $V_L=-\mathbf E·\mathbf r$, as a fixed potential which is added to the atomic potential, and which varies slowly in time.

At the peak of the field, this added linear potential bends the total potential surface deep enough to make a barrier which atomic electrons (particularly, the ones on the highest occupied atomic orbital) can tunnel through. 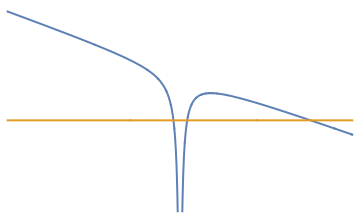 Tunnelling rates depend very sensitively on the height and width of the barrier, which essentially means that the field needs to be very strong (i.e. on the order of $0.01\:\text{a.u.} \approx 5\times 10^9 \text V/\text m$) for this to happen.

The first to realize this were Keldysh,

and the guys now known as PPT,

their work doesn't make for particularly easy reading, but it's fairly along the semiclassical WKB lines you point out in your question.

More recently, though, this understanding has crystallized as the picture known as the quantum orbit view of strong-field phenomena. A good review is

and I'll try and give a taster for what the overall feel of the field is.

Consider, then, an atom that's initially in its ground state $|g⟩$ with energy $E_g=-I_p=-\tfrac12\kappa^2$, which is subjected to an oscillating potential $V_L=-E_0z\cos(\omega t)$, which is slow (so $\hbar\omega\ll I_p$) and strong enough to be in the tunnelling regime (so $\gamma=\kappa\omega/E_0<1$). In this situation one can usually ignore multi-electron effects and work in the Single Active Electron approximation, at least as a first treatment.

The problem, then, is to solve the time-dependent Schrödinger equation $$ i\frac{\partial}{\partial t}|\psi(t)⟩=\left[\frac{\mathbf p^2}{2m}+V_a(\mathbf r) +V_L\right]|\psi(t)⟩ $$ under the initial condition that $|\psi⟩=|g⟩$ before the pulse starts. This is unfortunately impossible to do analytically in its full form, but one can separate the two pieces of the hamiltonian to get a pretty workable solution. This is known as the Strong Field Approximation, and it essentially means neglecting the effect of the ion's attraction once the electron has been ionized, and the influence of deeper orbitals is neglected. It means that you have two fairly good approximate solutions depending on whether your electron is still in the ground state, $$ |\psi(t)⟩=e^{-iE_g t}|g⟩,\quad\text{with}\quad i\frac{\partial}{\partial t}|\psi(t)⟩=\left[\frac{\mathbf p^2}{2m}+V_a(\mathbf r)\right]|\psi(t)⟩, $$ or has been ionized into a Volkov state, $$ |\psi(t)⟩=e^{\frac i2 \int_t^\infty (\mathbf p+\mathbf A(\tau))^2\text d\tau}|\mathbf p+\mathbf A(t)⟩,\quad\text{with}\quad i\frac{\partial}{\partial t}|\psi(t)⟩=\left[\frac{\mathbf p^2}{2m}+V_L\right]|\psi(t)⟩, $$ where $\mathbf A$ is the vector potential of the field and $|\mathbf p +\mathbf A(t)⟩$ is a plane wave with kinetic momentum $\mathbf k=\mathbf p+\mathbf A(t)$. I will calculate the ionization amplitude to an asymptotic drift momentum $\mathbf p$, so the quantity of interest is $⟨\mathbf p |\psi(\infty)⟩$. 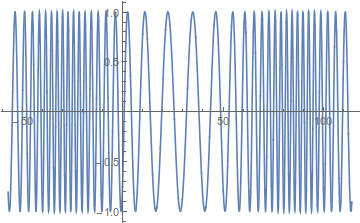 This is bad because you need very high accuracy on each of the positive and negative lobes of the integrand to get only mediocre accuracy on their difference, so even in this simplified version the problem is numerically tough. This oscillatory behaviour is driven by the fact that the $e^{iI_p t}$ term oscillates much faster than the laser-cycle timescales (~$2\pi/\omega$) at which the integration takes place.

The way to get out of this is to use the saddle point method, which is where complex times come in. The idea is to deform the integration contour into the complex plane to look for something which is numerically nicer, by turning the oscillating imaginary exponential into nice, decaying real exponentials. If this is done well enough, one can even skip the integration entirely, and just use the contributions from the top of the resulting gaussian-like bumps.

The upshot of all this is that the ionization amplitude can now be intuitively understood in a semiclassical picture:

Even better, once it's liberated the electron simply whisks away from the origin along the semiclassical trajectory $$ \mathbf r_\text{cl}(t)=\int_{t_s}^t (\mathbf p+\mathbf A(\tau))\,\text d\tau. $$

So everything is nice and shiny, and it works perfectly, except that... the barrier has mysteriously disappeared. Even though this is a tunnelling problem, the electron seems to simply skip past the region where the barrier should be.

The solution is exactly what you describe in the question: at the tunnelling time $t_s$, and for some time afterwards, the kinetic energy $\tfrac12(\mathbf p+\mathbf A(t))^2$ is negative (and equal to $-I_p$ at $t_s$ itself), which means that the velocity is imaginary, but the time is also imaginary and the two combine to make a (mostly) real displacement. Once the time gets down to the real axis, you are essentially out of the barrier.

One thing to notice is that when I say "phase" in the bullet points above I'm mostly lying through my teeth. Because the saddle-point time $t_s$ is complex, the 'phases' $e^{iI_p t_s}$ and $e^{-\frac i2 \int_{t_s}^\infty (\mathbf p+\mathbf A(\tau))^2\text d\tau}$ are not purely complex exponentials, so their exponents have sizable and negative real parts, which makes them very small in absolute value. This is where the unlikeliness of tunnelling is expressed in this formalism, and the main controlling factor on the ionization rate.

Now, as has been pointed out in the comments, this use of complex time can definitely be seen simply as a mathematical trick, without any physical significance. This is certainly the view of parts of the strong field community, and there is a healthy debate over the matter; at the least one can say that we don't really understand this as well as we'd like.

However, there is a certain niceness about it, and it does seem to sort-of fit. What does the complex time mean? If you split it into its real and imaginary parts as $t_s=t_0+i\tau_T$, then they each have a separate and distinct role. If you integrate from $t_s$ down to its real part $t_0$, it turns out that the semiclassical position $\mathbf r_\text{cl}(t_0)$ is largely real and it lies just outside of the tunnelling barrier, so that it can be seen as the time when it pops up into the continuum. (Indeed, one can make very successful classical models by simply taking this as the ionization time, disregarding the imaginary part of the semiclassical position, and propagating classically from there.)

The imaginary part $\tau_T$, on the other hand, directly appears in the ionization amplitudes, and it is well identified as the 'time spent under the barrier' if such a thing makes sense. For example, the transverse momentum distribution after ionization is of the form $e^{-\tfrac12\tau_T p_\perp^2}$, which ties in very well with the fact that borrowing an extra energy $\tfrac12p_\perp^2$ for a time $\tau_T $ will make the process less likely by the product of the two. The two legs of the integration contour, from $t_s$ to $t_0$ and from there through the real axis, have very intuitive interpretations as 'under the barrier' and 'outside of the barrier'

It's important to keep in mind, though, that once you go into the complex plane then time does become a much more complicated concept. The very same contour choice freedom that allows you to go for a complex saddle-point time also makes any contour between $t_s$ and the final detection time at $t=\infty$ valid. This holds essentially any time you go into complex times, and it does make quantum orbits a bit of a handful to grasp.

I'll stop here, but I hope this is enough to show that, putting aside the questions about its physical reality, complex time is indeed an important and useful tool for dealing with tunnelling problems.

Yes, quantum tunnelling in the double well potential can be solved in a Wick-rotated Euclidean formulation

see e.g. Ref 1. Here $t_E=it_M$ denotes Euclidean time. The Euclidean action is in turn interpreted as the usual kinetic minus potential term with a potential $-V$. Thus the double well turns into a double hill with no classically forbidden region in between! The non-trivial solutions are called instantons.

Another approach uses semi-classical WKB methods on the TISE. There is of course no imaginary time in the TISE, but there are imaginary wavenumbers in the classically forbidden region, cf. e.g. Refs. 2 and 3.

In quantum mechanics velocity is not an easy concept. Here particle motion is replaced by a wave. Momentum, is easier to define in quantum mechanics. A complex wave $\exp(ikx)$ describes a particle with momentum $p=\hbar k$ where $\hbar$ is Plancks constant divided with $2\pi$. It is fundamental in quantum mechanics that momentum cannot strictly be defined locally, that is at one point and its vicinity. However, it can give an approximate view of the physics to do so.

In the region C-E, close to C, the wave can typically be described by $f(x)\exp(-\kappa (x)x)$, where $f(x)$ is a slowly varying amplitude. Then, the exponential corresponds to putting $k = -i\kappa$ thus the approximate local momentum $p=\hbar k$ becomes imaginary. So your not to far from this description when you asserted that the velocity $v=p/m$ becomes imaginary.

Not the answer you're looking for? Browse other questions tagged quantum-mechanics time potential-energy complex-numbers quantum-tunneling or ask your own question.

291
What is Chirped Pulse Amplification, and why is it important enough to warrant a Nobel Prize?
17
How to understand "analytical continuation" in the context of instantons?
10
Statistical path integral normalization
2
Finding classical action in tunneling problem
2
What happens with a tunneling particle when its momentum is imaginary in QM?
1
Quantum tunneling versus over-the-barrier ionization
0
Value of complex angle in Snell's law
1
Why is an imaginary impedance compenent frequency dependent in a circuit?