Can you run away from your shadow?

Now this might be a silly question but it's actually bugging me, this one might be easier to understand if you have kids that watch (or used to watch) Peppa Pig. In one of the episodes, about shadows, the kids try to run away from their shadows, they try to move faster and faster and of course failing. Then comes in Mr Elephant saying something along the lines

It doesn't matter how fast you go, you can't run away from your shadow

At this point I would just like to say that I'm aware that this is a kids cartoon and all but in theory: is it possible?

For example if you would be traveling at a higher than speed of light (without anything in your pathway and with a constant source of light) would the position of the shadow be offset or moving away from ones current position? Or do elephants actually know a thing or two about physics?

Note: This is basically item 3 in jkel's answer.

If you move at an appreciable fraction of the speed of light, then your shadow can appear to be "trailing" you, although it will always be "attached" to your feet if you're on flat ground.

Suppose a person is moving in the direction shown below and that there are plane waves coming in from an angle.

Now think about the light rays that hit the person's head, body, and feet all at the same time, as shown in the diagram below.

The dashed lines show the path light would travel if the person weren't there. But the light does get blocked. Since light has a finite speed, it will take a longer amount of time for the shadow of the person's head to appear on the ground compared to the shadow from the person's feet.

Now all of this is for light that strikes the person at the same time. So far, so good.

If you put it all together, you get something like this at any instant in time:

The shadow will come out from the feet, but the head will be "behind" where you might expect it to be if the person was stationary.

Here is how you can "run faster than" (or at least, get away from) your shadow: you jump at sunset (I just realized 15 minutes after posting that this is the point that @jkej's answer made as possibility #2)

Your shadow will detach from your feet, and it will "run away" from you. In the frame of reference of the shadow, you are running away from it.

Unfortunately, it won't last... the elephant, in the end, is still right. Unless, of course, you jump just as the sun sets: your shadow would disappear before you land again. Timing may be tricky, but with a good pogo stick you might just do it. 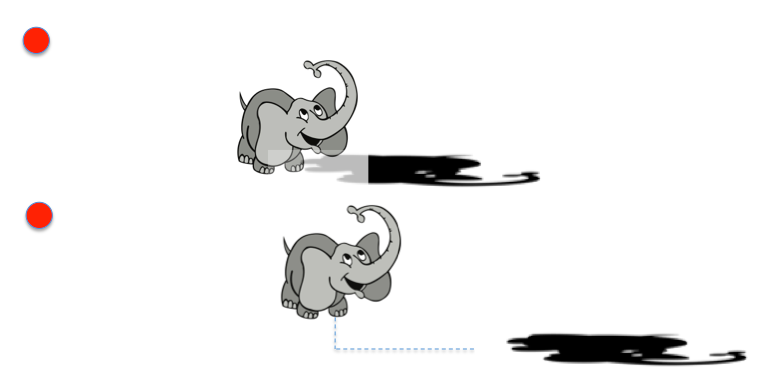 Depending on exactly what you mean by away from your shadow, I can think of a number of methods:

Your shadow, surely, is not just the apparent darkening of a 2D region of a diffuse surface you happen to be standing in front of; it is the entire volume of space that your presence is preventing light from reaching, the extrusion of your silhouette from the light source out to infinity (for a point light source, or possibly to a point a finite distance away in the case of an area light source larger than you and sufficiently close).

Moving sufficiently fast with respect to the light source will cause this volume to deform in all kinds of peculiar ways, but can never detach it from you.

This is borderline philosophical stuff, but...

If you have a jetpack, or if you are in an ultralight/paraglider/etc., and the only light source is the sun, then the higher you go, the farther you will be from your shadow. You don't need to be particularly fast this way - even if you are close to stalling, you will still be able to distance yourself from your shadow.

You could also hide behind an opaque object so that you get no direct light from the light source. That way you won't have a shadow of your own.

Alternatively you could just become transparent, but that may not be very healthy.

There is a philosophical question of what happens to your shadow, after it would travel faster than the speed of light. This is easily realized with the thought experiment of an object is moving around a point source of light.

Given that the radial velocity of a rotating body is $\omega = vr$, then the shadow projected at a distance $r$ can then be rotating/traveling faster than the speed of light. This is the extrapolation of the equation: assume the body at $1m$ is traveling at a tangential velocity of $v=.5c$, then assume there is a second concentric circle where the shadow is being projected at $r=2m$. The projected shadow along the second orbit is moving at $v=c$. Moving the second concentric circle where the shadow is projected any further out would mean that it would be traveling faster than $c$.

So, assume that in the above experiment, where the projected shadow is moving faster than $c$, there would be an event horizon between you and your projected shadow, meaning you could not observe it and therefore you would have perceived to outrun it.

Not the answer you're looking for? Browse other questions tagged special-relativity visible-light speed-of-light shadow or ask your own question.

0
Could the shadow move with faster-than-light speed?
0
Am I faster than my shadow?

3
Is there a stationary frame of reference?
31
Can the sun cast a shadow?
1
Can an object spinning near the speed of light be accelerated significantly in any direction?
1
Can a bucky ball cast a shadow?