Are there two theories that are mathematically identical but ontologically different?

I have no background in physics but there is a question that has been bothering me, so I'm asking you.

Are there at least 2 physical theories that are :

When I say "mathematically identical", I am not speaking of theories that can not be experimented on, due to technological constraints (like atomism at the time when this was still debated) but really of theories that can theoretically not be compared, even by a Laplace demon.

Do you agree with my assumptions? If so is there such theories and/or a demonstration that they can not exist?

update The reason they are equivalent is because they reach the same central equation (Schrödinger equation) but from different paths. So the rest computations and experimental results can be calculated the same and so on.

Because the same mathematical formalism occurs in both, it is not possible to distinguish between LET and SR by experiment. However, in LET the existence of an undetectable aether is assumed and the validity of the relativity principle seems to be only coincidental, which is one reason why SR is commonly preferred over LET.

The other answers bring up some nice examples of theories in physics that are equivalent in prediction but different in interpretation. I just want to bring up a trivialized example to illustrate the flaw in the reasoning in the question.

Suppose I have two theories which each predict the same quantity, say the maximum temperature at a given location on Earth on a given day. To make this concrete, suppose the first uses sophisticated modelling of the atmosphere, weather processes, etc. Suppose the second one is a sophisticated statistical algorithm which makes its prediction based on a large sample of historical data, comparing temperature trends across decades and a wealth of other data.

How can you tell which theory is "correct" (probably more fair to ask which theory is "more correct than the other")? You could try to extend both theories to be more general and predict more quantities, and see which one starts to break down (or more likely, both break).

I think the more interesting underlying question is "Is there a unique theory that accurately predicts all physical processes?". First, though, one needs to settle the question of "Can a theory of everything exist?", see Gödel's incompleteness theorems (and also this) for some information on that topic.

The two theories have different metaphysical implications, standard model + effective quantized gravity aim to completely describe reality as we know it,no metaphysics, but string theory adds another six dimensions at least which could easily accommodate metaphysics in those dimensions.

But of course you can easily modify classical electrodynamics by just declaring those potentials as physical/ontological fields. Then the gauge freedom would mean that we cannot determine the actual values by observation, because as physical fields they would, of course, have to have unique, well defined values everywhere.

Now quantum mechanics gives this an interesting twist, through the Aharonov-Bohm effect: In this effect, a confined magnetic field affects the quantum phase of electrons where there's no electric or magnetic field, in a way visible through interference. Now if you assume that the potentials are actually physical fields, then the Aharonov-Bohm effect is completely local: You just integrate the vector potential along the way of the electron. However if you don't consider the potentials to be physical fields, then you'll find that Aharonov-Bohm is a non-local effect: The interference pattern of the electrons depends on the magnetic field in a region which the electrons never enter, not even in a quantum sense.

Also note that this "Aharonov-Bohm nonlocality" is independent from the nonlocality associated to Bell's inequality.

Those worlds are very different. You'd think one or the other would have to be "true", but they're completely equivalent. If you think you live in one, the other is just a mathematical trick. But who's to say the other viewpoint isn't right and your perceptions are just being tricked?

They are mathematicaly equivalent since in classical mechanics all measurable quantities are relative and/or differences between other quantities. Metaphysicaly or epistemologicaly they are quite different as the referenced link may convince you (check for example the PDF linked and consider the famous bucket thought experiment and the absolute-relational debate about space-time). 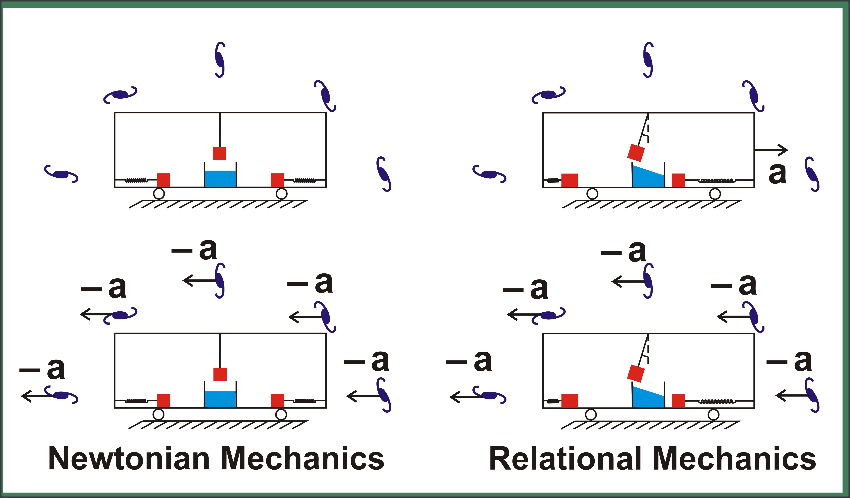 Not the answer you're looking for? Browse other questions tagged mathematical-physics soft-question or ask your own question.

13
If a theory of everything exists, is it necessarily unique?
8
Why does math work for describing and solving physics problems?
7
Are Lorentz aether theory and special relativity fully equivalent?