B)Find the smallest coefficient of friction such that the wedge will remain at rest.

No specification on whether or not any of the masses $m_i$ are bigger than the others, so let us assume that $m_1$ goes down and $m_2$ goes up the slope. Then A) is fine. (a minus error in the final answer for A) is introduced if I assume the other orientation)

As for B) if we consider the wedge+masses as a system, then to conserve linear momentum if the masses move as above, then the wedge must move rightwards. So the frictional force acts leftwards until the wedge slips. The only other force acting on the wedge is via the normal contact force from $m_2$. A component of this force acts to accelerate the wedge horizontally. Let's write this relative to some fixed inertial frame of reference with $x$ rightwards. Then the above recast into symbols gives $$-\mu (M+m_1+m_2)g - m_2 g \cos \alpha \sin \alpha = 0 $$ at the point of slip of the wedge. However, solving this for $\mu$ gives a negative result. Where did I go wrong? 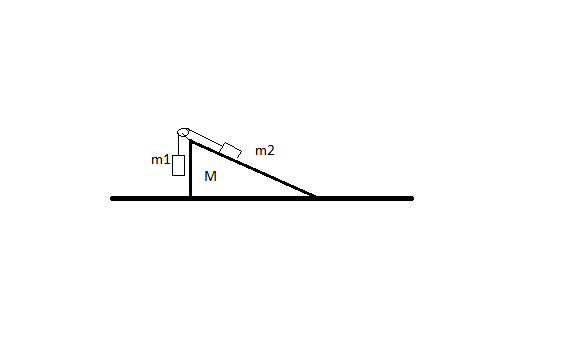 You should not be able to introduce a minus error just by choosing a convention. I assume that you just did not flip all the minus signs.

The wedge has to be at rest, so the force of friction has to compensate the tangential forces exactly. This means $$ \mu F_\text{down} \overset != F_\text{tangential}. $$

I now construct the forces that act on the masses: 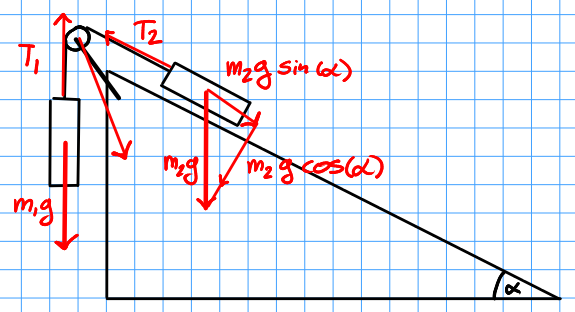 In the static case $a = 0$, those two forces are equal and do not make the wedge move. In the dynamic case, they try to move the wedge. This is what you meant by conservation of linear momentum, just written down with the forces.

Now set them equal, plug in $a$ and solve for $\mu$. You might want to omit all the terms with $a$ here, since that makes it really complicated. If $M$ is large, you can do that without a large error.