Relationship between temperature and energy

What is the definition of temperature in relation to energy? I'm mostly interested in general dimensional terms.

As far as dimensional analysis goes, temperature and energy are separate and independent physical dimensions.

However, there is a more or less unique way to translate temperatures into energies and vice-versa, which is by means of Boltzmann's constant

Any given temperature $T$ has an associated characteristic energy $k_\text{B}T$ at which the system's dynamics typically occur. Thus, for a mono-atomic gas at temperature $T$, the average energy of each atom is $\tfrac32k_\text{B}T$. This is a particular case of the equipartition theorem, which states that each degree of freedom which contributes 'quadratically' to the total system energy, like the $x$ component of the velocity of a single gas atom, has average energy $\tfrac12k_\text{B}T$.

Similarly, if you have a given energy $E$ you can ask for its equivalent in temperature, which is the temperature $T$ such that $E=k_\text{B}T$. It is mainly in this sense, for example that claims like "collisions in the LHC will generate temperatures more than 100,000 times hotter than the heart of the Sun" should be understood. This usage is justified since, at those temperatures, most degrees of freedom will have energies of that order.

Note, however, that despite this close relationship, energy and temperature are fundamentally different. It is incorrect to claim something like "temperature is a measure of the average kinetic energy in a system", which you see very often in popular science and middle-school level textbooks. Instead, the fundamental definition of temperature is $$ \frac1T=\frac{\partial S}{\partial U}, $$ where $S$ is the system's entropy, $U$ is its internal energy, and the funny $\partial$ symbols denote a (partial) derivative.

The quantity on the right is essentially the extra amount of entropy $\Delta S$ that you will get by adding a little bit more energy $\Delta U$ to the system, or in other words how many more states of the system will be available with a little bit more energy. This is inversely proportional to the temperature: for a fixed amount of energy $\Delta U$, a 'hot' system will have less extra states available than a 'cold' one.

(This is, incidentally, why heat flows from hot systems to cold ones: Nature tries to maximize entropy - to have as much 'playing room' as it can - and handing a little bit of energy from a hot system to a cold system decreases the number of states available to the hot system by a little bit and increases those of the cold system by more than that.)

The reason this concept is so closely related to energy is that energy is usually a convex function of the system's coordinates, and particularly of its velocities. This means that adding a fixed extra velocity $\Delta v$ will get you more extra energy at higher energies than at lower ones; equivalently, a fixed amount of extra energy will get you a bigger increase in velocity at low velocities than at high velocities. 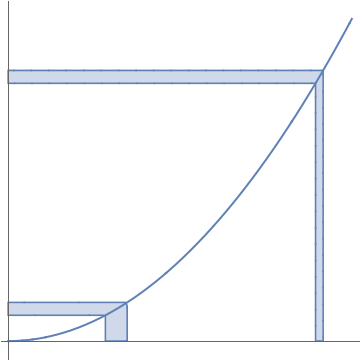 As it happens the "number of states" of the system are more or less given by the range of velocities (and positions) it can occupy, so that $\Delta S\sim\Delta v$. This means that, roughly, $T\approx\Delta U/\Delta v$, and thinner slices of $\delta v$ mean hotter systems.

Even better, in many systems the energy is not just a convex function, but it is actually quadratic, and the paradigmatic example is $E=\tfrac12 mv^2$. For a quadratic dependence, by differentiating you get that $$\frac{dE}{dv}=mv,$$ or equivalently $\Delta E= mv\Delta v$. You need to be careful with how you count things, but once you do the calculation it turns out that, in the quadratic case, the temperature as defined above is actually proportional to the average energy (instead of an increasing function of it). This careful calculation is, of course, the proof of the equipartition theorem.

Not the answer you're looking for? Browse other questions tagged thermodynamics energy temperature dimensional-analysis or ask your own question.