How to calculate the force between line of charges?

As far as I know Coulomb's law only works for point charges but what if there are not any point charges? For example, let's imagine there are three rectangles with different sizes. First one is 50 cm, second one is 30 cm and last one ise 10 cm. The distance between first and second triangle is 10 cm and the distance between the second and third rectangle is also 10 cm. If their centers are collinear what is the net force acting on second ractangle? Should I calculate it by think their centers as a point charge? I searched for it but couldn't find a clear answer.

Here is the picture of the problem for those who couldn't understand from my explanation. 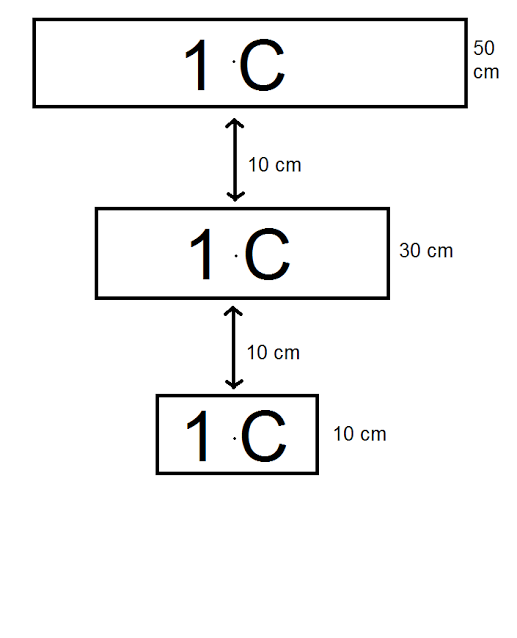 It depends how the charges are distributed in the material, and on the material's conductance. If you have a metal, the charges of the plates would be mobile and result in a hard to compute distribution. I cannot help you with that. There are probably good approximations to tackle those kind of problems but I am no expert.

If the charges are static and equally distributed among the surface, and the material has a relative permittivity ($\varepsilon_r=1$), you can use Coulombs law with respect to infinitesimal parts of the charges and integrate over them.

If you suppose that the rectangles have a width of $10cm$, the force of the top plate on the middle plate could be calculated by

As you can see, this is already quite complicated with the favourable assumptions we made. This should have an analytical solution but at the moment I am too lazy to do it. Wolfram Alpha could probably do the separate integrals and you would have to piece them together. You could then compare the result with what you would expect from point charges.

Ahh, and don't forget that there is the other plate as well. You would need to repeat the integration with opposite sign to obtain the second force and then take the difference for the total force.

Not the answer you're looking for? Browse other questions tagged homework-and-exercises electrostatics coulombs-law or ask your own question.

2
How can I calculate the force that is applied on a tube by another tube?
1
Question on electric field
3
Is the zero distance limit of Coulomb's law something to worry about?
0
Electric potential due to two spheres
1
Coulombs law and the Dual nature of subatomic particles
0
Does the same point continue to be the neutral point when the system of charges start to move closer or away?