Without a reactor vessel breach, how does radiation build-up in containment buildings of troubled nuclear reactors?

It seems that at Three Mile Island and in Fukushima, there was a build-up of radioactive gasses, and other gasses like hydrogen in the containment buildings.

Wikipedia says: The containment [building] is the fourth and final barrier to radioactive release (part of a nuclear reactor's defence in depth strategy), the first being the fuel ceramic itself, the second being the metal fuel cladding tubes, the third being the reactor vessel and coolant system.

How did radiation escape into the containment building in TMI if the reactor vessel wasn't breached?

Wasn't it the same case in Fukushima that reactor vessels were intact?

And where do these gasses come from?

My answer will mostly be a linkfest because there is substantial information available to answer your questions online. In fact, there is probably too much. As other answers have already pointed out, this is a matter of the escape of radioactive material. The best illustration I have seen to communicate the fundamentals of this can be found in slides 21 - 26 here:

The bottom line is that the fission products (FP) contain radioactivity, and these FP are contained well within the fuel rods normally. When something starts to go wrong, successive breaches of the barriers will allow more types of FP to escape, and escape farther. The important point for accidents like Fukushima is mobility. It is no coincidence that Iodine and Cesium are the main culprits - they are some of the most mobile atoms out of the radioactive FPs. They make it out the engineered barriers and they make it out the furthest. Xenon is also highly mobile, in fact, more mobile than those. Any leak at all will virtually guarantee escape of radioactive Xenon, but once it gets into the atmosphere it does not concentrate on the ground and thus won't harm people like Iodine and Cesium will.

This is a fairly general discussion. We still see occasional updates on what happened at Fukushima, and the IAEA has tried to put together an authoritative account. Here is a good summary of the most recent report:

Based upon calculations made of the measured activity outside the reactors, the IAEA made an estimate of the relative fraction of material released from each core. Nearly all noble fission product gasses (such as xenon and krypton) were released; however, these are of negligible concern, given the fact that they are chemically inert. Approximately 1% of radioactive iodine was released from Unit 1, with about 0.4 to 0.7% of the iodine released from Units 2 and 3. Finally, for other species (including cesium), less than 1% was determined to have been released into the environment; for Units 2 and 3, this was determined to be around 0.3 to 0.6% of the activity in the core.

This is a quantification of what got out of containment. How did it get out of the fuel and then the reactor vessel into containment? Well, to begin with, the fuel melted, so those barriers are toast. Then water transport between the vessel and the primary containment is entirely part of the design. 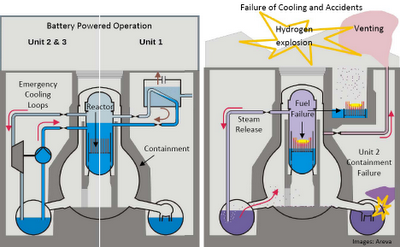 In this image, the modes of emergency cooling are illustrated, and you can basically see a direct line going from the vessel to the primary containment. This is how the FPs are transported from the fuel to the containment. Then obviously the venting and the flagrant break in containment provide a path from containment to the outside.

There are at least five ways that radioactive material can escape from a nuclear power station, beyond being removed by human action. All five depend by definition on a breach of every containment.

Four of these releases occurred at Fukushima.

The one that didn't occur at Fukushima was an explosion that takes out the reactor vessel itself - the Chernobyl phenomenon.

The four that occurred at Fukushima are:

Water leakage from the reactor vessel

When water-levels in the reactor vessel drop, exposing the fuel rods to the air, the fuel-rods melt down. The resulting corium damages the reactor vessel, leading to a breach of that vessel, and the leakage of cooling water carrying radioactive particles from the damaged and (partially) melted fuel-rods, from the reactor vessel. Further breaches in the rest of the containment (see below) results in the water entering the outside environment. The evidence is that this happened at Fukushima reactor 1: not a "major" breach by some standards - i.e. not enough for a major loss of corium - but bad enough to create a significant discharge of highly radioactive water. This may also have happened at reactors 2 and 3.

Vapour loss from the reactor vessel

When water-levels in the reactor vessel drop, exposing the fuel rods to the air and to steam, the reaction between the zirconium cladding of the fuel-rods, as they crack, and the steam and water, at high temperatures, produces hydrogen gas. If the venting of this hydrogen gas is done without injecting lots of nitrogen into the vessel first, then when the very hot hydrogen is vented, carrying out some steam vapour and radioactive materials from the damaged fuel rods, it explodes in the air, breaching the rest of the containment, and putting the radioactive materials into the outside air; this happened at Fukushima reactors 1 and 3. As @whoplisp points out, this can happen through unintentional venting, where the pressure inside the reactor vessel lifts the drywell head - the Brunswick phenomenon. (Subsequent venting at Fukushima has only happened after nitrogen injection)

Water loss from the coolant circuit

As you can see from the diagram in the answer from @Zassounotsukushi , there are pipes - the coolant circuit - between the reactor vessel and the rest of the reactor. Breaks in these pipes, and loss of containment from explosions (as above), can result in water loss from the coolant circuit; when the fuel rods have been damaged, this water carries radioactive material with it. This happened in reactors 1 and 2, and possibly reactor 3, at Fukushima.

Breach of containment in the fuel-storage pond

When water-levels in the fuel-storage pond drop, exposing the fuel rods to the air; and the containment building is breached, the fuel rods get damaged and hydrogen gets produced; as above, this can result in an explosion breaching all containment, and an atmospheric distribution of radioactive material; this happened at Fukushima reactor 4.

Fortunately, for most of the time of the release at Fukushima, the wind was blowing out to sea, resulting in the radioactive material mostly getting deposited in the Pacific Ocean rather than on land. Total estimates of the amount of material released vary hugely, and we may never know the actual values. Estimates vary between less than 1% of the radioactive isotopes present; and 50% of the Chernobyl release.

The site http://allthingsnuclear.org/post/3940804083/possible-cause-of-reactor-building-explosions describes a believable scenario. Apparently there is a leakage problem with this reactor type, when the pressure within the vessel is to high.

"It is possible that the containment pressures rose high enough to replicate the Brunswick experience by lifting the drywell head enough to allow hydrogen and other gases to leak into the refueling cavity and reactor building. If so, hydrogen could build up to an explosive mixture." However I haven't heard any follow up news on this since March.

Reactor vessel is not completely hermetical. Otherwise it would explode at some point if something goes not as expected and pressure inside increases. AFAIK, in Fukushima on a first day (before explosions) they let some (radioactive) gas out of the vessel (to confinement building) to decrease pressure inside reactor and avoid destruction of the vessel. Unfortunately, it did not help. It is a normal practice. It is better to let some radiation go out than wait for the explosion.

P.S. Of course, reactor vessel is completely hermetical during proper operation. However, "no reactor breach" is not equal to "no radioactive materials escaped".

These gases first come from the still ongoing decay. More devastating is the decay heat, which will force you to cool or vent (gas laws still apply and the vessel/containment have limits). You can shut down the fission of a (thermal) nuclear reactor pretty well, but you still have to cool for days and weeks to come.

Hydrogen can be produced later, if cooling fails: at high temperature the zirconium of the common fuel rods reacts with water to hydrogen.

We estimated an example for how much energy decay heat might produce on Fukushima #4s spent fuel pool: 15m depth were given, we reckoned cubic measurements and a maximum of 3000 m³ water in the pool. The pool was empty enough after five days that they urgently needed to refill it by helicopter/water cannon, cracks not known at this time. It takes (4kJ/K * 80 K + 2300kJ)/kg * 3*10^6 kg water ~ 78*10^12J to boil that water away, divided by five days ~ 18*10^9J/s. Give or take an magnitude for low water/the later discovered cracks that makes still something between 2 to 18 MW decay heat in the spent fuel pool alone. As far as it is known this pool was filled beyond normal capacity.

Not the answer you're looking for? Browse other questions tagged radiation or ask your own question.