Does superluminal travel imply travelling back in time?

Is this statement true?

You can not travel back in time. If I travel fast enough the clock will start to go backwards, but that does not mean I am traveling back in time. It would only mean that the time reference is producing a negative count.

One cannot travel backwards in time.

The physics data we have up to now agree completely with the special theory of relativity. This means you cannot travel faster than the velocity of light, and that you can only approach it as a limit. You will not notice a change in your clock in any measurable way within your travelling system.

Yes, this would be only your impression. E.g. when you are moving away from me then your clock is going slower from my point of view and my is going slower from your point of view. This is because as you are moving away from me the distance between us increases and the light needs longer time to reach you (and this statement is obviously symmetric when we swap me and you). Consequently, the image you'll see of me will be distorted in time and I'll appear to be doing everything slower.

If you would go at the speed of light relative to me (note that this is not physically achievable, but we can discuss this purely theoretically) then all the light from me that could reach you is originating at one moment in my history and consequently it would appear to you that my clock has stopped completely.

Finally, if you were moving superluminally, the light that I emitted as we met and any light I will emit in the future will never reach you (it is simply too slow compared to your speed). On the other hand, as you are moving away, the light that I emitted in the past (and that has already travelled some distance) does have a chance of catching up you. And the further away you move, the older light from me you'll see. Your impression will be that my clock is going backwards. But this is not the end of the story. Because if you were approaching me at the superluminal speeds then it would appear to you that my clock is going forward as usual. Until the point when our wordlines meet. Here's a quick sketch. 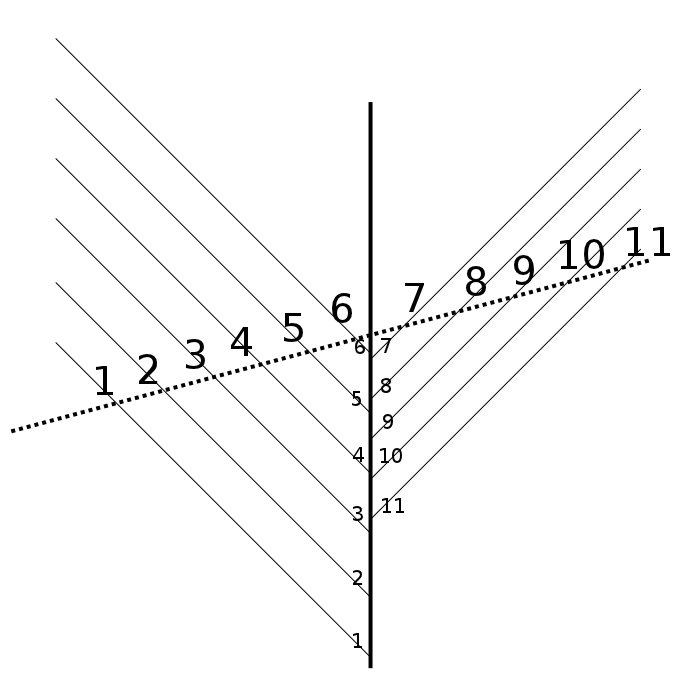 Since that would very directly break causality, this is a great argument as to why you can't do it.

So I tried to make a diagram to clarify to myself more precisely how that would go like: 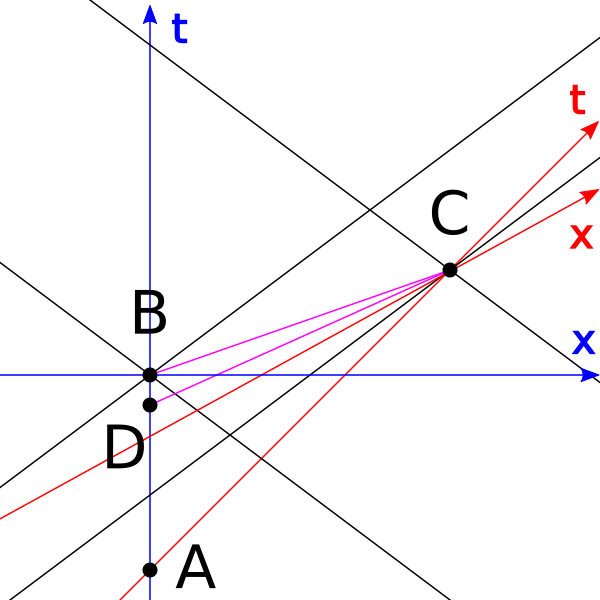 So we see that if we were able to send particles faster than light, even if they appear to be moving forward in time to us, it would be possible to send messages back in time (to a timelike spacetime point) from another inertial frame of reference.

Conversely, the spaceship observes that C happened before B, i.e. it sees the tachyon from Earch move backward in time. This is already a simpler causality problem to observe, but I wanted to show the full "send message to past" in a single diagram. To see that simpler causality issue on the diagram, you just have to add a constant time line (parallel to x of the spaceship), this is done for example at: http://www.physicsmatt.com/blog/2016/8/25/why-ftl-implies-time-travel

One way to explain why Earth and the spaceship don't agree if certain tachyons are moving forward or backwards in time is that the tachyon events are spacelike separated, and therefore can be observed in different orders by different observers.

Variants of the story to make things more dramatic:

Not the answer you're looking for? Browse other questions tagged special-relativity inertial-frames observers faster-than-light time-travel or ask your own question.

4
Why would FTL imply time travel?
1
Help me understand this example about FTL = time travel
85
What do spacelike, timelike and lightlike spacetime interval really mean?
4
How does a tachyonic antitelephone work?
2
Superluminal travel without time travel
3
Does time actually exist or is there just a single stateful system being updated over time?

5
Time travel in the past
0
Do wormholes really allow us to travel back in time?