I attempted to simulate the interaction of a moving particle and a potential well in Mathematica. The particle should experience a force of -$1/r^2$, if the equation for the potential well is -$1/r$. The inputs for the NDSolve function are:

A kind of spiraling motion or trapping should happen when the particle approaching to the well in a certain angle. But it does not happen in this simple simulation. The particle must experiences some centrifugal force when it is close to the well so that its direction is changed. What other terms should be added to represent this force in the NDSolve function? Any idea or any help would be much appreciated.

What I got is:

What expected to see is:

By adopting the suggestions given below, the terms for the NDSolve were now modified as follows:

and sliders were added for adjusting. Still, no conic trajectory was observed. The particle moves as if in a straight line from the top view.

Your NDSolve inputs seem to be doing what I would expect for a mass around a gravitational center. Using:

where the gravitational center is at 0,0 and the mass is at (x,y)=(1,0) at t=0, I get a series of bounded and (probably) unbounded orbits of various sizes over a range of initial velocities: 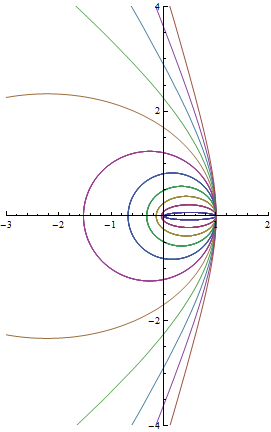 As @alemi stated, there will be no spiraling in unless you include a damping term. The orbits for this type of potential are either unbound (fly-in then fly-out) or are closed loops.

Notice the shift by 'a' and 'b' in the numerators, not just the distance calculation in the denominator. The equations worked in my test because I placed the potential well at (0,0) and moved the mass off axis.

If your potential is $\propto 1/r$, you're effectively simulating gravity. If it gives you better intuition, imagine it as the earth around the sun.

As long as your numerical solver is doing a decent job, you shouldn't expect the ball to spiral in, the correct solution would be a conic section, that is it would orbit the origin in an elliptical path if the initial conditions equate to a bound energy, or a hyperbolic one if the initial conditions equate to an unbound energy. The sketches you post suggest you are in the unbound case, so, even to see orbits you need to decrease the magnitude of your initial velocities.

This is of course only true long as you were using a symplectic integrator (one that conserves energy, which I imagine Mathematica uses by default). A weak integrator like simple Euler would have the ball spiral in, but this is a purely an effect of the poor integration.

If you truly want it to spiral in, you need to add some kind of viscous damping term

or something like air resistance, a force of the form

Additionally, after you're update, it is clear that you are still shooting nearly straight at the origin with too high a speed. It is as if you are modelling gravitational scattering, not orbits. You are varying your initial speed, not your initial velocity. To be completely general, why don't you set

As for what value the initial speed should be, you can consider the initial energy to get a sense of the appropriate magnitude. At $t=0$, you have

Not the answer you're looking for? Browse other questions tagged gravity potential simulations computational-physics or ask your own question.

2
Force exerted on potential wall
4
Unexpected eccentricity in moon orbit simulation
1
Infinite potential well and spin $\frac{1}{2}$
3
Potential well for gravitational waves
4
What are the energy eigenvalues of a particle subject to the potential $V(x)=mg|x|$?