As mentioned in the other answers, if the medium is linear then the refractive index is independent of the intensity of light, and the intensity can be related to the electric field amplitude through $I = \frac{nc\varepsilon_0}{2} E_0^2$.

However, that does not mean, as the (incorrect) accepted answer implies, that the intensity "depends linearly on $n$". If you shine a laser through a piece of glass, the beam does not magically get more intense in the region with higher refractive index; instead, the intensity remains constant (it is an energy flux, and energy is conserved), and the electric-field amplitude $E_0$ decreases.

As such, in the linear-optical regime, and absent reflection losses at the boundary between media, the intensity does not depend on the refractive index.

Having gotten over the boring part, however, and addressing the broader issue raised in the question's title,

To be more specific, this happens when the light is intense enough that nonlinear effects can kick in, because of something called the Kerr effect: if the intensity is high enough, then the refractive index will increase by a small amount $\Delta n$ which is normally proportional to the intensity: $$ n(I) = n_0 + n_2 I. $$ This is important, because when lasers reach that kind of intensity, this typically only happens in the middle of the beam, and there the added $\Delta n$ makes the medium seem optically thicker, much like a convex lens would (an effect known as a Kerr lens), so it will tend to focus the beam into a tighter spot.

So, what happens if you focus the beam more tightly? Well, it will get more intense, so the self-focusing will increase and the Kerr lensing will get more severe - and if you're not careful, you can get into a regime with runaway self-focusing where the beam gets tighter and tighter until the intensity exceeds the damage threshold of the material and you burn a hole in your medium. And, if it's not your lucky day, the light will then diffract off of that hole only to re-self-focus a bit further down the line, and eventually it will destroy your entire beamline. 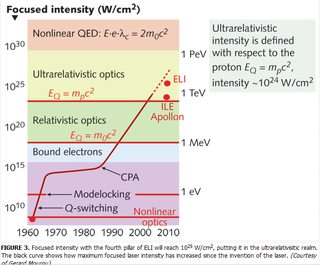 To emphasize the importance of this, if you look at the largest available peak laser intensity over the past few decades, there's a very, very flat line lasting some fifteen years between the late sixties and 1985: this is the threshold where self-focusing makes it impossible to amplify the light further without the laser destroying itself, a problem which was only solved with the advent of chirped pulse amplification.

For a more recent take on that topic, see What is Chirped Pulse Amplification, and why is it important enough to warrant a Nobel Prize?

So, the intensity depends linearly on the refractive index.

The other answers here seem incomplete, because they ignore how you might actually do an experiment. The formula in question is correct, as is the response saying equivalently $I=n\times c\times \epsilon_0\times E_0^2/2$, but if you only ask what happens when you raise $n$ without considering what happens to $E_0$ you will get the wrong idea. The equation seems to say that if n increases then the intensity will increase. But actually, if you go from air to water the Fresnel equations show that $E_0$ changes by a factor $2/(1+n)$ where $n$ is the water refractive index, so Intensity changes by a factor $4n/(1+n)^2$ which is always less than one (for positive $n$).

So is it safe to say that the intensity of light depends on the refractive index of the medium?

When light ray enters a dielectric with higher $n$, only part of the light energy will "get in" and propagate inside the dielectric. So intensity inside may be less than intensity outside, despite higher $n$. It depends on what percentage will get through the boundary, which in turn depends on the details of the angle of incidence and quality of boundary.

The answer can also depend on whether one wants to include the energy of the excited dielectric matter into the definition of light intensity, or consider it separately (this may make sense, since part of it is essentially kinetic energy of charged particles, not EM energy).

0
When light is moving from a less dense medium to a more dense medium, does the reflected ray ever have a higher intensity than the refracted ray?
293
What is Chirped Pulse Amplification, and why is it important enough to warrant a Nobel Prize?
2
Does intensity of light change during refraction?
1
Explain the mathematical expression of Ultrashort pulses