Spin-½ and beyond: Measuring spin components other than ± ħ / 2: How to formulate the probability function?

the particle (in either spin state). However, with this theory, it is also

are ± ħ / 2. If we do assume that the spin state of a particle is well defined,

even if it is not observed,how would we formulate a function to determine the

as the 3/2 delta baryons)? Are the results in any way linked to an overlapping of

the hemispheres in the various spin states? In addition, if it were ever

necessary, could we formulate such a function for particles with an even higher 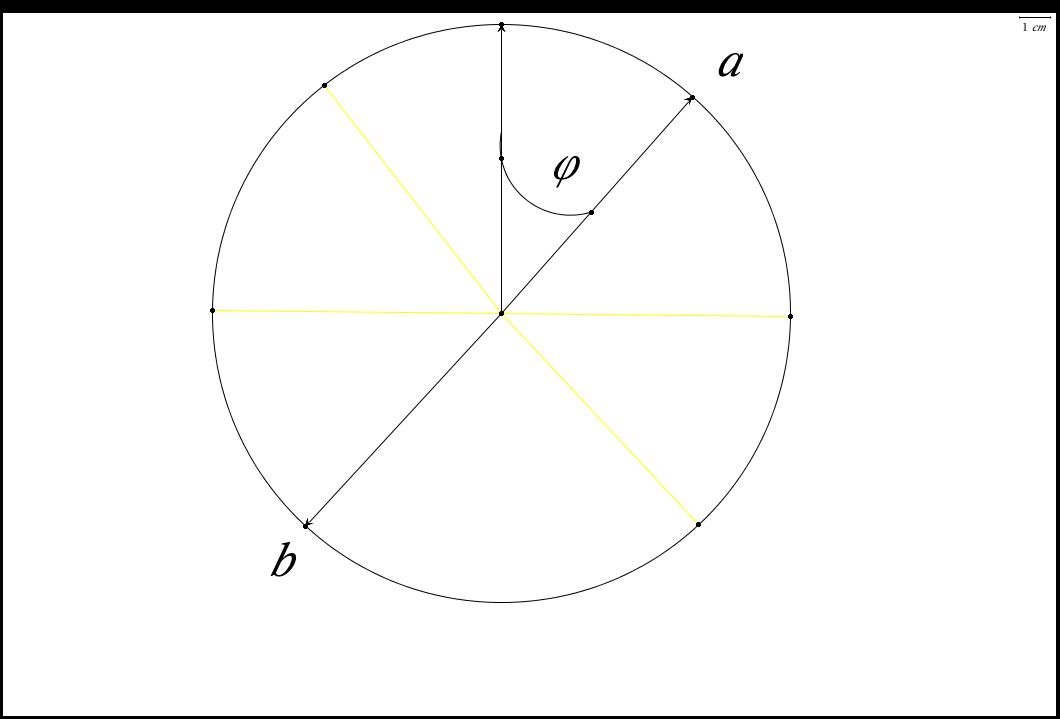 Here we see a visual of this theory. The spin components of particles (a) and (b) have an angle between their vectors, $\phi$. Using this, we can see that the probability of finding both particles in a certain spin state is proportional to the overlap of their hemispheres.

$\textbf{These calculations are mine, but I thought that it made sense intuitively }$

This is the basic Idea behind the Hemisphere mathematics I described to you:

The expected value will be denoted as $\langle\sigma^{(ab)}\rangle $ and:

This spin values are relative to a set field direction that corresponds to a Stern-Gorlach apparatus.

Now, if we denote angle between the spin states of 2 particles as $(\phi)$, the probability of observing both of the particles in a down state with be equivalent to $(P(u,u)=(P(d,d))=(\cfrac\phi\pi)$

Therefore, the proportionality coefficient has to equal (1) when $\phi=\pi$ and the probability of finding the particles in two different spin states will be $P(u,d) = x\phi + y$

Just like $j=1/2$ (spin-half) particles have two-complex-component wave functions, spinors, particles with spin $j$ have $(2j+1)$-dimensional wave functions describing the spin degrees of freedom. The dimension is what it is because $j_z$ always goes from $-j$ to $+j$ with the spacing equal to one.

All the transformation rules under rotations may be extracted from the representation theory of Lie groups, in this case $SU(2)\sim Spin(3)$, essentially $SO(3)$. The $(2j+1)$-dimensional representation for spin $j$ is the symmetric tensor products of $2j$ copies of the $j=1/2$ representation.

For $j=3/2$, we get a particular four-dimensional complex representation, i.e. four complex probability amplitudes describing the spin with respect to the $z$-axis (which may however be translated to amplitudes to any other axis, using well-defined rules).

There are lots of relationships between different representations of different (or isomorphic) groups.

Not the answer you're looking for? Browse other questions tagged quantum-mechanics angular-momentum wavefunction quantum-spin group-representations or ask your own question.

3
Spin state of electron after measurement
4
Can different components of a wavefunction become entangled with different systems?
4
Positional probability density for combined spin and position states
1
For a general state vector, does the probability of finding the system in spin up/down change based on direction?
2
Why can't we infer the amplitude of the spin vector components from the spin probability when the latter is 50%?
0
What is the relationship between wave function and classical distribution function?
0
How can you prove that the squares of the expected values of the three components of spin sum to 1?