What physical phenomenon occured in this experiment?

I noticed a strange behavior of my experiment. I have a glass container with a fully saturated solution of CuSO4, which I use to grow CuSO4 crystals, by waiting for the water to evaporate. Recently I noticed that crystals were build above water surface and outside of the container. After some time I noticed that half of my solution ended up on the table and floor creating a big blue pool. It looked almost like the behavior of a super-fluid, which can creep out of its container. I removed the crystals using a paper towel, but after some time the same thing happened. Once the crystals go over the edge and below the water line on the other side, the fluid goes outside quite quickly. Just like if you put an inverted U-pipe into a container. Once you force the liquid to start going, it will continue to flow by itself. 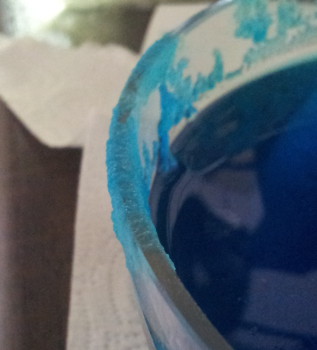 Can you explain what physical phenomenon(s) is/are happening here? Is it some sort of capillary action?

This looks like a combination of capillary action and evaporation. When the container starts out clean, moisture evaporates from the edge of the miniscus, thereby leaving crystals. These crystals form capillary pathways for more fluid to climb just above the crystal, where it evaporates and forms more crystal. This process repeats so that the crystal "climbs" up the inside wall of the container. Eventually the crystals get to the rim and down the other side, where they form a pathway for fluid to go up and over the rim and make a puddle below the container.

To avoid this use a container that the fluid repels the fluid. Ideally you want the miniscus to go down at its edge, not up like with your container. I'd try teflon and see how that does. Super clean glass might work, or at least be better than the rusty cauldron you seem to be using. Perhaps smearing a ring of something hydrophobic, like the right kind of grease, in a ring above the fluid will act as a barrier to the growing crystals.

It would be fun to take a time lapse sequence of this process in action. I think you'd see the crystals growing up the inside, then down the outside more rapidly.

Not the answer you're looking for? Browse other questions tagged home-experiment crystals or ask your own question.

29
Is this kids experiment a legitimate way to show that air has mass?
6
Movement of a cylinder filled with water
5
What is the simplest way to perform a Cavendish experiment?
25
A curious phenomenon with a stick
0
What is causing this colour in my milk?