Variation - Electric pressure on a sphere?

I solved the following question(Answer is correct):

Find the force with which two hemisperical parts of a uniformly charged hollow sphere repel each other?(charge density: +$\sigma$) 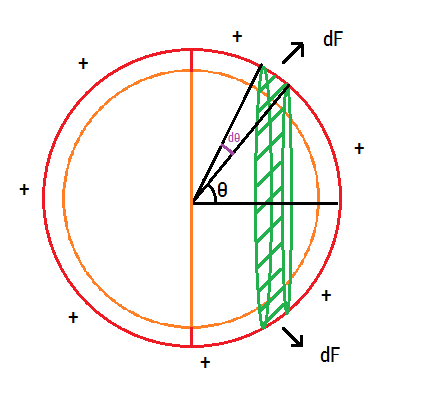 My question is: If the hollow sphere is uniformly charged on one half with a uniform charge density $+\sigma_1$ and its other half is also charged at charge density +$\sigma_2$.Now find the force with which the two halves repel?

Similiar to previous question force can be given as: $$F=\int \frac1{4\pi\epsilon_0}\sigma_1\sigma_2dS_1dS_2$$ But it doesn't give the answer, or I must say it can not be manipulated to an integrable form.Note that this is not a problem of integration.It is simple manipulation, as my teacher says, he suggests using previous problem.

Hm, I would give superposition a go.

The crucial insight now is that the ratio of these forces must be the same as the ratio of the charges of the right hemispheres because (also a consequence of the superposition principle) the force on a system, all other things being equal, scales with the charge on it! This means that:

With that insight, we can say that the charge on each hemisphere scales with $\sigma$, and so in general that the force must scale with $\sigma_1\sigma_2$ since the charge is just the integral of surface charge times area.

Finally, we look at the case where $\sigma_1 = \sigma_2$, for which we have the result that you proved:

Now since we are looking for an expression of the form

which is the result you were looking for.

Take two sets of hemispheres. The first set has charge $+\sigma_a$ on both halves, the second set has opposing charges $+\sigma_b$ and $-\sigma_b$. Now the force for the first pair scales with $\alpha\sigma_a^2$, and the second with $-\alpha\sigma_b^2$ where $\alpha$ is the constant of proportionality (which you computed as $\frac{\pi R^2}{2\epsilon_0}$)

Now since we know the force due to each component, we can compute the total net force. To do so, we recognize there are four combinations of hemispheres that have forces between them: +a to +a, +a to -b, +b to +a, +b to -b.

We don't know how to compute +a to -b and +b to +a - but since their signs are opposite, we know the forces, whatever they are must cancel out (by symmetry). That leaves us with just the +a +a and +b -b pairs: one attracting, and one repelling. Thus we write the force between them as

Giving the same result as before.

I would like to introduce an approach by complementing the hemisphere.

Of course it also comes from superposition, but it's another way to view the problem.

Not the answer you're looking for? Browse other questions tagged homework-and-exercises forces electrostatics or ask your own question.