What does the $y$-axis represent in the atomic spectra and what is its significance? 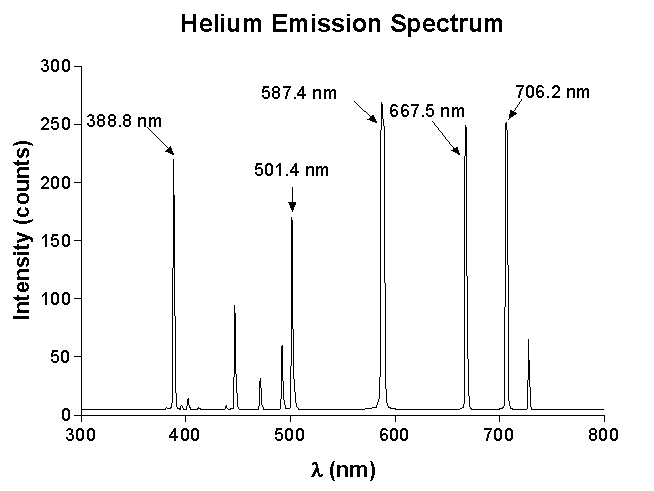 The picture is an emission spectrum of Helium. The spectrum has sharp lines (peaks) at certain wave lengths characterizing it as helium. Agreed that it characterizes Helium as atomic spectral line characterize gases and they are based on allowed energy states of electrons in an atom.

Well and good, but what i don't know is the $y-axis$. what does it represent? It is shown as intensity (counts) but I want to know what it is and how does it vary from element to element. Does this count also characterize the elements, or is it same for all elements? Appreciate if you could throw some light on it.

Question : I mean if i keep the position of lines(pulses) same but change their relative amplitudes, what happens? does it represent a different gas?

Picture taken from the internet.

Here is the spectrum taken as a photo:

Note the difference in the visible intensity of the lines registered. In your spectrum instead of a film there is a counter which measures the number of hits at that wavelength from the excited helium.

The location of the excitations on the wavelength axis identifies the atom uniquely, like a fingerprint a person to the police. The intensity/counts is secondary to the identification, though it is characteristic it can depend on the intervening medium ( glass, air, space dust for astronomical observations).

It is what it claims to be: intensity of light at that wavelength.

However there are a lot of different ways to measure intensity. The "proper" way might be to measure the emitted power in watts into a particular wavelength bin, but that takes a lot of careful algebra and calibration to get right. If your light meter is a digitized CCD readout, however, it probably has an intensity measure for free that has been calibrated at the factory: each pixel on the CCD reports one1 number, where 0 means "no light struck this pixel" and some maximum number2 which means "this pixel received more light than it was able to record"). If you only care about those numbers along one dimension, you can make a plot of them instead of a two-dimensional image.

To show you how straightfoward it really is, here's the example spectrum from anna v's answer. I've taken a row of pixels near the middle of the image (row 60, actually, marked by the arrows) and plotted their red, green, and blue components on a graph. You can see that the blue lines have more blue than the other colors, that the red lines have more red than the other colors, and that the yellow line near pixel 160 is the brightest and is actually saturated (note the flat top and the artifact where the blue "shoulders" are dimmer than the background). You can imagine that I might get a more detailed spectrum graph if I just added up the numbers from all 120 rows of pixels in the image.

Other types of detectors may actually count photons one at a time, in which an axis that's labeled "counts" may actually mean "we counted this many photons in this wavelength bin." You have to read carefully to find what authors mean sometimes. 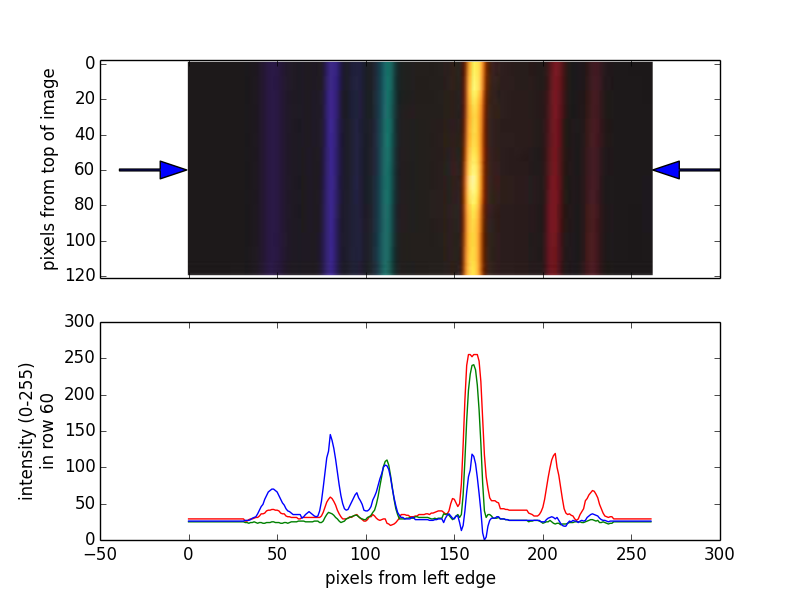 1 Actually a color CCD will report three numbers, one each for the red, blue, and green sensors nearest a given pixel. You can think of it as giving you three images with the same geometry.
2 If the analog-to-digital converter has $n$ bits of precision the maximum value is $2^n-1$. For 8-, 12-, 16-bit ADCs you get numbers between zero and 255, 4095, 16327.

As for the physics content of your question, each spectral line ideally has three parameters: a location, a height, and a width.

You are basically asking about nebular astrophysics!

The intensities of each individual line (and by that I mean integrated over the line profile), are proportional to the number of radiative transitions in the gas taking place between between two particular energy levels in the atom/molecule/ion and have a complex dependence on (a) the temperature of the gas, (b) the density of the gas, (c) the quantum mechanics of the molecules/atoms/ions that determine how likely it is that transitions between energy levels will take place (often characterised by oscillator strengths or "Einstein coefficients"), (d) the cross-sections of molecules/atoms/ions to collisional (de)excitation and (e) what assumptions can or can't be made about thermodynamic equilibrium (i.e. whether the populations of each energy state is constant in time), or whether the gas is effectively transparent to its own radiation.

If this sounds complicated - it is. Often the only approach to interpret such a spectrum is to construct a numerical model using the above as input, often with the goal of estimating the temperature and density of the gas. Sometimes though, simplifying assumptions can be made such that simple ratios of line intensities can be used to estimate these quantities.

So to more directly answer your question - each element has its own pattern of lines and the relative strengths of those lines will depend on the pressure and temperature of the gas and the details of the atomic structure of the element in question. There is no straightforward relationship between the wavelength of the line and its intensity.

Not the answer you're looking for? Browse other questions tagged quantum-mechanics atomic-physics spectroscopy or ask your own question.

2
How do you assign an observable to spectral lines in Heisenberg's resolution of Rydberg-Ritz?
1
What does the Atomic Form Factor mean?
2
What determines the wavelengths of the emission spectra of elements
7
What are good, reliable databases of atomic spectra?
0
In what sense are boron and carbon the simplest examples of degenerate atomic ground states?
4
How can we explain the broad features of this guitar spectrogram?
0
What does this graph represent?
10
What do atomic orbitals represent in quantum mechanics?
1
Is my understanding of the limitations of the Bohr model related to atomic spectra correct?