Speed of sound in gaseous medium

Why does the speed of sound decrease as the density of the medium increases? I know why this happens mathematically, but I want to know what happens at the molecular level that results in higher speed in solid. Could somebody explain that phenomenon, taking into account density and elasticity?

There is both a rigorous and intuitive explanation for the dependence of the speed of propagation of mechanical waves and the density of the medium.

Intuitively: You know that sound waves are longitudinal waves, resulting from a collective oscillation of the medium's molecules. When sound's propagating, it compresses and re-expands the air molecules, as one group of molecules is compressed, the previous group re-expands itself(after having passed on its excitation energy), so you can imagine that if you have very dense air already, you very much have exhausted the possibility of air molecules to compress-re-expand themselves. This in turn reduces the speed of propagation. 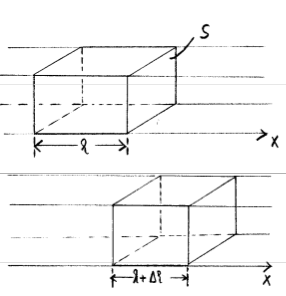 Second: Acceleration. Each element of volume $dV$ of the gas is accelerated during the passage of the wave, so for any case, you always set out the fundamental principle of dynamics (considering the longitudinal deformation of a portion $dx$ of the gas to $dx+d\epsilon$): $$\frac{\partial F}{\partial x}dx=dm \frac{\partial^2\epsilon}{\partial t^2}$$ From here it is clear that $dm$ is replaced with $dV \rho$, using $dV$ expression in first step of deformation, you reach the equation of propagation of waves: $$\frac{\partial^2 \epsilon}{\partial x^2}=\kappa \rho \frac{\partial^2 \epsilon}{\partial t^2} $$ From which we know the coefficient of the right hand side is $\frac{1}{c²}$, with c the speed of propagation. To conclude, you should always find out how a change of density, will modify the deformation of the medium caused by the passage of the wave. $$c_{gas}=\sqrt{\frac{1}{\kappa \rho}}=\sqrt{\frac{\gamma nRT}{\rho V}} $$ Where $\gamma$ is a constant depending on the nature of the gas, and $n$ number of moles in the gas, the second expression is obtained using the law of ideal gases: $$PV = nRT$$ and $1/\kappa$ replaced by $\gamma p$

Like Ignacio Vergara Kausel mentioned in his answer when the density increases the mean free path of a molecule decreases. And shorter mean free path means more collisions and therefore a higher frequency that molecules collide under an angle, lowering the mean velocity and thus the speed of sound.

Not the answer you're looking for? Browse other questions tagged acoustics speed or ask your own question.

26
Why does the speed of sound decrease at high altitudes although the air density decreases?