What is the relation between photoelectric current and frequency of incident light?

Speculation 1: If saturation current is not reached, then radiation with higher frequency will give greater photoelectric current.

Reason 1: Greater frequency means greater velocity of electrons, which will help them to counteract "space charge" and more electrons can reach the anode.

Problem 1:Let's say the intensity (W/m²) of the radiation remains the same, and only the frequency increases. The intensity multiplied by the Area of the plate results in the total energy that arrives the plate in each second. So IA = E/Δt, where E = nhf (n photons of frequency f) Let's say each photon is able to pull out one electron from the plate, so the current i = ne/Δt, where e is the charge of the electron. That gives n/Δt = i/e, and IAe=hfi -> i = IAe/hf, so when we increase the frequency, if the intensity of the radiation remains the same, the current decreases. Is this right?

Are my speculation and reason correct? And please help me to resolve my problem ?

Well it may help to first simply consider the famous the photoelectric effect, and see how photon frequency $\nu$ is related to the photoelectron's kinetic energy, once you are sure you understand up to this point, then we can move on to your question on photoelectric current. 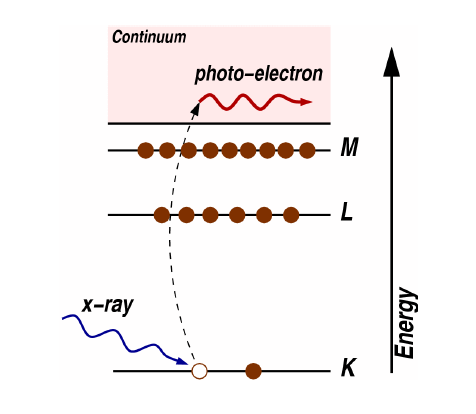 The picture is a typical diagram used to elaborate on the photoelectric effect, where the photon's energy $h\nu$ has to be larger than the electron's binding energy to its atom usually denoted as work function $E_0$, only then a photoelectron is created. As for its kinetic energy, just make use of the Energy Conservation in photoelectric effect: $$h\nu = E_0 + \frac{\hbar^2 k^2}{2m} $$ where the second term in the right hand side is the kinetic energy, $h$ Planck's constant, $m$ mass of the electron and $k$ its wavenumber (momentum $p=\hbar k$)

Now back to our photoelectric current:

When a photosensitive surface is subject to incident light (x-ray for example), photoelectrons can be ejected from the surface (metallic surface) if the photons' frequency is high enough to reach the necessary work function of the metal, then electrons can be ejected, and now you should already know how to define their kinetic energy. It is important to note again that the maximum kinetic energy depends on the frequency of the photons and not the intensity of the ray.

Next step: if the electrons now reach a collecting plate, a current can be detected. Furthermore if an external retarding potential is placed between the metallic surface and the collecting electrode, the current can be reduced, because at high enough potentials, even the fastest electrons will be prevented from reaching the collector. With the potential $U=qV$ (charge $q$, the voltage $V$), the work-energy theorem is written simply $W = \Delta KE = -\Delta U$. The electron starting from rest, strikes the plate at zero potential relative to its first plate: $\Delta KE = \frac{1}{2}mv^2$ and $-\Delta U = qV$, so an electron failing to reach the plate, must have had a kinetic energy of $KE = eV$, where $eV$ is the work done on charge moving through the retarding potential V. The kinetic energy of the fastest electrons can then be obtained by finding the critical retarding potential necessary to reduce the current flow to zero: $$eV_{crit}=h\nu - W $$

Finally as for the intensity of the ray and current saturation, if the intensity is high enough (very high number of incident photons) then all the electrons get the chance to be ejected (assuming $\nu$ high enough) and contribute to the current, once all possible electrons are ejected from the plate, saturation current can be reached.

This overview should give you the necessary tools to mull over your next questions on your own, but feel free to ask if you face new "understanding" problems.

Your Speculation 1 is not really true, whereas what you consider in Problem 1 is correct.

The probability of a photocathode to emit an electron upon incident photon is called quantum efficiency. Contrary to your intuition, it is relatively constant for the range of wavelengths to which the photocathode is sensitive and it drops quickly outside of this range, see the picture below (taken from Hamamatsu webpage).

I don't know if this property is true for all other materials - it is possible that people specifically looked for materials with flat photoefficiency spectrum to be used as photocathodes.

When you consider photocurrent produced per unit of light power, indeed, you have to take into account that there are less photons per Watt for shorter wavelengths. See how photo sensitivity look like when plotted on mA/W scale and note black curves of constant quantum efficiency: 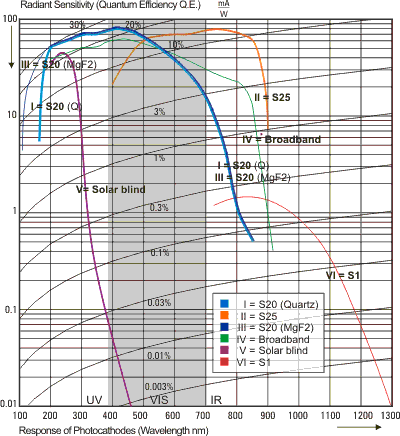 From the I-V graph, at a given applied voltage (between the stopping voltage and the saturation voltage), a higher frequency corresponds to a higher photocurrent.

I think what happens is the space-charge acted as the supplier of electrons rather than the cathode as the supplier. Also, high freq means higher KE so the electrons from the space-charge have higher chance to reach the anode; especially when the applied voltage is negative. Sorry no reference. I tried to Google this for a while but couldn't find anything. This is just what I came up as I have been pondering on this topic.

So speculation 1 is correct, Reason 1 not quite correct as I explained above. The liberation rate=current per charge equation in Problem 1 only holds if all liberated electrons are used as charge carriers for the photocurrent, in other words the photocurrent has reached maximum.

Hope this helps and if my thinking is incorrect, please let me know. Thanks.

Not the answer you're looking for? Browse other questions tagged photoelectric-effect or ask your own question.

59
Can the photoelectric effect be explained without photons?
1
Photocurrent's dependence on frequency
2
In Einstein's Photo Electric Effect, variation of frequency while keeping Intensity constant
0
Frequency plot with photoelectric current and anode potential