Leading-order cause of diurnal (not semidiurnal) variations in $g$?

The following graph shows the result of a very impressive differential measurement of the gravitational field in Boulder, Colorado, over a period of a couple of days. 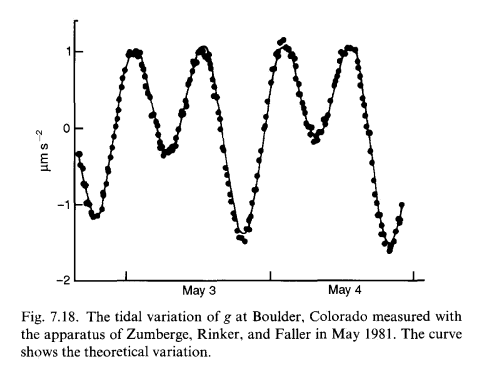 Floris got it from a description in a book and posted it as part of an answer to this question. Based on the caption, I'm guessing that the experiment was described in this paper by Zumberge, which I don't have access to.

There is excellent agreement between theory and experiment, and the main features of the graph are these two Fourier components:

In addition, there is a slower trend, which I assume comes from interference between the solar and lunar effects.

Assuming a perfectly rigid earth, no solar effect, no effect from ocean tides, and a two-dimensional geometry, my calculation in this answer gives the following for $g_Z$, the apparent field when the moon is at the zenith, and $g_N$, when the moon is at its nadir.

I gather that ocean tides can have not just a semidiurnal component but a diurnal one as well. I don't know why this is. Whatever the mechanism is, conceivably that same mechanism would also cause the diurnal effect observed here. I assume that the gravitational field of the ocean is not itself responsible for the effect observed here, since the experiment was done in Boulder, Colorado.

The spectacular agreement between theory and experiment shows that the diurnal experiment must be well understood theoretically. What causes it?

I believe the explanation can be found in Manual of Harmonic Analysis and Prediction of Tides :

The key here is the fact that the earth's axis is at an angle relative to the plane of the sun, and that in general the moon will not be in the same plane. Thus, there are two sets of bulges - but they will be not be symmetrical with respect to the equator. What you are seeing then is the fact that a typical point on earth (away from the equator) will be closer to one bulge than the other...

In this picture you can see that for a given latitude away from the equator, you will "see" more of one bulge of the tides than the other. This asymmetry is present for both the lunar and the solar tides (although to different degree, given that the moon's orbit is tilted differently). The result is a 24 hour component.

This is described very well at http://oceanmotion.org/html/background/tides-types.htm - confirming that the tides become more symmetrical when the moon is over the equator, and less so when it moves towards the tropics of Cancer or Capricorn.

Quoting from that reference:

Different types of tides occur when the moon is either north or south of the equator. Whereas semidiurnal tides are observed at the equator at all times, most locations north or south of the equator experience two unequal high tides and two unequal low tides per tidal day; this is called a mixed tide and the difference in height between successive high (or low) tides is called the diurnal inequality. When the moon is above the Tropic of Cancer or Tropic of Capricorn, the diurnal inequality is at its maximum and the tides are called tropic tides. When the moon is above or nearly above the equator, the diurnal inequality is minimum and the tides are known as equatorial tides. When the moon and its associated tidal bulges are either north or south of the equator, most points at high latitudes in theory would be impacted by one tidal bulge and would experience one high tide and one low tide per tidal day. This so-called diurnal tide has a period of 24 hrs and 50 min.

If you are interested in the math, you might want to spend the time decoding this program which implements the equations and shows good agreement with observations.

EDIT I got curious and converted the code at the link above to Python (so I could run it). Then I ran it for three different cases. The Y axis is in microgals ($1\ gal = 1\ cm/s^{2}$ - the galileo is the common unit in this field). The units on the X axis are hours - but the date is wrong (I had some trouble initially adapting the code properly - I believe these plots might correspond to January 1981, but I am not certain. The effect, however, is real.) 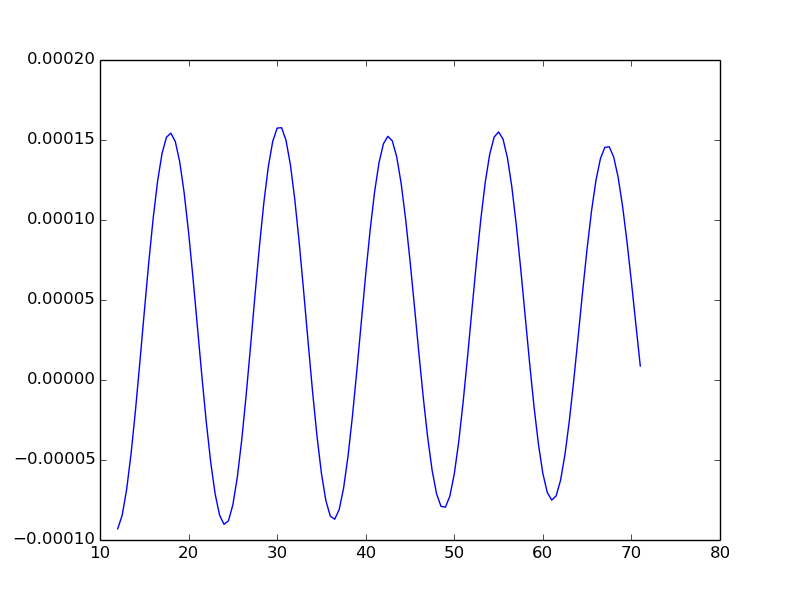 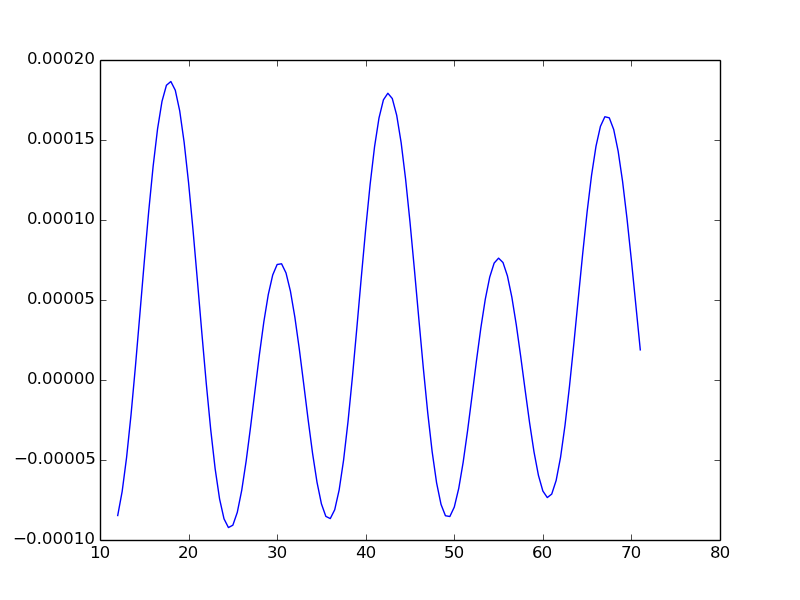 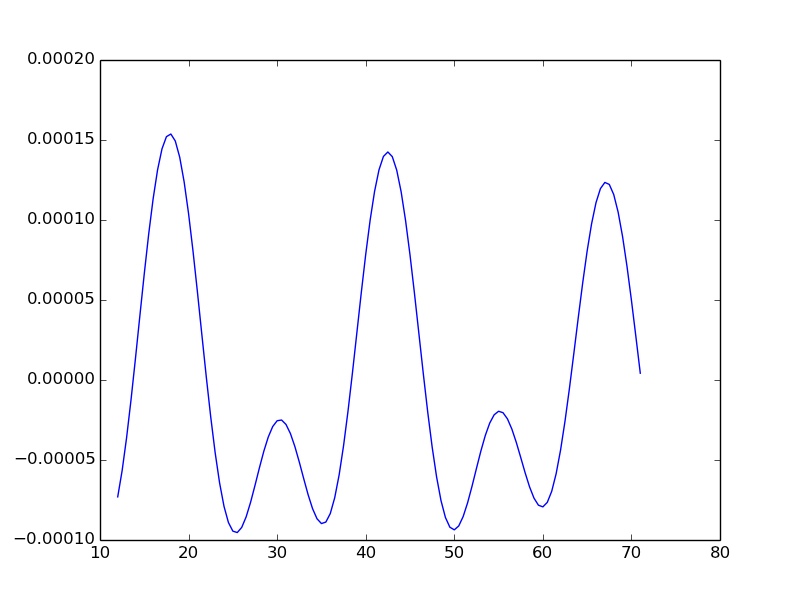 It is pretty obvious that the asymmetry between the tides is a function of the latitude, just at my picture above would predict, and although there are clear discrepancies between this plot and the one in the original paper, the general shape and magnitude is the same - especially for latitude 40 (Boulder is at 40 degrees latitude). I think we have found the culprit.

I had some problems getting the output from my program to match the figure; but I figured it out. Here is the overlay of the data with the output of the program for May 2/3/5 1981 for latitude 40, longitude 105: 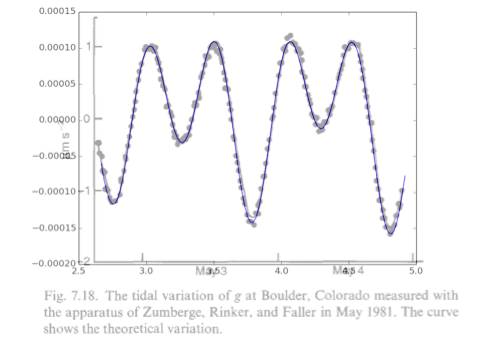 And here is the Python code (note - I took the BASIC code and adapted it as little as possible... this is not being offered for code review, just for reference!)

I posted a link to a summary paper on tides in a comment yesterday. That paper is Agnew, D. C. (2007), "Earth Tides", pp. 163-195 in Treatise on Geophysics: Geodesy, T. A. Herring, ed., Elsevier. That paper contains the answer to your question.

I don't know how long that link will last, so I'll summarize some of what Agnew described. This is a summary paper; there's nothing new here. Much of this is 100 years old or older. The key work on this was done by Sir William Thomson, George Darwin (Charles's son), Doodson (google "Doodson number"), and A.E.H. Love (google "Love number", but watch out for the mis-hits.)

Suppose the Earth is some distance $R(t)$ from a gravitating body of mass $M$, measured center of mass to center of mass, and suppose the angle between the line between those two bodies and some point of interest on the surface of the Earth is $\alpha(t)$. The gravitational potential energy due to the gravitating body at that point is $V(t) = \frac{GM}{\rho(t)}$ where $\rho(t)$ is the distance between the point of interest and the gravitating body. (Note: I'm adopting the convention that potential energy is positive, which is fairly standard in treatises on the tides.) Assuming a spherical earth of radius $r$, $\rho(t)$ can be written in terms of $R$ and $\alpha$

We want to omit the $n=0$ and $n=1$ terms. The $n=0$ term can be omitted since it has no gradient (we ultimately want force), and the $n=1$ term is the potential at the center of the Earth. Thus the tide generating potential is

The next step is to re-expand this in terms of spherical harmonics. That angle $\alpha$ is a function of where the gravitating body is in space and time, how the Earth is oriented in time, and the latitude and longitude of the point.

With a lot of work, the $n=2, m=2$ term of the spherical harmonic expansion leads to three harmonics with angular frequencies of $2\Omega$, $2\Omega-2\beta$, and $2\Omega+2\beta$. These are the semidiurnal tides. The third term is typically negligibly small. With multiple gravitating bodies, all will contribute a term to the twice per sidereal day ($2\Omega$). This is the semidiurnal lunisolar tide, also fairly small. The $2\Omega-2\beta$ term is huge. For the Moon, this is a period of 12.42 hours. For the Sun, it's exactly 12 hours.

With even more work, the $n=2, m=1$ term of the spherical harmonic expansion leads to three more harmonics with angular frequencies of $\Omega$, $\Omega-2\beta$, and $\Omega+2\beta$. The $\Omega$ term once again comprises contributions from multiple bodies. The $\Omega-2\beta$ terms are unique per body. These are the diurnal tides, and they are what you are seeing in that graph.

The picture becomes much more complex when you get rid of those spherical cow assumptions.

An overview of how to do the tidal corrections is at http://gravmag.ou.edu/reduce/reduce.html (from Googling 'gravity tide correction'). You might also follow up looking at http://www.applied-gravity.com/gb/html/tides.html.

From http://eclipse.gsfc.nasa.gov/phase/phases1901.html one can see that May 4th of 1981 (the Zumberge paper) was a new moon. For the first link provided, the timescale is relative to March 25th, 1993, which is two days after the new moon. The second link shows the tidal variations over a full month (September 2003, 9/25 is the new moon).

26
How does Zumberge's 1981 gravitational measurements relate to gravitational waves?
53
Are we slightly lighter during the day and slightly heavier at night, owing to the force of the Sun's gravity?
48
Are there tides in the atmosphere?
5
Variation in measurements of $g$ on the Earth's surface due to the Moon's gravity

5
Why in Newton's law of gravity, we do $M_1 \times M_2$ and not $M_1 + M_2$?
57
Why is the Moon considered the major cause of tides, even though it is weaker than the Sun?
0
Energy variations of cosmic background radiation
0
Could a causal mass decrease cause antigravity, i.e. repulsive gravity?