Why is 55-60 MPH optimal for gas mileage of a passenger car?

My driver's education teacher back in high school said 55 MPH is optimal for gas mileage of a passenger car. Just last week, I read an article in a magazine saying 60 MPH is optimal. These numbers are pretty close, so there's some validity in the statement. What's the physics explanation for this 55-60 MPH sweet spot?

Although this is an engineering question it's one that I've had great interest in the specific values myself. Wikipedia does an alright job with the question. 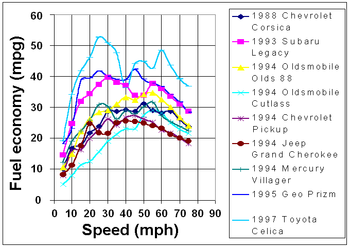 Looking a little bit deeper into it, this seems to be ripped from some Oak Ridge National Lab report, which as been taken down, but is still on the wayback machine. In fact, a lot of the Wikipedia article looks like a copy of this.

Funny, the report references a website that sounds like it has all the credibility in the world, fueleconomy.gov. They give the following image:

There are a couple of things to conclude with here. I am much more tempted to believe the first graph here. The reason is because cars have gears, because of that fact, I expect jumps in the fuel economy as a function of speed. In fact, a faithful technical report should really give different curves for each gear IMO. The second graph is probably smoothing things out from a larger collection of data to make it seem easy for the rest of us.

Either way, the claim that everyone driving 55 would be better for the environment seems to have technical merit behind it, even though we don't like the fact. One of the comments says they found sweet spots at a number of different speeds, going up to 90 something, this is almost certainly wrong. There may be hope for newer cars than what is represented here, however, and in particular some new designs with streamlined shapes may one day justify driving 80 mph to save gas. We can dream.

I was at a loss to explain very well where the efficiency losses at low speed comes from in an internal combustion engine (ICE), so I thought that an informative comparison would be to look at electric cars. It so happens that Tesla Motors made a post about their cars that would be HUGE utility to a physics class. Fuel use rate for an ICE must involve measurements of tiny flow or average data over a long trip, but electric cars have very accessible direct measurements of current available. Firstly, let's look at the energy per mile used - the analog to gas mileage. 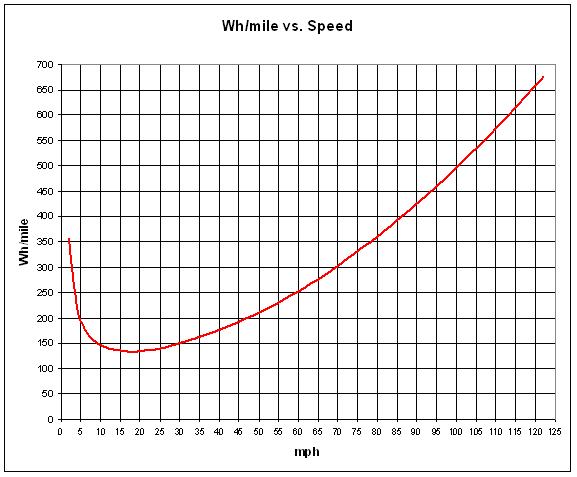 The most efficient speed for electric cars is closer to 15-20 mph versus 55 mph for ordinary cars. This is because the losses at low speeds for ordinary cars has to do with the construction and inefficiency of the gas ICE.

Directly to the question at hand - they also give the sources of losses over the range of speeds. This graph directly answers the question better than anything else I have seen. Of course, only for electric cars. 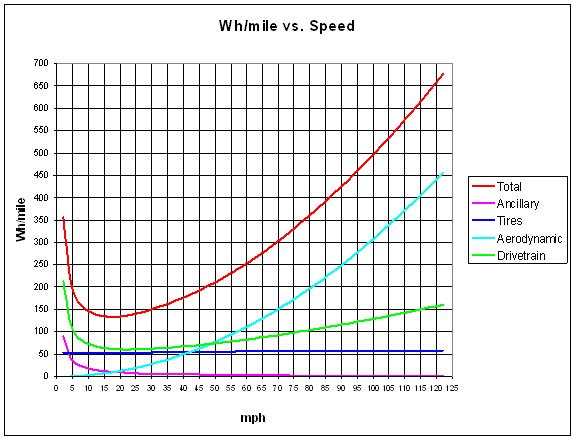 It's really an engineering question. Cars are designed for efficiency nowadays; especially in Europe the taxes are directly related to the MPG ratings on standardized test cycles. But even in the US, there are standard test cycles for fuel effiency. Those test cycles typically have large segments driven at ~55 mph.

Now an engineer that's optimizing for fuel efficiency has to make tradeoffs. Adding more gear ratios can improve engine efficiency, but increases costs. His marketing department really doesn't ask for efficiency at 75 mph; that buys them nothing. So there's generally little commercial need for a 6th gear to optimize fuel efficiency at those speeds (You do see 6th gears more commonly on German cars - no speed limit there)

There are two things to consider.

Obviously engineers target their designs to perform well during the EPA mandated duty cycles. To get the best miles per gallon you need a car with a small engine (low friction) that can operate near full throttle at low rpms, with very high gearing. On the other hand if you have a Corvette what you want to do accelerate full throttle to like 120mph and then coast down (no throttle) to 30 mph and then repeat the cycle.

Above the optimal speed, fuel consumption increases because air drag increases very quickly, so it takes more energy to "carve out" a tunnel through the air.

Below the optimal speed, the consumption increases because a car engine will burn fuel even when idle - there's some fuel spent just to keep the engine turning, and when you go slowly, this effect starts to become important.

I have a Zuma 125 4 stroke gas motor scooter, and performed a lot of fuel efficiency tests during the last month. It had 8.98 hp @ 7500 rpms, and uses a CVT automatic transmission. I tested it on a backroad, with many different speeds and conditions.
I drove 28.3 miles per test, starting with a full tank, and then measured how much fuel was used after the 28.3 mile trip. I have photos of the odometer and fuel use readings. In my tests, I rode 20 mph, 30 mph, 40 mph and 50 mph. I also did a 45 mph test (sorry, I know I should have tested it at 40 or 50 mph) while tucked down to reduce aerodynamic drag. I also added some homemade fairing aerodynamic work, and tested the mpg difference.

After analyzing the results, I realized that the mpg was declining linearly in relation to speed... And the gallons used per mile were increasing linearly proportional to the speed. If you are interested, please check the numbers... I was very interested and excited to see that the fuel consumption rate (gals/hr) was almost exactly proportional to speed squared, at any speed between 20 and 50 mph. I promise these tests were performed with pure scientific dedication, and are conclusive. No dumb errors were made :) . So as far as 4 stroke gasoline motor scooters with CVT transmissions go, I think the evidence is clear that the optimum speed is considerably less than 55 mph... The results show mpg consistently improving with reduced speed, even as low as 20 mph. But most interestingly, the mpg goes down linearly with speeds between 20 and 50 mph!

I understand the aerodynamics and rolling resistance very well, and have a general understanding of the mechanical systems... but I don't know why the mpg was inversely proportional to speed with a linear relationship. If anyone else has any idea why, please tell me. I know the aerodynamic drag increases with speed^2, and rolling resistance doesn't increase with speed at all... Why would mpg decrease linearly?

7
Simple friction formula for a car

1
How to calculate the effect of roof items on gas mileage?
7
Why does your car lurch toward an oncoming truck as it passes you?
14
Why, when one opens 1 car window, does that noise occur?
9
What is the optimal design for a paper airplane? (Or, at least, how can you approach it?)
4
What is the optimal weight for a golf ball?
3
Optimal axis of rotation of a baseball for lateral movement
1
Why car has sharp separation edges at the back?