Does this photograph portray double muon impact with nanogold atoms? 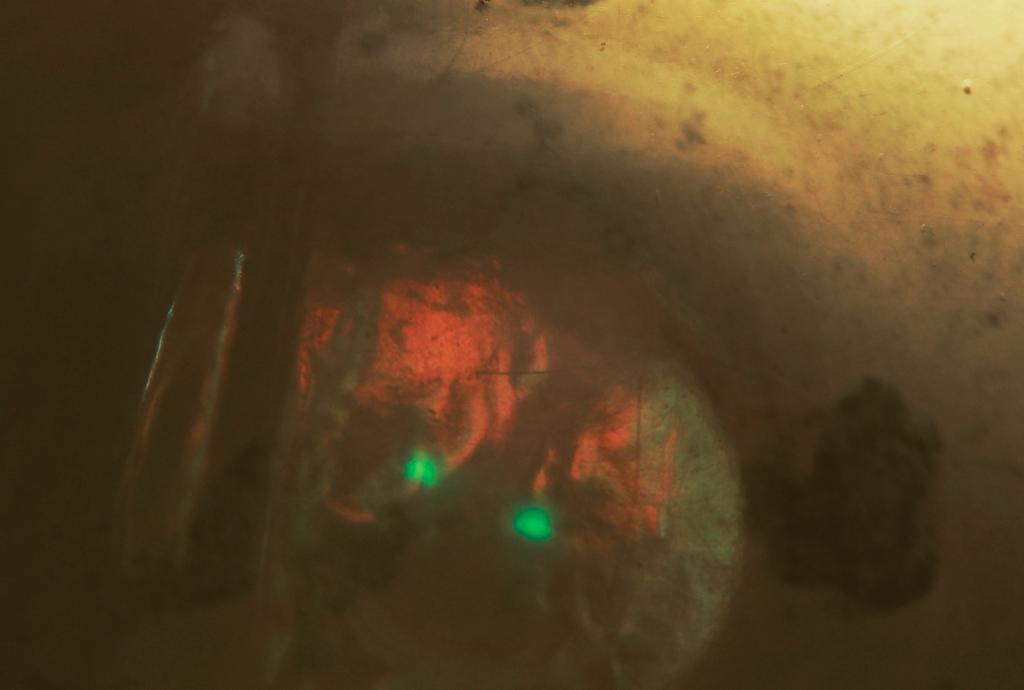 On June 10 I questioned if PHOTO 1 depicted an electron-positron particle annihilation caused by TEM generated electron impacts. My engineering instincts led me to think that the simultaneous red and green on the left and right hemispheres might be related to a positron (which Dirac likened to an electron moving back in time) was associated with what I thought to be a collision of particles that generated the separation of the two green areas that appear to be undergoing some type of explosive event.

I analogized the image in PHOTO 1 to the characteristics of the Roman era glass cup, the Lycurgus Cup which can be viewed in Wikipedia, reflects green and transmits red light depending on surface which the light photons initially strike.

Anna.v (10-June-14) kindly explained that the energy required to generate an annihilation (511 Kev) would not be present in a 200 KeV TEM and suggested that such energies could be found during collision with a random muon but an accelerator would be needed for verification of nuclear emulsion type material which recorded the event. Unfortunately, that would be the film from which PHOTO 1 was generated which is not readily available, so I began a search for other explanations beginning with the definition of muon, a lepton, one of the four elementary particles - it contains no quarks or sub particles.

The moons shadow from cosmic rays is depicted in Wikipedia under the definition of muon and the greens associated with the rays appear consistent with the greens in PHOTO 1.

However, in the original image of PHOTO 1, the green areas appear to engulf dozens of smaller particles and in the thousands of photographs taken of these TEMS, some type of interference pattern projects from "particle emissions" generated by what I suspect to be electron impacts with nanogold atoms used to dark stain the targeted biological. No others throw off this distinctive green coloration.

The imaging of PHOTO 1 probably inversely projects the green from the bottom to the top based on the angle of the light to the camera and the composition of the photographic gel paper (PHOTO 5).

Now I question if PHOTO 1 may be the image of a double muon impact, separated by the nanometer sized leg of the biological triangle. (PHOTO 2) If so, the deceleration of the muon would produce Bremsstrahlung radiation and decay into anti-particles. In this respect note the black streaks in PHOTO 1 which intersect at about 90 degrees above the two green areas which also align at approximately 90 degrees. 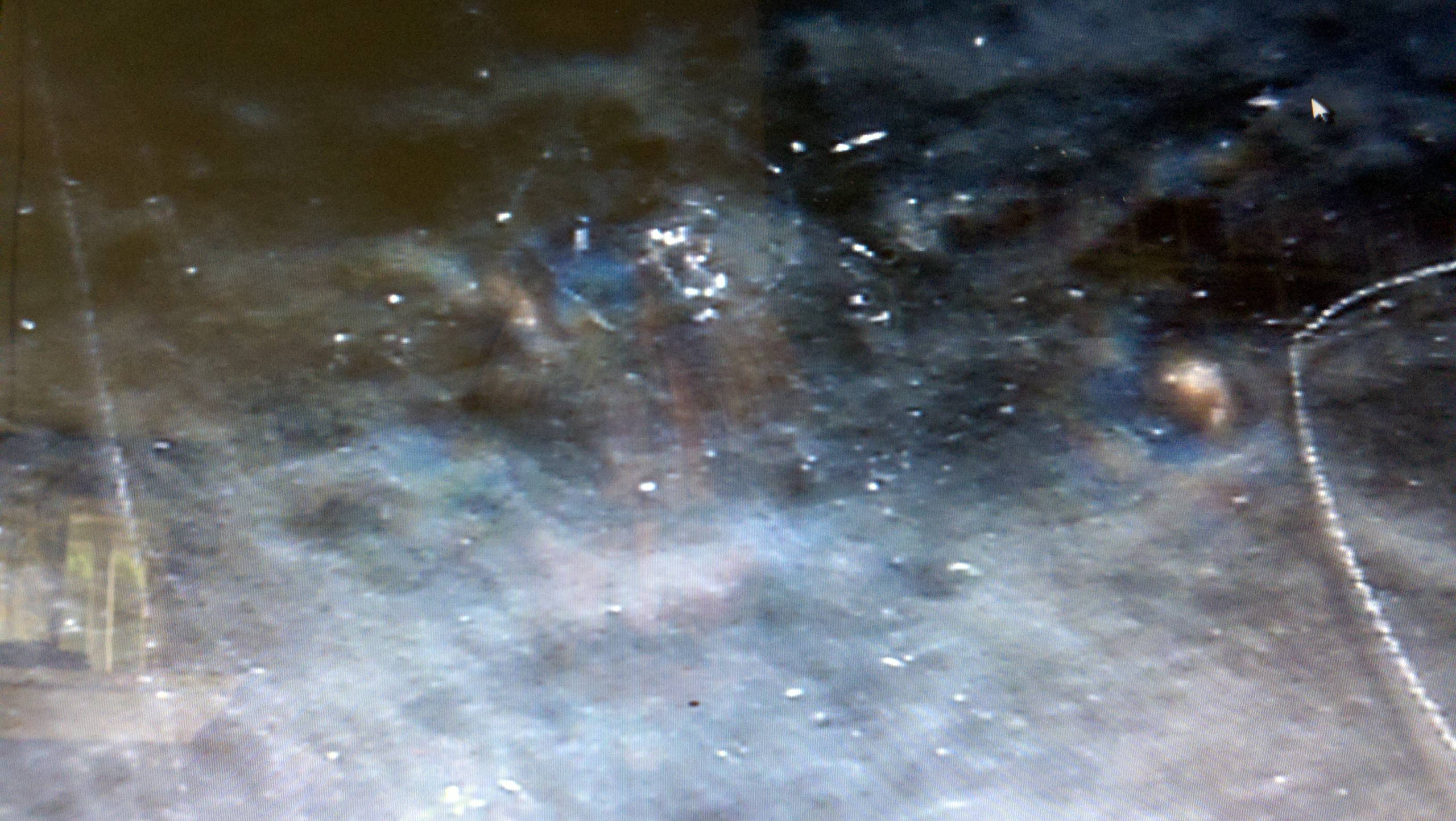 PHOTO 3: Screen photograph of enlarged areas of impact. Above the bottom vertices of the triangle and left of the right leg a circular particle emission spirals upwards possibly imaging expanding electron bands that have been pushed out from the impact area center. (Assuming the Rutherford orbital model is correct). Almost horizontally to the right of spiral and right leg another gold region appears to have been impacted.

Could Bremsstrahlung radiation from the decelerations of the muons provided the shorter wavelengths needed to image an EM wave? In point is the picometer size waveform that transits from the lower vertices towards then away from two areas of impact on the right side of the right leg of the triangle in PHOTO 2. Might this be an errant displaced electron seeking a new home - it appears to traverse towards two spots of glowing gold that repel it - an indication of reversal of ionic attraction. 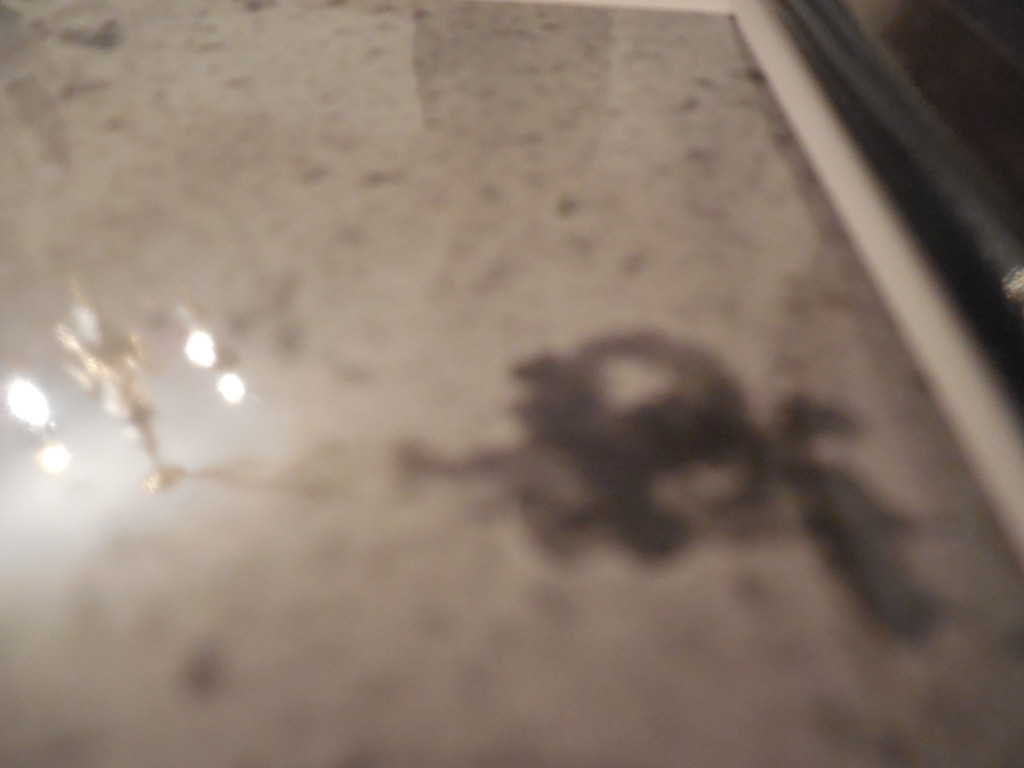 PHOTO 5: PHOTO GEL COMPOSIITON: Photographic paper is comprised of four layer, a paper base coated with a layer of baryta/gel and photo gel, then about .5 MIL (12,500 nm) AgX (silver halide) and topped with a gloss coat which serves as somewhat of a projection screen with ellipsometric photography. This image portrays the reflection and "depth" and inverts the gold, possibly a reflection of gold dopant in the gel, from bottom to top.

Some insight into this inquiry can be gleaned from the following project posted on the web.

“Measurement of the Lifetime of Muons and Pions”

For Z = 40 [Au=79] the Bohr orbit is already inside the nucleus. The capture probability for this condition is very close to 1.”

Coherent suggestions, input and answers would certainly be appreciated.

Thank you for considering these issues.

In your previous question, you say that these two images 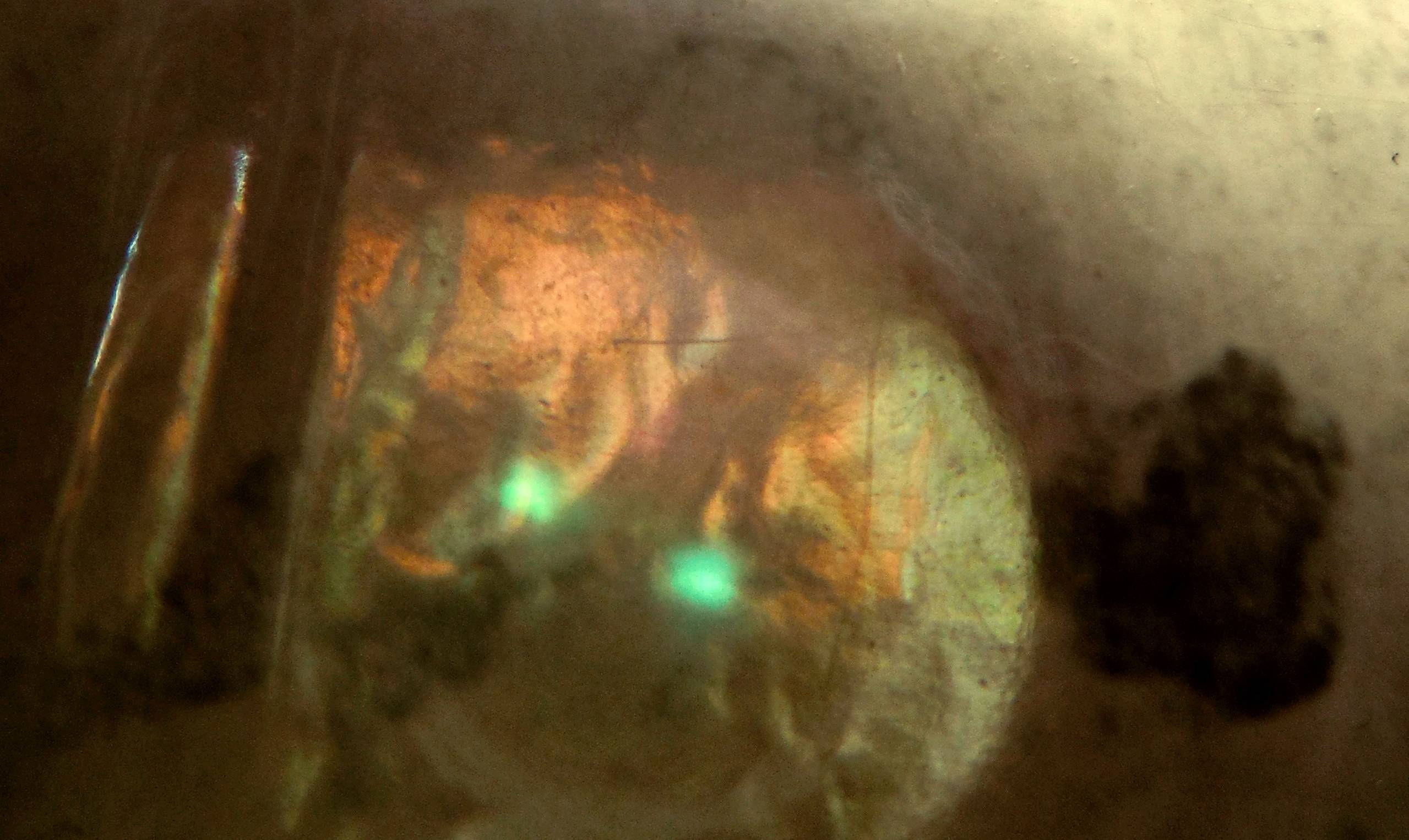 have been taken of the same area of your sample but with a different lens and lighting configuration. I think that I believe this: in this first image, there are two dark areas (the left shaped sort of like New York State, and the right shaped sort of like a heart), and in the second image both dark areas are still visible. Your PHOTO 1 from this question

It's important to remember that particle collisions, as photographed in bubble chambers, are transient events. If you have a phenomenon that lingers long enough for you to focus a camera on, it's not a particle collision. While a particle collision in a transparent material can create a crystalline defect that acts as a color center, those typically scatter or absorb light. Light-emitting processes during fast particle transport, such as scintillation, end when the fast particles are removed.

By contrast, lighting artifacts and flash reflections are often stable from photograph to photograph and lie along circular arcs.

I observe that in your final image,

the most recognizable feature is the reflection of your dining-room chandelier on the left. That sets the size scale for your other images. I suspect that in your photo 3,

all of your light-colored line-like features, including the circle/spiral near the top center, are carpet fibers fallen on your surface from the air.

You might enjoy reading a book on how particle detectors work.

Not the answer you're looking for? Browse other questions tagged quantum-mechanics quantum-field-theory particle-physics optics or ask your own question.

1
Do these photographs depict the Higgs Field?