I have recently read an article about gravitation slingshot assist used by Voyagers 1-2, and was thinking on why this hasn't been used for travel between solar and other systems.
I mean sligshot can be done as many times as it is necessary to get speed of lets say half the speed of light that would allow to travel to Alpha Centauri in ~10-20 years can it not? There must be a flaw in my thinking that 3 or 4 planets can be re-used to get to necessary speed otherwise it would already have been done (drawing below). Even if planets would align differently I should always be able 'find' the planet that would allow me to jump to one that is closer to the sun, and repeat the acceleration again and again. 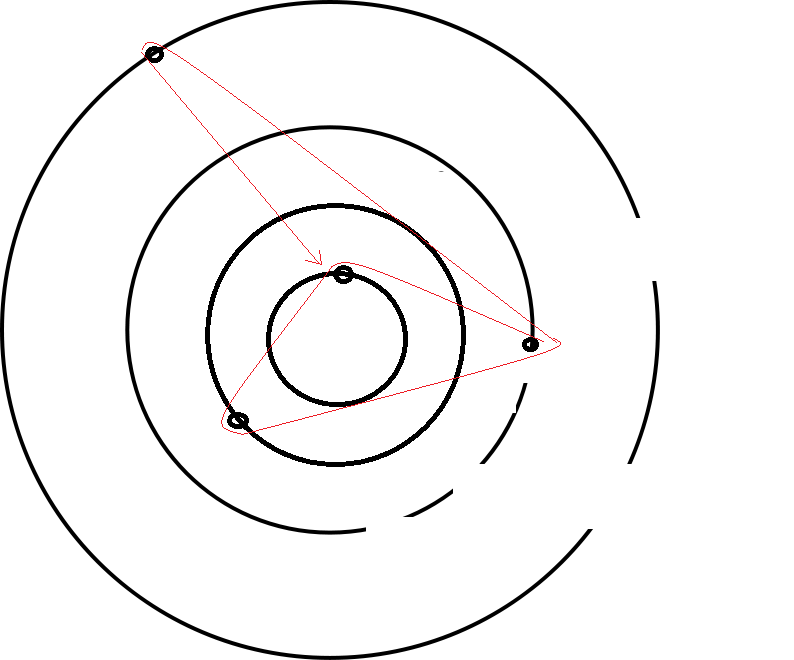 One can get an order of magnitude estimate of the maximum speed attainable by gravitational slingshots without doing any real calculation.

The gravitational field of the planets used for slingshots needs to be strong enough to "grab" the speeding spaceship. As a planet cannot "grab" a spaceships moving faster than the planet's escape velocity, it is impossible to slingshot a spaceship to speeds beyond the planetary escape velocities.

(Note: by working with well-defined trajectories one can refine the above argument and get all the numerical factors correct.)

The faster you go, the less velocity you theoretically can gain from a gravity assist.

The reason for this is that the faster you go the harder it is to bend the orbit. To proof this we have to use the patched conics approximation, which means that while within a sphere Kepler orbits can be used. The sphere can be simplified to be infinitely big, since the bending of the actual patched conic will hardly be affected by this. While the eccentricity is low (equal or greater than one, since it will have to be an escape trajectory) the trajectory will be able to be bend 360° effectively reversing the relative velocity of the space craft with the celestial body, so the change in velocity would be twice that relative velocity, which is also the theoretical maximum gain. When the eccentricity increases this angle decreases. This angle can be derived from the following equation:

When the eccentricity gets really high this angle will become 180°, which means that the trajectory is basically a straight line.

There multiple ways to alter the eccentricity. In this case the relevant variables would be:

Using a little bit more maths it can be shown what the change in velocity would be after such a close gravity assist. For this I use a coordinate system with a unit vector parallel to the direction of the relative encounter velocity, $\vec{e}_{\parallel}$, and a perpendicular unit vector, $\vec{e}_{\perp}$:

If you want an as high as possible velocity, then you want that this change in velocity would be in the direction of your velocity around the sun. If you have enough time and the orbit is eccentric enough that it crosses multiple orbits of celestial bodies then there are a lot of possibilities, but as soon as you have an escape trajectory from the sun you basically pass by each celestial body at most one more time.

If you just want to get an high as possible velocity you might want to get closer to the sun in an highly eccentric orbit, since its "surface" escape velocity is $617.7 \frac{km}{s}$.

You are all thinking too hard about this. The slingshot effect is all about frame of reference. Relative to the body you are approaching, the entrance velocity increase must equal exit velocity decrease or you violate simple laws of physics (i.e. gravitation). From the solar system perspective you will have a net gain in velocity if you approach a planet from the right direction, else you will have a net speed decrease after exiting. The theoretical maximum velocity increase on exit is therefore a function of the speed of the host (slingshot) body in the frame of reference and the vector of approach.

1
Can we use the planets and Sun to fling out a craft at relativistic speeds?