Why don't the black holes appear black in color in images of galaxies taken from HST?

a black hole is anything but empty space. Rather, it is a great amount of matter packed into a very small area

According to the documentary Space Unraveling The Cosmos about Black Holes

Gravity here is so strong even light cannot escape

Which leads me to believe that Black Holes basically are masses so compact but great which gives them very strong gravitational influence (Newton's Gravitational Law) that light is not allowed to go out of, hence a "Black" hole.

If my above understanding of Black Holes is correct, then why is those Spiral Galaxies pictured using Hubble Telescope is showing a big shiny ball instead of a "Black" hole ? What is the obvious clue that I am missing here ? 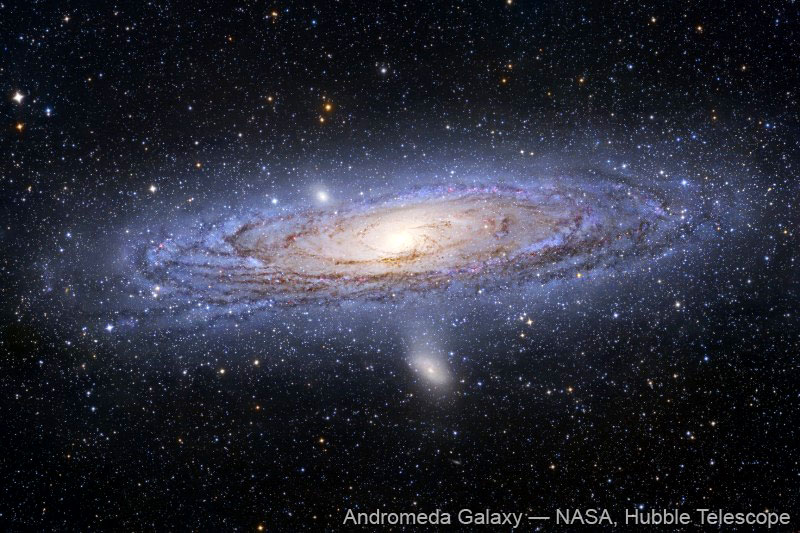 A supermassive black hole hosted in such a galaxy has a mass of something like $10^6-10^9\;\rm M_\odot$ (solar mass, $1\;\rm M_\odot \approx 2\times10^{30}\; kg$). The monstrous billion solar mass black holes are really only found in particularly large ellipticals; the galaxy in your photo probably hosts one of about one to a few million solar masses. The horizon radius of such a black hole will be on the order of the Schwarzschild radius, so:

So the supermassive black hole is something like 100 billion times smaller in radius than the galaxy, way way WAY smaller than a pixel in a picture like the one you show.

Furthermore, there are a lot of stars in the central region of a galaxy and many will be close (or roughly in front of) the black hole, not to mention clouds of intragalactic gas that may obscure the view to the black hole.

That said, it is becoming possible using very long baseline interferometry to take "pictures" of a couple of nearby black holes. I don't think there are any successful images yet, but we'll probably get some in the next 3 years or so using the Event Horizon Telescope. A prediction of what will be seen: 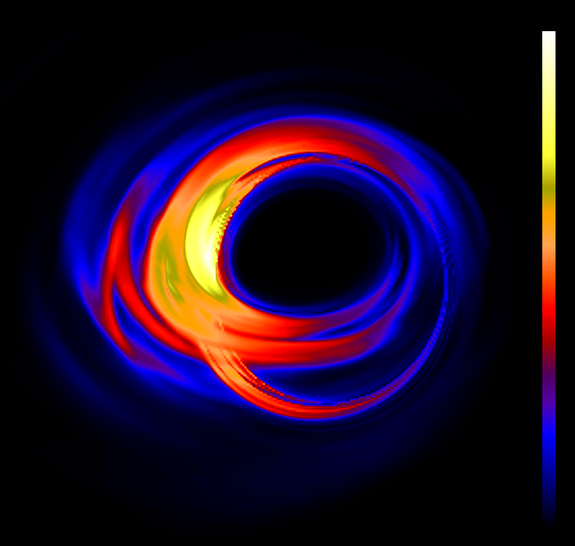 The formation of the image is quite complicated (the paper I link later gives a lot of the gory detail if you're interested). First, note that this is in "false colour", the colour indicates the intensity of the radiation from blue (low) to white (high). The photons come from a disk hot gas ("accretion disk") that is expected to be found near many black holes. Those in the picture are those which happen to approach the black hole, but do not enter it. Because of the curvature of spacetime, photons can orbit the hole and accumulate in these "photon orbits". The orbits occur a few Schwarzschild radii from the hole. The orbits aren't stable, so some photons eventually plunge into the hole, while others escape away - these are the ones in the picture. The strong asymmetry in the image (while you'd expect a BH to be very symmetric) is due to the fact that the source of the light (the accretion disk) is not spherically symmetric, and only approximately axially symmetric - it may be warped, have bright and dim spots, etc. One side of the image is brighter because typically one side will be relativistically beamed toward us while the other will be beamed away. This is as close to a black hole "looking black" as we're likely to get. There are photons orbiting across the "face" of the hole in the picture, but none make it to us from that direction, so the hole appears black in the image.

One paper I particularly enjoyed reading about the more theoretical aspects of these black hole images: Testing the no-hair theorem with event horizon telescope observations of Sagittarius A*. It includes more simulated images at resolutions more like what we'll realistically achieve with the EHT.

96
How can a black hole produce sound?
0
Can one model a spiral galaxy with a similar manifold to one for a whirlpool?
1
Could black holes be driving the expanding universe (dark energy)?
12
The final parsec "problem"
2
Pulling apart a Black Hole
7
Do gravitational waves impart linear momentum to objects? (e.g. Quasar 3C 186)