Can an elliptical orbit take the same time as a circular obit?

In the picture below you can see two orbits of potential pbjects. The main aspect of the orbits is that they have a collision point at the maximum of the elliptical orbit. My question is, could the object travelling elliptical orbit take the same amount of time as the object taking the circular orbit?

The reason behind this question is that I am doing an analysis on the movie called Gravity. The only information provided in the movie is that the debris cloud will collide every 90 minutes (with the Hubble telescope) and that it is going at 50000 miles per hour (which is much faster that the Hubble telescope). Obviously, since they are going at different speeds, they have to be in different orbits. So this is the only possibility I have come up with where they could possibly collide every 90 minutes, or that the orbit time of the elliptical orbit would take 45 minutes, or 22.5 minutes (any factor of 90). 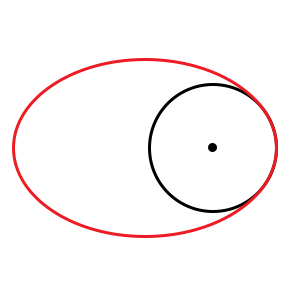 The period of an elliptical orbit is given by:

According to this article the collision every 90 minutes is one of the things the film got wrong. This could only happen if the cloud of debris were stationary, in which case it would simply fall towards the Earth.

Not the answer you're looking for? Browse other questions tagged homework-and-exercises newtonian-mechanics orbital-motion space or ask your own question.

9
What exactly is the microgravity field in orbit?
3
Can the axis of rotation of a celestial body point in any arbitrary direction?
5
Are elliptical orbits really elliptical?
3
How can you calculate the tidal gradient for an orbit?
16
Why are these periods the same: a low earth orbit and oscillations through the center of the earth?
0
Orbital speed for an inclined circular orbit round a spinning spherical planet