Is static friction an impulsive force?

For example: let's consider a static sphere on an horizontal rough surface. I apply an impulse $J$ parallel to the ground and in the middle of the sphere. If, like my book says, the friction is not an impulsive force, then I can use $J=\Delta p=mv_{CM}-0$, so $v_{cm}(0)=J/m$. But this is counterintuitive, because if I apply a small impulse ,for instance $J=1 Ns$, to a sphere of $m=10^{10} Kg$, the static friction force ($F=\mu_{s}mg$) is surely enough to keep the sphere static. 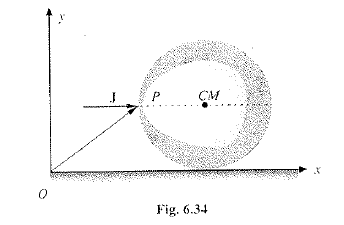 You can repeat the reasoning without a sphere: an impulse $J_{x}=1 Ns $ on a point mass of $m=10^{10} Kg$ on a rough surface. If friction is not impulsive, then you move the object (of course, only for a very short time, because you have a dynamic friction that slow the motion) no matter what the mass is.

EDIT: The definition given in my book is: "very intense forces that act on a short time, compared to the observation time".

Simple example of impulsive force of friction: a marble hitting a hard surface at an oblique angle. During the (short) impact (which most would agree is an impulse) the normal force will be very large - and a component of friction will appear along the surface. When the marble is no longer in contact with the surface it will be rotating - showing that a torque impulse ($F_f r\delta t$) must have been applied.

So yes - it can be an impulsive force when $F_f \delta t$ remains constant in magnitude as the interval gets shorter. But in your example the normal force (on which magnitude of friction depends) does not change with duration of impulse so the product vanishes as $\delta t$ goes to zero: in that case instantaneous friction does not contribute significantly to the motion immediately after the impulse.

I found a couple definitions of impulsive force, one of which states

The force that two colliding bodies exert on one another acts only for a short time, giving a brief but strong push. This force is called an impulsive force.

Frictional forces don't typically satisfy the criterion of strong in magnitude. Or at least the magnitude of $F\Delta t$ is small compared to the actual collision-based (car-on-car) impulses present.

The following picture is from an impact hammer hitting a piston which is connected to a captive LVDT. The impact hammer outputs a signal of ~$1.0~\text{mv/lbf}$ (~$9~\text{lbf}$ avg) and acts over a period of time ($\sim \ 4$ ms). This impulse illicits a response in the piston which causes it to deflect, as seen on the teal-ish curve. The LVDT ouputs a signal of $15~\text{mm}$/V(absolute deflection from state 1 to state two is ~$15~\text{mm}$ in ~$23~\text{ms}$).

By looking at the LVDT curve, and seeing that the curvature of that line over which it is changing is parabolic of the 2nd order [I have the csv for this and can confirm that it is 2nd order parabolic], and by noting that the position with respect to time (neglecting initial conditions) can be simplified to $(\frac{1}{2})at^2$, it is obvious that the dynamic friction of the o-rings on the piston are implying a constant force over a period of time to slow and stop the piston.

This constant force over a period of time by the o-rings is directly an impulse.

By using a coulomb-friction impulse balance of J=J, average dynamic friction can be found. 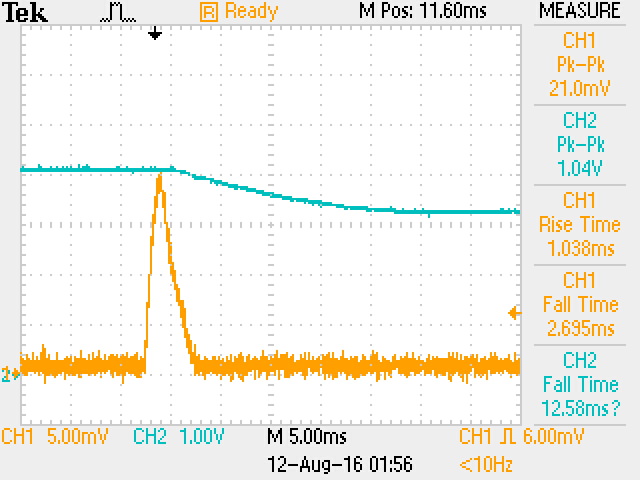 0
Work done by a frictional force on a cylinder