"Lack of inversion symmetry" in crystal?

Apparently (first paragraph of this article) the lack of inversion symmetry is some crystals allows all sort of nonlinear optic phenomena.

Now. Does anyone know of an intuitive or just physical explanation as to why this is the case?

What does inversion symmetry mean and what is so special about it?

The presence or absence of inversion symmetry in a medium has a direct impact on the types of nonlinear interactions that it can support; specifically,

media which do have inversion symmetry cannot support nonlinear effects of even order.

The reason for this is that adding an even harmonic to the fundamental will yield an asymmetric dependence of the electric field, and this is only possible if the medium itself is asymmetric.

Unfortunately, the double-negative formulation of the symmetry result makes you do a bunch of mental gymnastics, so it is normally phrased in its contrapositive form,

the lack of inversion symmetry permits a medium to support nonlinear effects of even order,

so long as there are no other external factors that also impede those effects. In terms of the result that you get from symmetry considerations this is the more convoluted statement, but it is more useful practically so that's the way people usually phrase it.

"Inversion symmetry" is the property that the material remain the same when you change the position $\mathbf r_j$ of each particle $j$ to its 'inverse', $-\mathbf r_j$. Because we can typically move materials around, this is equivalent to saying that the medium is identical to its mirror image. This is true, for example, for a gas (if the $\mathbf r_j$ are random, then the $-\mathbf r_j$ will also be random), or for crystals like body-centred cubic lattices: 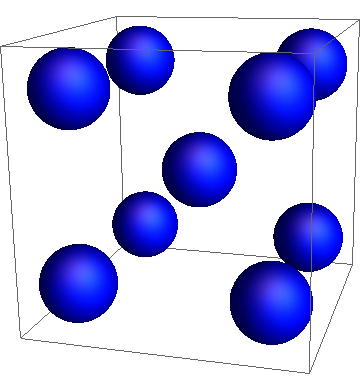 On the other hand, certain lattices do not have this symmetry, like you get when you displace the atom in the centre towards one of the faces of the cubic unit cell: 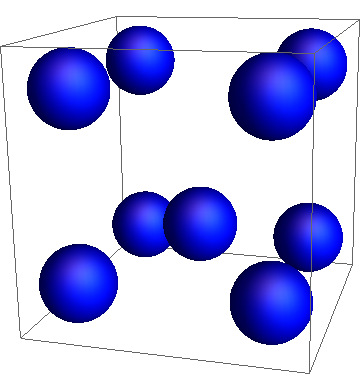 Here the symmetry is broken, and if you invert all the coordinates with respect to (say) the middle atom, you no longer recover the original lattice.

It is fairly easy to see why this asymmetry is necessary for second-harmonic generation. Suppose that the second harmonic has a maximum in the $+z$ direction at the same time as the fundamental, so that they add constructively. If you wait for half a period of the fundamental, its electric field will be in the $-z$ direction, but the second harmonic will have undergone a full period and will be pointing towards $+z$, so that the two interfere destructively. 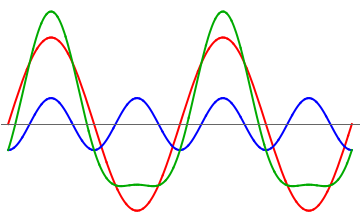 This means that the maximum of the total field is stronger in the $+z$ direction than it is in the $-z$ direction. This is actually quite remarkable! In particular, the medium itself needs to be asymmetric to "know" which direction the stronger fields need to go towards. If the medium has inversion symmetry, then the $+z$ and $-z$ directions are equivalent, and an asymmetric output like this is impossible. 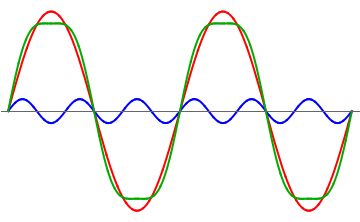 In fact, this selection rule - the forbiddenness of even harmonics in inversion-symmetric media - goes all the way up the harmonic scale, including phenomena where the field is strong enough to break out of the perturbative treatment in David's answer. The nicest example is high-harmonic generation, which you get in gas jets when the driving laser is intense enough that the laser's electric field roughly equals the internal electric fields of the atom. In that case, you get a reasonable response at very high harmonic orders (the record is around 5000 (doi)), and you get a very flat plateau in which the response doesn't really drop with the harmonic order: 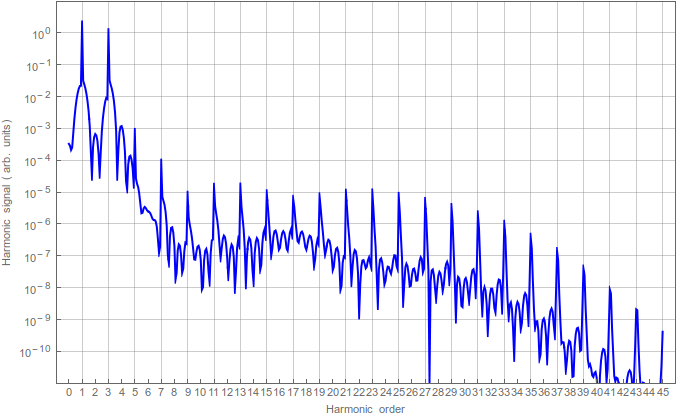 Note, in particular, that all the even harmonics are missing. In here I am plotting the response of a single, symmetrical atom, which means that even orders cannot appear. For inversion-symmetric media, then, this relation holds all the way up the even-integers scale.

In nonlinear optics, the typical approach seems to be: take the relation between the polarization and electric field $P=\epsilon_0 \chi E$ and start adding correctional terms based on the Taylor series.

This particular phenomena, second harmonic generation, can only occur from the even terms in the series. Spacial inversion occurs from making the replacement $\textbf{r} \rightarrow -\textbf{r}$, which implies $P\rightarrow-P$ and $E\rightarrow -E$ (since they're vectors). If spacial inversion is symmetric (aka the relation between $P$ and $E$ is unchanged after inversion), then this implies the even terms must be 0, $\chi^{(even)}=0$.

To my understanding, there isn't a deep meaning about it. Inversion symmetry is just a jargon way of saying the even terms are 0. Edit: Reading the other answers, there is some meaning behind it. The inversion symmetry is based on whether the crystal structure is symmetric under inversion.

Source: Non-linear optics isn't really my area. I found the answer on page 21 of the book Extreme Nonlinear Optics: An Introduction, on Google Books.

I made this little animation for wikipedia a few months ago, partly to clarify this very issue...

Since you're asking about second-harmonic generation, let's focus on the green arrow.

In an inversion-symmetric crystal, there are two possibilities for each electron.

(A) Many of the electrons are in an inversion-symmetric local environment. So imagine that the black curve for this electron is symmetric, the same on the left vs the right, rather than lopsided like the one I drew here. If you think about it, there cannot be a green arrow in that case. Try to visualize why. The green arrow is guaranteed to cause lopsided, asymmetric motion.

By the way, the same argument applies to optical rectification (the red arrows). It doesn't happen in an inversion-symmetric crystal. And same for fourth-harmonic generation, sixth-harmonic, etc.

If the medium has inversion symmetry, then the response of the medium is the same regardless of orientation. The degree of polarization in the "positive" direction is the same as the "negative". The polarization response crosses zero symmetrically, right in the middle of the excursion. The excursions of the polarization are the same in the positive and negative directions. The Fourier components of the disturbance can have only odd-order contributions. The lowest order harmonic generation in such systems is third harmonic generation.

A picture is worth a thousand words here. Here's one from Wikipedia, but I have to admit it's not easy to understand. There is a great picture somewhere ... I've re-drawn it myself many times. If I find a link to it I'll update the answer.

Look here It's an improvement, but there is a better one out there somewhere. The thing to note in this article is that the asymmetric response is the sum of the second harmonic, fundamental, and DC components.

Not the answer you're looking for? Browse other questions tagged optics symmetry fourier-transform crystals non-linear-optics or ask your own question.

3
Internal and spacetime symmetries?
16
What does the statement "the laws of physics are invariant" mean?
5
If photon-photon interactions are impossible, how are higher harmonics generated?
27
Understanding time crystals
1
What are crystals used for in radio?
4
Inversion symmetry restrictions to the Berry curvature in 2D
2
What is the relationship between directions in reciprocal and real space of a photonic crystal?
0
$O(N)$ symmetry in three dimensions