I understand that, for example, a thick enough sheet of lead can absorb gamma radiation, but I want to understand what actually happens at the molecular/atomic/subatomic level. Also, can the same logic be applied to cosmic particles? I have tried Googling for an answer, but to no avail. Can someone enlighten me?

Radiation can be several things, but since you specifically mentioned lead shielding, let's look at X-rays - a lot of what you learn applies to other radiation as well.

To stop radiation it needs to interact with "something" that makes it give up its energy and momentum. This is how you get the radiation to stop going in the direction it was going.

Now X-rays typically interact with matter (atoms) in one of three ways:

At low energies you can have the photoelectric effect: the energy of the radiation is completely absorbed by the electrons of the atom - so the photon "disappears" and the electron gets all the energy (minus whatever energy was needed to get it detached from the atom - the bonding energy). Electrons don't travel very far in matter, so the energy is usually absorbed once a photoelectric interaction occurs. The probability of this interaction depends on the energy of the photon and the $Z$ (atomic number) of the atom - higher $Z$ means much higher probability (I have seen $Z^4$ relationships but I'm not sure how well those hold, and over what range.)

Where $m_0$ is the rest mass of the electron and $\theta$ is the angle between the incident photon with energy $E$ and final energy $E'$.

The more electrons there are in your material, the more effective the stopping power in this range (above 80 keV or so). This is why lead, depleted uranium, bismuth, tungsten, and other such materials are good for shielding.

At very high energies, you can get pair production: the photon (with more than 1.022 MeV energy) creates an electron/positron pair "out of thin air", giving up 1.022 MeV of energy (which is turned into mass of the particles created).

So to recap: X-rays shielding works by interaction of electrons with photons. Higher density materials improve the probability of Compton scatter; higher atomic number increase photoelectric interaction cross section. Typically, one talks about the half value thickness: the thickness of material that stops half the radiation. Because shielding is a probabilistic process, there is no such thing as "perfect shielding".

One more point about density of the shielding material:
In some situations, you care about stopping the radiation in the shortest possible distance. This happens for example in a radiation pinhole camera (used in SPECT systems), where you want to have a small opening to let radiation through, but need to stop all radiation outside of that. Such an aperture has to be made of the densest high-Z material you can find. People usually choose gold for this application (http://ieeexplore.ieee.org/xpl/articleDetails.jsp?arnumber=949378) - the figure of merit here is the product of density and specific scatter cross section, the linear attenuation coefficient with units of $m^{-1}$. The larger this number, the more efficient the material is at stopping radiation in a short distance. A couple of examples (all values at 100 keV, attenuation data from http://physics.nist.gov/cgi-bin/Xcom/xcom2-t):

As you can see, for this particular example the shortest stopping length is obtained for iridium - because although it has a slightly lower Z than gold, it has significantly higher density.

When you are interested in "bulk radiation protection", for example in nuclear reactors, then the question is simply "how do I get a lot of shielding for not a lot of money". Now the size of the shield does not matter very much, and you end up with water - a very cheap and abundant material which is capable of stopping radiation (not just gamma rays, but neutrons as well). This is the material of choice for shielding (spent) reactor fuel. You may have seen the pictures of the blue-glowing fuel rods under water: 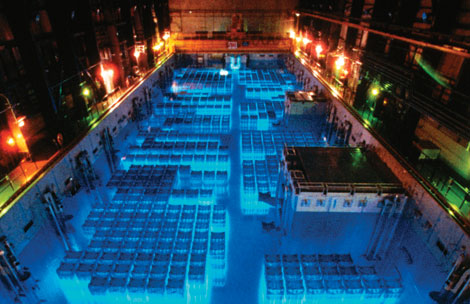 source of this image: http://spectrum.ieee.org/image/37182

My point is - as long as you put "lots of electrons in the way" you will eventually stop gamma rays: if you need to stop them in a short distance, you need dense high-Z material, but that is not always necessary.

In radiation protection, it is recognized that the combination of shielding, distance, and time to exposure all play a role in keeping radiation dose to people as low as possible: ALARA "As Low As Reasonably Achievable".

Galactic Cosmic Rays often are moving at close to light speed. When a such a high speed nuclei or proton strikes a massive nuclei (such as a lead nucleus), it is like a cue ball breaking a rack on a pool table. You have particles going every which way forming secondary cosmic rays. To avoid this shower of secondary particles, atoms with small nuclei are desirable. So hydrogen rich compounds may be better shielding against GCRs. Water is often suggested as shield against GCRs.

The two existing answers have noted that EM radiation (X-rays, gamma) is effectively stopped by electrons. There are at least 4 other types common types of radiation:

The first thee are commonly generated by nuclear decay reactions; the 4th category is relevant as it's part of the cosmic particles mentioned. Shielding for them differs. Alpha's are quite easy to stop, as are ions. Pretty much any thin layer of matter will stop them - a centimeter of air will have already have a measurable effect.

Beta's are electrons and are therefore easily stopped by many materials. Because they're lighter than alpha's, yet have similar energies, they travel faster. As a result, they penetrate further than alpha's.

Neutrons are the odd one out, as they're electrically neutral. No electron cloud is going to stop them; they're stopped by nuclei. But it doesn't take a particularly heavy nucleus for that. Light elements have less electron orbitals and can therefore pack more nuclei in a given volume, which compensates for the fact that each nucleus is smaller.

Not the answer you're looking for? Browse other questions tagged radiation absorption or ask your own question.

5
How does radiation degrade mechanical parts and electronic devices?

3
How to calculate gamma radiation shielding?
1
How does "contamination" through (radioactive) radiation work?
5
How does radiation degrade mechanical parts and electronic devices?
1
How do we identify distant radiation sources?
4
Times associated with absorption and emission processes
0
Hybrid torus as an active space radiation shielding
12
Fundamentally, why do some nuclei emit ionizing radiation?
2
Is the Timing of Alpha Particle Radiation Perfectly Random?
5
Can a single piece of paper really block all non-electromagnetic ionizing radiation?