While playing racquetball, I frequently hear a very prominent "boing" sound (or more formally, a chirp). For example, you can hear it in this video when the ball hits the front wall.

Does anyone know what the origin of this sound is, and why the pitch rises?

Here is the spectrogram from the above video: 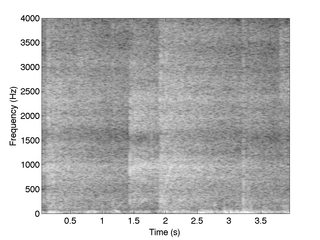 A careful examination shows that there are at least four linear chirps, which I've highlighted below. If you really listen carefully, all four of these are audible. (However I can only distinguish between the two high frequency chirps when the audio is played at half speed.) 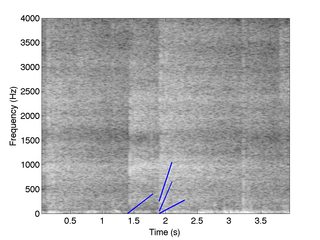 After much investigation, simulation and a deep literature search, I've figured out the true answer.

You perceive a chirp because you are being hit with the echos of the sharp noise that generated the sound. The times between the arrival of those echos is decreasing inversely with time, so it sounds as if it were a tone with a fundamental frequency increasing linearly in time, hence the chirp.

To get a feel for the phenomenon, consider a simulation:

Above you see a slowed down version of the simulated pressure wave inside a 2D racquetball court. I threw up the generated sound on soundcloud.

If you watch the simulation, pick a particular point and watch the reflected sounds go by, you'll notice the different instances of the multiple echos arrive faster and faster as time goes on.

You can clearly hear the chirps in the generated sound, and if you listen closely you can hear secondary chirps as well. These are also visible in the spectrogram: 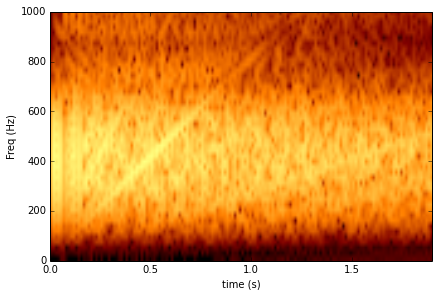 In particular, they explain not only the main sweep, but the appearance of the secondary sweeps using some number theory. Worth reading in full. This suggests that for the best sweep one should both stand and listen in the center of the room, though they should be generic at any location.

Following the paper, we can give a simple geometric argument. If you imagine standing in the middle of a standard racquetball court, which is twice as long as it is tall or wide, and clap, your clap will start propagating and reflecting off the walls. A simple way to study the arrival times is with the method of images, so you imagine other claps generated by reflecting your clap across the walls, and then reflections of those claps and so on. This will generate a whole set of "image" claps, located at positions $$ ( m, l, 2k) L $$ where $m,l,k$ are integers and $L$ is 20 feet for a racquetball court, the time for any particular clap to reach you is $t = d/c$ and so we have $$ t = \sqrt{m^2 + l^2 + 4k^2} \frac{L}{c} $$ for our arrival times. If we look at how these distribute in time:

It becomes clear why we perceive a chirp. The various sets of missing bars, which themselves are spaced like a chirp, give rise to our perceived subchirps.

Details of the 2D Simulation

For the simulation, I numerically solved the wave equation: $$ \frac{\partial^2 p}{dt^2} = c^2 \nabla^2 p $$ and used impedance boundary conditions on the walls $$ \nabla p \cdot \hat n = -c \eta \frac{\partial p}{\partial t} $$ I used a collocation method spatially, with a Chebyshev basis of order 64 in the short axis and 128 on the long axis. and used RK4 for the time integration.

I modeled the room as 20 feet by 40 feet and started it of with a gaussian pressure pulse in one corner of the room. I listened near the back wall towards the top corner.

I put up an ipython notebook of my code, with the embedded audio and video. I recommend playing with it yourself. On my desktop it takes about minute to do a full simulation of the sound.

I've updated the code to generate sound at multiple locations, and generate their sounds. I can't seem to embed audio on stackexchange, but if you click through to the IPython notebook view, you can listen to all of the generated sounds. But what I can do here is show the spectrograms: 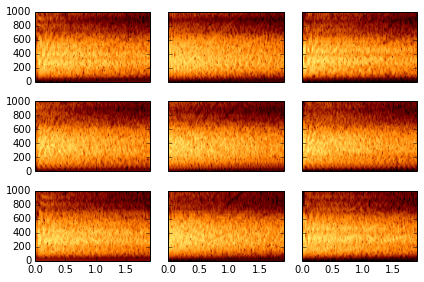 These are laid out in roughly their locations inside of the room. Here the noise was generated in the lower left, but the chirps should be generic for any listening and generation location.

The explanation of alemi is correct. I noticed this in 2006 and had a first-year do a study of it: http://www.math.dartmouth.edu/~ahb/notes/Paopao2007poster.pdf (the spectrograms are not good in that poster). Here's a spectrogram we recorded from a hand-clap in the standard 20'x20'x40' court showing two clear slopes: We also found foot-stamping as a good impulsive excitation, since it contains more low frequencies.

The only reference I knew was the 1-page note "Racquetball court whistlers" by Simpson and Ryan, Am J Phys 59 (2) (1991) 175-176, using a density of states argument which correctly predicts linear frequency growth with time in 2D, but incorrectly predicts quadratic growth in 3D. I did not know about the Kiyohara et al 2002 article, so, thanks for that. It saves us having to publish the basic explanation! (it was a cute side project that never got written up)

However, Kiyohara et al misses a lot of the story; there are more details explaining the absence and presence of the various slopes coming from number theory (specifically the Hardy-Littlewood circle method) that I still intend to write up...

Anyway, great to see all your simulations. It's a beautiful phenomenon!

I've noticed that (A) I only hear the chirp when the ball hits certain places on the wall AND I am standing in certain parts of the room. If option (1) were a factor, we would expect to see a range of frequencies initially, with lower frequencies decaying exponentially over time causing the chirp. I don't think that that is what your images indicate. Rather (B) your images show an oscillator at an initial frequency and shifting up over time. I think that (A) and (B) indicate that the shift in recorded frequency is caused by a shift of the acoustics of the room as the vibrating ball moves away the wall.

I had some audio I had taken of this effect from 5 years ago. I never thought to look at a spectrogram of the chirp to find that diagonal line, so that is very cool. I went back and did it with my own audio and sure enough...

So in terms of the changing acoustics of the room, I think it should be straightforward but tedious to calculate the theoretical slope of the line in our spectrograms:

I think there must be other ways to do it but I would go the Green's function route. I may give it a go in the next few days if I can find the time.

EDIT 7/22: Regarding the harmonics of the ball, I measured Compression vs Force for a range of forces and found k=6281N/m. Using the mass of the ball, I can the calculate

Not the answer you're looking for? Browse other questions tagged acoustics everyday-life or ask your own question.

1
The inverse square law of sound through solids?

8
Ringing sound when you flip a coin?
2
Why is there a sharp cracking sound when we break a plastic ruler?
0
Why are there usually grids in front of sound speakers?
4
The physics of sound boards
1
Weird sound coming from thermos flask
5
Why does the hiss of foam rise in pitch?