Can you explain Fermat's Principle to me?

The textbook(F.A.Jenkins and H.E.White Fundamentals of Optics) states that the Fermat's principle is that

the path taken by a light ray in going from one point to another through any set of media is such as to render its optical path equal, in the first approximation, to other paths closely adjacent to the actual one.

To be honest, I can't understand that description. But I know that

the actual ray path between two points is the one for which the optical path length is stationary with respect to variations of the path.

Are the two descriptions same?

The formal study of this kind of problem is called "The Calculus of Variations", and it requires that you have some level of understanding of integration and of partial derivatives.

You may imagine parameterizing the path taken in any way you want, say $$\vec{f}(t;\, \alpha,\beta,\delta,\dots)$$ where the function describes the position of the light ray at time $t$ and $\alpha$, $\beta$, $\delta$ etc are a set of numbers from which you build the path that you are proposing to take (perhaps they represent the angles the light takes through each material in the way). Then you find the arrival time $T$ such that $f(T;\dots) = \text{destination}$ and plot $T$ as a function of the parameters $\alpha$, $\beta$, $\delta$ etc.

The arrival time $T$ will have it's smallest value for the set of parameters that describe the path that is actually taken.

But this kind of math has certain limitations and one of them is that it doesn't actually know the difference between maximum and minimum (nor indeed can it tell either of those apart from "inflection points" which I'm not going to explain but you should have heard of if you have studies some calculus).1 Formally it is said to yield a "stationary action".

1 There are several questions around the site about manipulations of the "Lagrangian" to cause the physical path to occur at a maximum instead of a minimum, which is equivalent.

Saying that the path length is stationary, which is what the second definition says means that it does not change with respect to small changes in the path, which is what the first definition says. This is analogous to the definition of stationary points in ordinary calculus, where a (differentiable) function $f(x)$ has a stationary point at $x_0$ if the derivative $\frac{d f(x)}{d x}$ is zero at $x_0$, or more figuratively, with respect to a small change in the variable $d x$, the change in the function (to the first order) $d f(x)$ is zero.

In this case, we (or rather the photon) would be finding the stationary path $s$ for the optical path length $\Delta = \int n(s) d s$, where $n$ is the refractive index of the medium along the path $s$. The Fermat's Principle then says the actual path that the light ray takes is the one such that if we change the path a little $s\rightarrow s+\delta s$, the change in the path length $\delta\Delta$ is zero, which can also be denoted $\frac{\delta \Delta}{\delta s} = 0$.

A simple explanation of Fermat's Principle is that you can approximate the path of the light by using the path that would take the least amount of time. For example if light is passing through only one medium, its path from A to B would be a straight line. However, if light is moving through two mediums, it might take a slightly longer path in one medium if the refractive index is lower, so that it takes a shorter path in a second medium with a higher refractive index.

Have you heard the term "optimum", "optimisation"?

This is where it was inspired from. Why? Because the path a light travels ("optics"), is the "best" in a specific sense. This sense is described in Fermat's principle.

It states that a light ray will follow the path of least time (depending on the medium it is propagated). 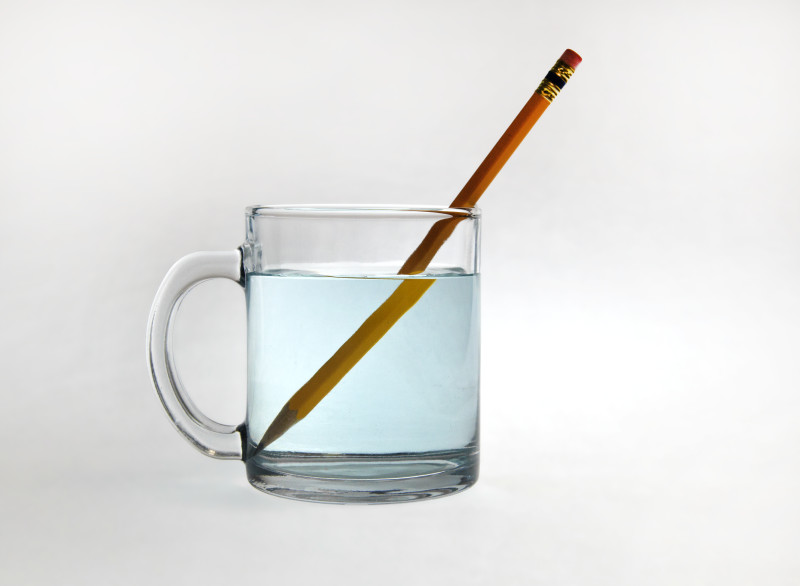 The picture of the refraction of the pencil part inside the water cup, is exactly the result of this effect. Because light inside the water (which has a different refraction index than the air), makes the light take another path in order to minimise the time the path takes.

This is a basic principle of geometrical optics (meaning study of light as a geometrical ray and not as a wave as in electromagnetism or a particle as in quantum mechanics).

116
Why the Principle of Least Action?
6
Why one should follow Snell's law for shortest time?