Relation between component and algebraic definition of covariant vectors

I studied contravariance and covariance concepts in following way: For any vector if we get its components by parallelogram way we achieve contravariant components, and if we want to get its components by orthogonal projection we achieve covariant components. For latter case we need reciprocal basis in order we can expand the vector by its covariant components. But I read somewhere, in fact covariant vectors are elements of dual space and they expanded by dual basis. My question is: how is the latter approach to covectors equivalent to previous approach? Furthermore, I need some good explanation for latter approach to covariant vectors.

In a class I'm lecturing, I mention to my students (in a very, very elementary way) that vectors and covectors do not live in the same space.

It's a typical school phrase... "Do not add apples and pears", and it's true!

If you keep in mind the custom column and row representation of a vector, you can prove that both of them (by themselves) satisfy the usual axioms of a vector. However, you can not add a column and a row vector.

With this you now understand that all the time you've been working with two types of vectors.

The thing is that, they are not related with each other until you impose a relation between them, e.g., you identify their bases through the introduction of a scalar product $$\left<e^i\mid e_j\right>= \delta^i_j.$$ Since this identification can be seem as a map from vectors to scalars, one says that covectors are objects living in the dual space of vectors.

After reading your updated question I (believe) have understood your point. 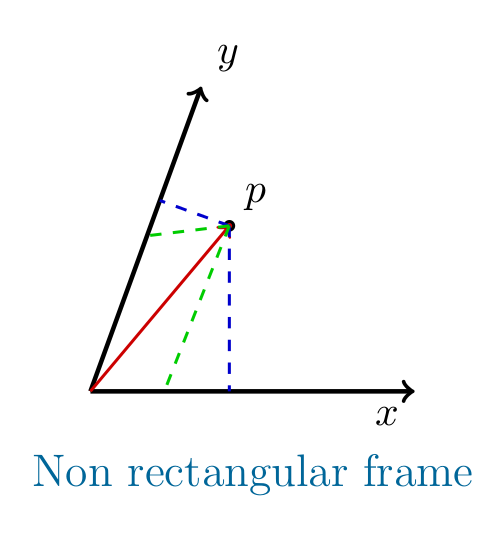 NOTE: in a rectangular frame these two coincide, and there is no ambiguity.

Why are the blue one called "covariant"?

The usual answer is... because they transform as the basis! (Yes, sure... but I don't still get it!)

A base vector defines a direction, and a flow in that direction is defined via the (directed) gradient. The gradient is represented by the set of perpendicular (hyper)planes orthogonal to the reference direction. Thus, perpendicular to that direction... sounds familiar, THE BLUE COORDINATES!!!

What about the green ones?

I could try to explain heuristically why these are denoted with an upper index, but in this stage let's mathematics do its job.

I'd do the following (I did it once and convince myself... so try to do it!):

You will get exactly the component represented by the green projection.

Why are they called dual?

Because you can always define the action of one type over the other... resulting into a field ($\mathbb{K}$). Mathematically, these define the elements of the dual space.

It is not my idea, but you can read about that in (for example) the books by B. Schutz ("A first course in Genral Relativity" or "Geometrical Methods of mathematical physics", if I remember well).

A geometrical interpretation is that contravariant vectors are arrows, while covariant vectors are perpendicular planes to a given direction, the action of one over the other is the number of hyper-planes you intersect with your arrow. That is the connection.

With the last map, you conclude that the introduction of a scalar product is equivalent to the identification of $\mathbf{U}$ with $\mathbf{V}^*$

That's how you get your orthogonal projections to achieve covariants components.

Applying this isomorphism to the generating system, gives an isomorphism between $ \vec f^i$ ("reciprocal basis") and $f^i$ (basis of the dual space):

You may find this question and especially Emilio Pisanty's answer to be enlighting with regards to what co- and contravariant vectors really are.

Now, if I may rephrase your original question a bit: *How do parallelograms and lines in $\mathbb{R}^3$ relate to co- and contravariant vectors in $T_p \mathbb{R}^3$ and $T^*_p\mathbb{R}^3$?

The above approach generalises nicely to the $\mathbb{R}^n$ equipped with some (Euclidean) metric (i.e. a scalar product, essentially):

The contravariant components of $v$ are obtained by $v^i := (v,e_i)$, which is your orthogonal projection.

Therefore, we have shown by translating the geometric idea of projecting onto hyperplanes into precise mathematical language that it is exactly the same as expanding in the dual basis.

46
Is it foolish to distinguish between covariant and contravariant vectors?