While I know that accelerating charges produces EM radiations (at least in lots of cases), most discussion about this matter only focuses on which kind of situation will emit EM radiations and which does not, with very little mention of the intuition behind this physical phenomenon.

Recently I'm trying to understand why accelerating mass generates gravitational wave (predicted by General Relativity), so I thought the first step is to understand it for charge first (they're very similar, after all), but surprisingly for the discussion I could find there isn't really any explanation about this matter.

While mathematics can prove accelerating charges sometimes radiates EM waves, I want an explanation using intuition that shows why this is true. Please don't use formulas to explain it.

Also, yes, I searched about the topic, and saw some mention of "conservation of energy" and "work done to the particle". But then, It still doesn't explain why the energy is lost in terms of EM radiation. Wikipedia said this kind of behavior has something to do with Special Relativity.

Imagine the field lines of a point charge - they all point outwards of the charge in a radial direction. Now consider the following statement: the change of the field does not propagate instantaneously, but it has to propagate through local interaction. When we nudge into the charge, a ripple in the field propagates to tell the other field lines "hey guys, the boss is moving, readjust". The following animation shows this nicely:

However, you can see in this animation that the ripple establishes the new state of the field lines and for a uniformly moving charge, there are no new ripples created. This ripple in the field is exactly what we call an electromagnetic wave.

I think understanding cerenkov radiation qualitatively might help a bit.

Cherenkov radiation results when a charged particle, most commonly an electron, travels through a dielectric (electrically polarizable) medium with a speed greater than that at which light would otherwise propagate in the same medium.

Moreover, the velocity that must be exceeded is the phase velocity of light rather than the group velocity of light. The phase velocity can be altered dramatically by employing a periodic medium, and in that case one can even achieve Cherenkov radiation with no minimum particle velocity, a phenomenon known as the Smith-Purcell effect. In a more complex periodic medium, such as a photonic crystal, one can also obtain a variety of other anomalous Cherenkov effects, such as radiation in a backwards direction (whereas ordinary Cherenkov radiation forms an acute angle with the particle velocity). 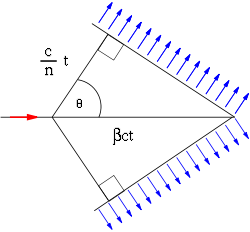 As a charged particle travels, it disrupts the local electromagnetic field in its medium. In particular, the medium becomes electrically polarized by the particle's electric field. If the particle travels slowly then the disturbance elastically relaxes back to mechanical equilibrium as the particle passes. When the particle is travelling fast enough, however, the limited response speed of the medium means that a disturbance is left in the wake of the particle, and the energy contained in this disturbance radiates as a coherent shockwave.A common analogy is the sonic boom of a supersonic aircraft or bullet.

Now the Michelson Morley experiment has dispensed with the luminiferous aether, but quantum electrodynamics has introduced the vacuum which in a sense is an all pervasive field consistent though with special relativity. One could hand wave that accelerating a charged particle distorts its uniform interaction with the vacuum and part of the energy supplied for the acceleration transits to real photons analogously to the way Cerenkov radiation the particle is braked ( negative acceleration) by the field of the medium, the energy emitted as photons. The truth is that the mathematical formulations in both cases are necessary for any solid argument.

To accelerate charges you use directly or indirectly EM fields. In accelerator tubes directly, for physical bodies indirect with surface electron-electron interaction. Part of this EM effect escape at the same moment and you get radiation. Same situation when the particles moved in circles or stopped.

Writing this I realize that it could be explaint in terms of thermodynamics too. It's never possible to transfer 100% of energy.

Not the answer you're looking for? Browse other questions tagged electromagnetism electromagnetic-radiation charge or ask your own question.

6
How EM waves are produced by accelerating charged particles?
4
Relativistic explanation of Radiation

5
Does a rotating ring of charge radiate power or not?
1
Please help me understand the intuition behind Poynting's Theorem
0
How do I understand Electromagnetism