Why isn't the sunset/sunrise rainbow-colored

When the sun is rising/setting, it goes through a phase where the light is bending from the atmosphere. I believe this image will explain much better than I ever could. 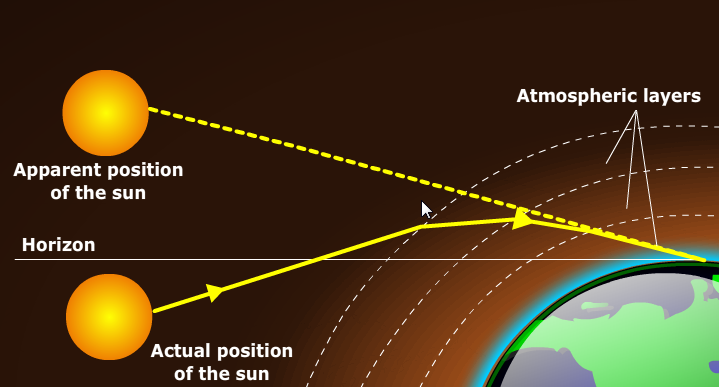 Now, if light goes through a prism, it is bent and the different wavelengths bend different amounts, resulting in the rainbow output.

If the light from the sunrise/sunset is bending, then shouldn't we see a rainbow instead of the red tint? At the very least, shouldn't the top of the sun appear more red and the bottom more purple?

First, it must be said that the picture you provided in your question is extreme. The concept of light bending is true, but the amount that the light bends is nowhere near as large as the picture shows it. The quantification of how much light bends when transferring from one medium to another is called the "index of refraction," and air's index of refraction is very very close to that of a vacuum, so the bending of the light is very small, and the spreading apart of the colors in the light from the bending smaller still. Thus, the prism effect of the atmosphere is too small to notice with our eyes.

If you check the sky after the sun has set (but still providing light), you will see different colors the further up you look from the horizon (at least, I can from my home) in a rainbow-like fashion (although much larger than a rainbow). However, I believe this is due to the Rayleigh scattering of light in the atmosphere rather than any prism effects. (Rayleigh scattering is what makes the sky blue and sunsets red).

Here is a Wikipedia article on atmospheric refraction for more information.

You don't even need highly specialised equipment to see the colour separation of the sun at low sun angles, a decent zoom lens on a camera will see it, and it's the origin of the "green flash" effect as the sun drops below the horizon. This site offers a good image: http://www.atoptics.co.uk/atoptics/gf15.htm

There are better answers than this, but I just want to contribute.

The quantification of how much light bends when transferring from one medium to another is called the "index of refraction," and air's index of refraction is very very close to that of a vacuum, so the bending of the light is very small, and the spreading apart of the colors in the light from the bending smaller still. Thus, the prism effect of the atmosphere is too small to notice with our eyes.

Where I live, the sunset is usually rainbow colored. (Notably, it is near the sea. It could be mist, but I don't know.) The sun and the horizon appears redder, and as you look upwards, the sky turns green and then blue. (For Googlers:) The reason the sun looks red is just the same reason as the sky looks blue. The sky is blue since blue light scatters more as it hits air and dust particles. The blue light, which came from the sun, appears most from the sky since it is full of dust. The sunset looks red because the red light doesn't scatter as much as other frequencies and it has more atmosphere to go through, thus more chances for the blue light to scatter away (and let the red light reach you).

The fact that you see the sun as red means that the shorter wavelengths (green, blue, purple, etc.) were significantly attenuated as the sun rays traversed the atmosphere, due to having undergone scattering. It seems to me that while some rainbow effect indeed theoretically takes place, the extent to which it happens is relatively small. Adding this to the fact that the shorter wavelengths are attenuated, it seems to me that to discern the rainbow effect on the rising/setting sun, an optical apparatus with a higher dynamic range than the range offered by the human eye is required.

If we incident a monochromatic light (assume red light) on a glass layer starting from thinner to gradually thicker and thicker layers of glass, partial reflection increases to $ 16\% $ and returns to zero-a cycle that repeats itself again and again. If the the layer of glass is just the right thickness, there is no reflection at all! And it is to be noted that the cycle of zero to $16\%$ partial reflection by surfaces repeats more quickly for blue light than for red light. In fact, that's the only difference between a red photon and a blue photon (or a photon of any other color, including radio waves, X-rays, and so on)-the speed at which the cycle repeats with the thickness.

When we shine red and blue light on a film of oil, patterns of red, blue, and violet appear, separated by borders of black. When sunlight, which contains red, yellow, green, and blue light, shines on a mud puddle with oil on it, the areas that strongly reflect each of those colors overlap and produce all kinds of combinations which our eyes see as different colors. As the oil film spreads out and moves over the surface of the water, changing its thickness in various locations, the patterns of color constantly change. (If, on the other hand, you were to look at the same mud puddle at night with one of those sodium streetlights shining on it, you would see only yellowish bands separated by black-because those particular streetlights emit light of only one color.)$_1$

If we incident sun light (polychromatic) on a prism, we are passing light over a large area with varied thickness, which can account for the consequence of rain-bow color formation. Here in the case of the earth's atospheric layers we can assume them a glass slabs of uniform thickness which can't form colors as oil puddle does.$_2$

Not the answer you're looking for? Browse other questions tagged visible-light everyday-life sun refraction or ask your own question.

19
Would you see a rainbow from refraction when the sun is in front of you?
2
Why stars are white? According to Rayleigh Scattering
0
What was the rainbow like object I saw in ice crystals this morning?
1
Why does dispersion of light behave in the opposite way for diffraction compared to refraction?
1
Why is the sky near the Earth limb warm-colored, even far from the sun?
3
Why is the western sky yellow after sunset?
0
Rainbow colors along horizon