Virtual particles are not real

The idea that charged particles interact via "exchanging" virtual photons come from the fact that the Coulomb force may be obtained by the non-relativistic limit of this diagram: 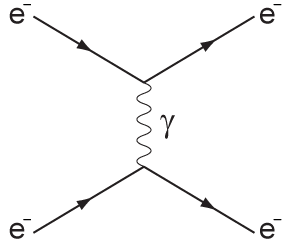 There's an internal line, thus there is a "virtual particle exchanged", but this is not a real description of what is happening, it's a story. The full interaction between two charges in the quantum theory is far more complicated and only approximated by this diagramms, of which "exchange of photon" is a natural-language description which does not do its character as a pictorial representation of a term in a perturbative expansion of the interaction justice.

Not the answer you're looking for? Browse other questions tagged standard-model quantum-electrodynamics virtual-particles or ask your own question.

6
Photon as the carrier of the electromagnetic force
1
Where do the photons mediating the electromagnetic force come from?
21
What force particle mediates electric fields and magnetic fields?
9
Is there a “difference” between photons that act as virtual particles and photons that act as the quanta of EM radiation?
3
How is the EM force exchanged over long distances?
1
Why aren't charged particles constantly shining?
0
Uncertainty principle and measurement of the mass of Virtual particles