Force to stop a moving rope vs. stagnation pressure of a fluid

For an incompressible fluid, the stagnation pressure from stopping a column of water in excess of static pressure is

We can easily compare the forms by, for example multiplying by the width of the column to obtain a linear density of the fluid, or consider hitting the scale with a continuum of infinitesimal ropes. It seems the $\frac{1}{2}$ factor would remain different.

So what is the explanation for this relative factor of $\frac{1}{2}$? I have tossed around a few ideas but I'm curious what you may think.

Your derivation of the additional force on the scale for the falling rope is wrong, both cases yield the same results.

If I understand correctly you are comparing the effect of a rope falling on a scale, to the similar fall of a liquid, something like this schematically: 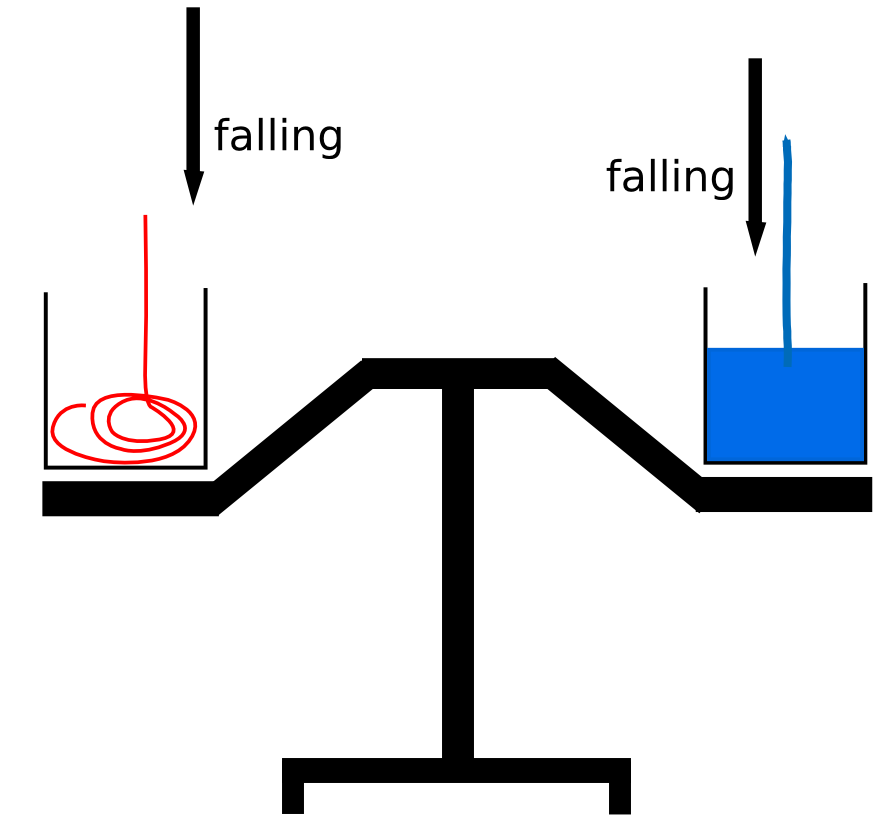 The problem of your reasoning is related to a misconception of the stagnation pressure, which takes no part in this problem. You have used a term of the Bernoulli equation usually called dynamic pressure. The stagnation pressure is the pressure inside any point of a liquid in static conditions, and it will be the maximum pressure attainable inside an incompressible liquid (see Princeton site). Here you can argue that the liquid already fallen and inside the vessel has this pressure, but in any case none of these pressures are relevant to your problem: the falling of the liquid is completely analogous to the falling of the rope, and your derivation should be the same, using $\rho$ instead of $\lambda$.

Although the expressions are deceivingly similar, they refer to different scenarios.

Now on deriving your expression, the fundamental hint indicating that the above is not true, is that if you find the work invested in stopping the rope you get $mv_o^2$ ($v_o$ is the initial velocity of the rope) which is twice the total energy (just kinetic) that the rope had initially.

1) Here we must not mistake $\Delta x$ as related to $v_o$, since it is the length of rope corresponding to the rope mass $\Delta m$. So $\Delta t = \frac{\Delta x}{v_o}$ is not the time in which the force acts (unless we assume so, and the problem is different).

3) There is no mechanical work performed here $\int W dx = 0$ since we have assumed no displacement of the scale. But in fact this would also imply no deformation of the rope, and no redistribution of the water inside the glass to fill it. So in reality the loss of kinetic energy has been invested as the work involved in deforming the rope (and redistributing water) which, although not evident to calculate, should ultimately yield $\frac {m v_o^2}{2}$ the total initial kinetic energy.

Not the answer you're looking for? Browse other questions tagged newtonian-mechanics fluid-dynamics pressure or ask your own question.

0
Force due to pressure on side of box versus weight of fluid inside box
1
Does *advection* describe the change of density of massless infinitesimal tiny *thingies* injected into a fluid?
1
Intuitive explanation for lower pressure above airfoil
1
Pressure near a submerged orifice?
0
Potential flow pressure on a smooth surface
1
Why is the continuity equation hardly used in solid mechanics when it is essential in fluid mechanics?
0
Pressure difference between two points on the Earth's surface
2
What's the relation between temperature and scale factor for arbitrary EoS $-1 < w \le 1$?