Does the Higgs boson give mass to ALL other particles? [duplicate]

The Higgs Field gave mass to other particles via spontaneous symmetry breaking; does this mean it gives mass to all particles that have mass - such as neutrinos, quarks or weak bosons and strong bosons (gluons)?

In the articles I've seen its not clear what the criteria is for the Higgs Field to couple to particles to give mass; Anna v's answer suggest that electo-weak vertexes are required; but the linked article suggests it also couples to quarks.

Gluons are bosons, they have spin one and are mediators of the strong force. They have mass 0 and there is no weak interaction vertex with a gluon.

The extract is talking of the Higgs field, not the Higgs boson. A field in physics is

A field is a physical quantity that has a value for each point in space and time at that point.

The Higgs field permeates all space and is distinct from the Higgs boson. It is the field that gives the mass to the Z and W when the electroweak symmetry is broken. Symmetry is broken at every point is space and time ( the mexican hat ) that describes the field at each point.

The Higgs boson is a particle that appears because of the group structure of the Standard Model, and is on par with all the other particles.

It is the Higgs field that gives mass to the particles of the theory which have electroweak vertices ( interactions) and to the Higgs boson itself. .

Note that the Higgs field gives masses to elementary particles. If you see that they are massive in the table it means they have weak interaction vertices and the Higgs breaking of symmetry raises them from the zero mass they would have had before breaking. 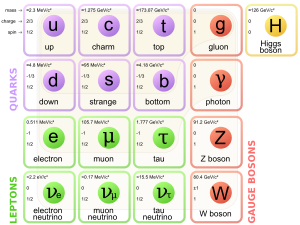 These are the particles that build up all matter

The electrons appear in the atoms, the quarks are always bound and appear according to the rules of SU(3) color. The three quarks that compose a proton, for example , exist in a tight "bag" exchanging gluons with each other, and the gluons exchange gluons with each other etc. in a "soup" of contained interactions that can be computed or approximated. This means that there are binding energies and invariant masses between all these constituents that give the mass we measure for the proton, while the central three quarks have very small masses as you can see in the table ( or go to the link for enlargement). This is due to special relativity that reigns at these dimensions and energies.

The quarks do have electroweak vertices in interacting with leptons , a simple example neutron decay: 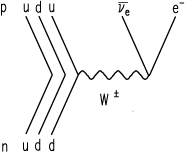 The fermions acquire mass when the Higgs field couples the left and right chiral massless fermions into the massive Dirac fermions.

Not the answer you're looking for? Browse other questions tagged particle-physics higgs or ask your own question.

35
How does the Higgs mechanism work?

7
What part does the Higgs boson play in conveying mass?
2
Is the Higgs field responsible of only 1% of the proton mass?
11
Why do people say that the Higgs mechanism gives mass to the gauge bosons without mentioning the fermions?
21
Why are gluons believed to be massless?
1
Masssive mediator boson, a game changer, so is the weak force fundamentally different from the other forces?
1
Mass of the mesons in a universe with massless quarks
2
Proton structure: are there photons, electrons and neutrinos in there too?