Why do co-rotating vortices coalesce, but not counter-rotating ones?

In studying the aerodynamics of modern aircraft equipped with high-lift devices, I have discovered that quite a number of distinct trailing vortices are present in the immediate wake of an airplane in flight (e.g. off the outboard edge of the flap, the wingtip, etc). However, they always manage to roll-up into a solitary pair of vortices after only a few seconds have elapsed (see below).

Why do the individual vortex cores in close proximity merge together? This phenomenon appears to occur only when the vortices rotate in the same direction.

Intuitive start of an answer:

If you have counter rotating vortices they have zero net angular momentum (to first order). If they merged they would have to have no motion -> where did the energy go. In between the two axes of rotation the fluid moves in the same direction and has no mechanism for dissipation.

By contrast for two vortices with the same direction of rotation the fluids in between travel in opposite directions. They cancel and that leave you with only the vorticity around the outside of the two of them, which makes them merge.

As I said - intuitive start of an answer: I hope someone else can build on it.

Because where they come close together the air in between circulates in such a way as to join them in a single path. 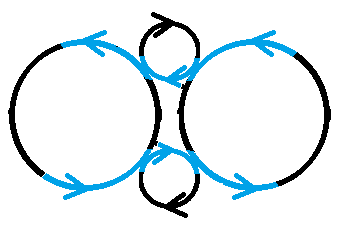 Floris is right, but maybe this picture helps.

Not the answer you're looking for? Browse other questions tagged fluid-dynamics aerodynamics drag vortex lift or ask your own question.

3
Counter rotating propellers: better in same column or staggered?
6
Why do tropical cyclones not tear themselves apart?
8
Could the phenomenon of vortex bursting be exploited to reduce wake turbulence?
1
Why do superfluid vortices form a lattice?
4
Why do 2D hydrodynamic vortices merge?
6
Why are vortices stable?