Ball thrown from a moving train

This is not a question about throwing a ball vertically in a moving train. I am asking what would happen if I throw a ball in a horizontally in a moving train. Assume I am facing an exit door of a train and I throw a ball out of the exit door. Now my question is will the ball continue in a straight path for an outside observer or curve. How will it appear to me. I said curve because since the train is moving, the ball also has some initial sideways momentum perpendicular to the direction it is thrown in. The image below shows a visual description of the scene. 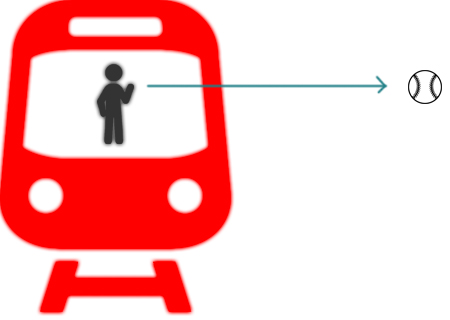 The $z$-axis is the axis along which the train and the man are moving.

We neglect air friction and also the effects of gravity.

Let me first go through this without friction or air drag.

From the observer in the train, the ball will move with a constant $v_y$ away from the train. There is nothing that slows it down. Also, there is no $v_x$ component in the motion of the ball relative to the train. So the man on the train will see the ball right in front of him, flying further away and starting to fall down with $v_z = - g t$. There will be a curved trajectory, a parabola in the $y$-$z$-plane, the plane where the train is moving perpendicularly to. 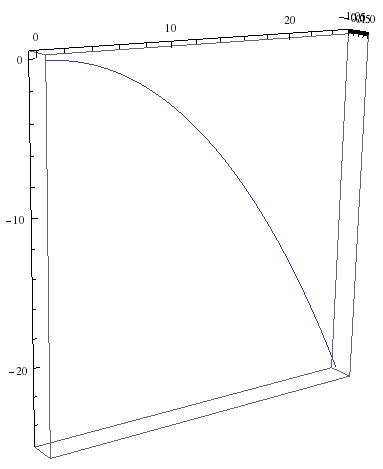 If you are an observer such that the train is moving with respect to you, you will see the ball moving with a constant velocity in $x$ and $y$, but also seeing it start to fall down. So you see a parabola in a plane that is crosswise to the axes.

I made another picture, you are looking at the front of the train, just a little skewed to see the 3D axes: 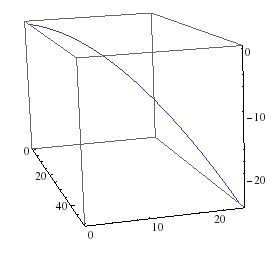 Alternatively, you could apply a Galilei transformation to it. I will try to be pedantic since transformations from coordinate systems are hard to get right. I just have done months of general relativity, so I know how hard this is :-)

Air drag will cause the ball to slow down in each of its velocities, bending the curve even more.

If you look from above, this is the same as ignoring gravity. It looks like this: 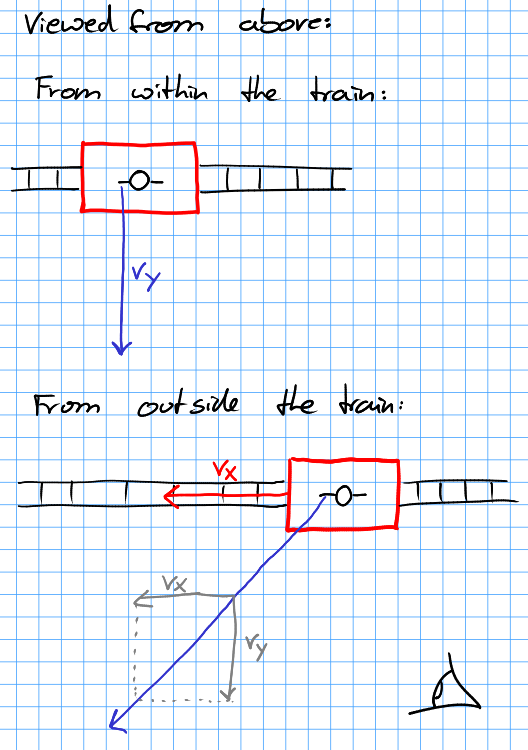 When you are in the train, you will see the rails moving below you, and the ball will just move in your $y$-direction: 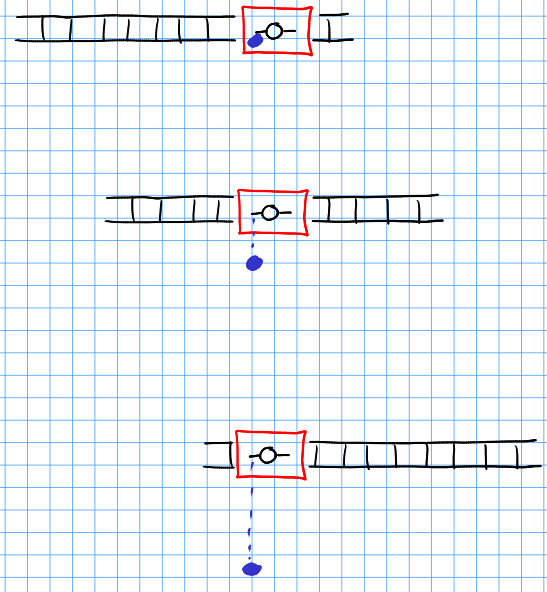 When you are outside, you will see the train moving. The ball will always be in front of the person who threw it. Therefore it will move on a diagonal line. That line is straight, however! 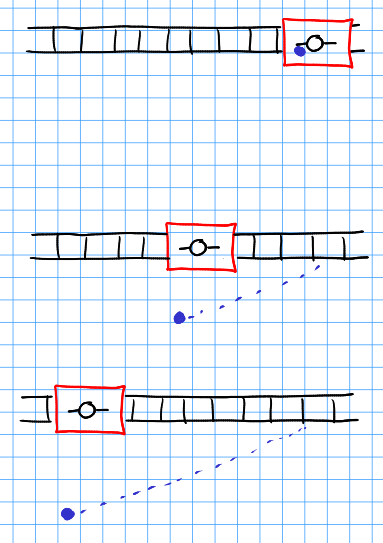 Assuming that the train is an inertial frame of reference (non-accelerating) and if we neglect both air friction and the effects of gravity, then the ball will move in a straight line away from you at the same speed which you threw the ball at until some other force acts on the ball. This situation would look the same as one where you threw the ball while standing still.

Vg is what the person floating next to the train would observe.

This question is illustrative of Newton's first law.

Let me make you precise about conventions, because your notations are unconventional. Suffix in a vector quantity is always represent the component along specific direction, component of velocity $v$ along x-axis is denoted by $ v_x.$ However, your question is precise irrespective of your conventions used.

Insight into your problem

You have made precise that ignore the effects of gravity.
Even if you throw the ball out of the train in perpendicular direction at some specific moment of time, it will not appear to be perpendicular to you when you observe from the train, But for an outside observer, it will be perpendicular to the train which is moving. Both for you and outside observer, the ball will take straight line as long as it is not accelerated.
Always have in mind, curve trajectory generally occurs in the condition where velocity and acceleration acting on a ball in perpendicular. In your question, it occurs in two cases

Not the answer you're looking for? Browse other questions tagged newtonian-mechanics kinematics reference-frames projectile relative-motion or ask your own question.

0
What would happen if a ball flew through the open window of a car?

5
Will a ball thrown straight up in a train land in same spot (in real world)?
1
Do observers at different speeds perceive other speeds differently?
1
$V_{\rm ball}=V_{\rm train}+V_{\rm ball}$?
0
Differential equations ball with air resistance
3
Inertial reference frames vs. non-inertial reference frames
0
Throw a ball AT a moving train, in what direction does it reflect?
0
What happens when a person standing on the ground throws a ball at the door of a moving train? Will it pass through the other door?