Why can charges outside be ignored in Gauss's Law?

In MIT's 8.02 course, it is shown in lecture 3 that we can derive Gauss's Law from Coulomb's to get

I've been thinking about it and came across Can someone give an intuitive way of understanding why Gauss's law holds?.

The first answer by user levitopher helped a bit. I think that the lecture's argument still holds when there are charges outside because $ \vec{E} $ is added vectorially.

I'd just like to know if this argument is sound.

The argument is perfectly sound. Hand waving is a diminutive term for this, since this really is the essence of Gauss' Law. Here is a succinct physical answer, without using maths, which you can use to make sense of the situation.

Field lines due to charges located outside will cross the surface first while ''going in'' and then, while ''going out'', and hence, net flux through the closed surface $S$ will be zero. The only way in which they will contribute to non-zero flux is if there is some positive or negative charge(s) located inside, since e.g. electric lines of force originate from a positive charge and terminate on the negative charge. See here for example.

Thus, with a positive charge in the surface, there is non-zero out-flux, and with a negative charge, a net non-zero in-flux. With both positive and negative charge inside, net effect depends on ''which ones are more'', which is why you have that $Q_{encl}$ on the right hand side. An illustration for each of these three cases can be seen here.

Your "conservation of field lines" argument is solid, otherwise you have basically just used Gauss's law in your work above. By the divergence theorem and Maxwell's equations, $$\int \vec{E}\cdot \vec{dA}=\int \vec{\nabla} \cdot \vec{E} dV=\int \rho /\epsilon_0 ~dV=\rho_{enc} / \epsilon_0$$ So the (flux of) electric field only depends on the enclosed charge.

But, I really think the "hand-wavy" argument is quite good. If you assume no discontinuities in the electric field, then all the field lines entering must exit the region. Fields lines can therefore only start/end with charges, but if those charges are inside the region then you have taken them into account already. I think it's one of the better hand-wavy arguments we have :-)

Other answers have already said why that should be zero physically. But maybe you are interested in mathematical proof.

Take a point charge from the charges outside the surface. Find out the flux due to it. In the following figure see how the flux passing through the surfaces $d\vec{S_1}$ and $d\vec{S_2}$ due to this charge(q) cancel each other. 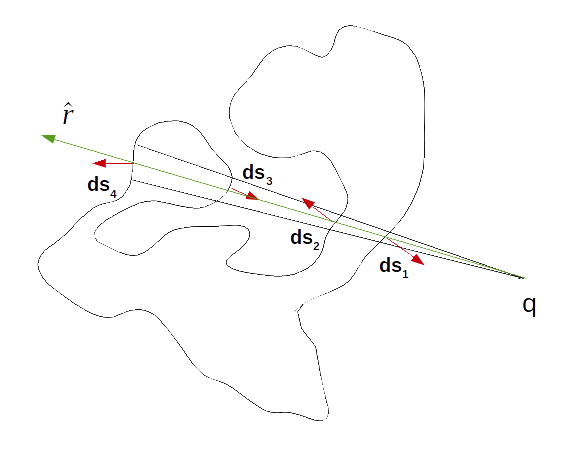 similarly, by taking all such pairs of infinitesimal surfaces you can prove $ \oint \vec{E_{q}} \cdot \vec{dA}=0$.

I think it's worth approaching your question from a bit of a different point of view. We know that the electric field is a vector field. In general, the divergence of a vector field is a measure of field sources/sinks. This is just an interpretation of a mathematical property, and applies to any vector field. We'll use the symbol rho to signify the field source.

The constant of proportionality depends on what units you want to measure your field source in. I'll symbolize the constant as epsilon.

Then we can integrate over an arbitrary volume.

Now imagine a source that exists at a single point. By circular symmetry, the field must be perpendicular to a spherical surface around the point, and constant magnitude at a given distance from the point.

So that's almost coulomb's law. To finish the job, you also need to know how a force relates to the electric field. There's actually a sign ambiguity from the orientation of the surface, that I conveniently ignored. This corresponds to the arbitrary choice of which charge is positive or negative.

This is somewhat remarkable: we started with the properties of a vector field, chose arbitrary constants, chose a point source in 3 dimensions, and derived effectively coulomb's law. Gauss's law is really just a general property of vector fields, and coulomb's law follows from geometry, combined with the lorentz force. This equation, $$ E = \frac{q_{point}}{ 4\pi \epsilon_0 r^2 }$$ applies to any vector field with a point source in 3 dimensions, where the constant $\epsilon_0$ defines the units, and nothing more.

In my humble opinion, the most confusing step in this whole derivation is the use of the divergence theorem. I believe your dissatisfaction stems from how the divergence theorem can ignore sources outside the volume/surface of integration. This isn't really a problem with Gauss's law though, which holds anyways.

2
Why is $\oint_S \mathbf{E}\text d\mathbf{s}=q_{in}/\epsilon_0$ valid when finding electric field inside charged sphere(charges are inside sphere)?
1
Does Gauss's law not hold when there are charges outside of the Gaussian surface?
1
Net Electric field on a Gaussian surface

0
Flux if there were only one type of charge in the universe
8
Can someone give an intuitive way of understanding why Gauss's law holds?
19
Field between the plates of a parallel plate capacitor using Gauss's Law
0
How does the dieletric displacement change among two dieletric materials?
1
Electric flux of a closed surface, $\Psi = Q $ or $\Phi =\int\vec{E}\cdot d\vec{A}$
1
Conceptual question on Gauss's Law
1
Gauss's Law - Charge Enclosed
8
Deriving Coulomb's Law from Gauss's Law
3
Question on Gauss's law
0
Concentric Conducting Spheres and Gauss's Law