Experiments which show the phenomenon of closed electric field lines

In german physics introductory texts often the following experiment is cited which "shows" that a changing magnetic field can induce an electric field with has closed field lines. Here is a picture of the setup: 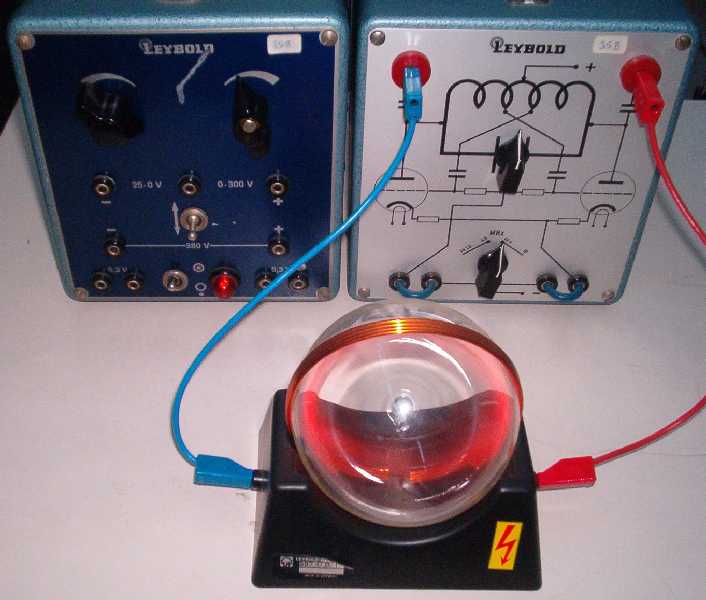 A high frequency ac-voltage is applied to a coil around a glass sphere which is filled with a gas. Then a circular lighting effekt occurs as shown on the image.

I have some questions about this:

One: I honestly don't know. I was already hard for me to find this experiment in german - although german is my mother tongue. ^^ I finally succeeded with Ringentladung, which I tried to translate into english but the only thing I could find is this. Maybe a native speaker can help here?

Two: The electric discharge - which causes the gas in the sphere to shine - is caused by the shaking of the charges in the varying electric field. While they are shaking back and forth, they transfer energy to other gas atoms nearby, which in turn emit their energy in form of radiation. I think your question is this: how can I know in which direction they are shaking? It's true that from the picture alone (and from not knowing Maxwell's equations) I'm not able to tell if the charges are shaking radially outwards and inwards or along a closed loop. It could be that somehow the radially inward and outward shaking is proportional to the magnetic flux, which is maximum at the edge - that's why the shining ring is the brightest there.

Now, when you go back to the experiment, the gas in the chamber is initially neutral; that's why nothing is shining at the beginning of this video. When you charge the rod and and bring it near to the sphere, you separate some charges: now you have free charges which then initialize the "shaking back and forth" process.

What would then happen if the shaking were radially?

Only if you account for the sideways motion you can explain why there is a full circle, even if you just created free charges at one spot: first you have a few charges, they shake to the right, knock some other electrons from the molecules, so you have some electrons more. This same procedure now in the other direction etc., in a cascade-like manner, until the whole circle is complete.

But I'm not entirely sure here.

Three: One way is this:

You start with one of the Maxwell's equation and integrate over the area ($\int d \vec A$):

Now the first term can be converted into a line integral, using Stokes theorem, while the second one corresponds to the change of the magnetic flux induced by the alternating current in the coils. For simplicity take the magnetic field produced by the coils as $\vec B_0 sin(\omega t)$, then the equation reads:

At the end you have $$E \propto r, $$ which is why the shining gas is the brightest at the edge of the sphere: the induced electric field rises linearly with the distance from the center.

Four: Hm, not that I can think of. Maybe you want to look at Eddy currents, which are also generated by induction and which are also closed loops of electric field lines. Or maybe take a look at this.

This is an example of Faraday's Law, one of Maxwell's equations:

Which relates the curl of an electric field to the time-derivative of a magnetic field.

If you consider a static electric field, you can describe the entire system with only Gauss's Law:

for a point particle in this field. This is very similar to Gauss's law of gravitation, which makes a lot of sense. Potential theory tells us that force is simply the spatial derivative of potential for a conservative field. So what happens when we allow the system to evolve, or move to a different inertial frame? Suddenly, the $E$ lines become skewed, and the field is no longer conservative; it now has some curl! This gives rise to the corrective force called magnetism which we know and love.

The reverse effect is also true: if you subject an electric field to a changing magnetic field, curl will be induced in the electric field. This is manifest in the rotational motion of the free elections within the gas in your experiment.

Not the answer you're looking for? Browse other questions tagged electromagnetism experimental-physics electric-fields or ask your own question.