This Veritasium video explains how electromagnets can be explained by special relativity, and how the magnetic field surrounding a current-carrying wire can also be viewed as an electric field, if your frame of reference is moving with respect to the wire.

The example they use is a positively-charged cat, moving along a current-carrying wire in the same direction as the electron drift:

This makes sense and is all kinds of elegant and intuitive. It explains electromagnets in a way that depends on only three simple concepts:

Groovy. Now back up in the video. Derek says:

Now the number of protons is equal to the number of negative electrons, so overall the wire is neutral. So if there were a positively-charged cat nearby, it would experience no force from the wire at all. And even if there were a current in the wire, the electrons would just be drifting in one direction, but the density of positive and negative charges would still be the same, and so the wire would be neutral, so no force on the kitty. 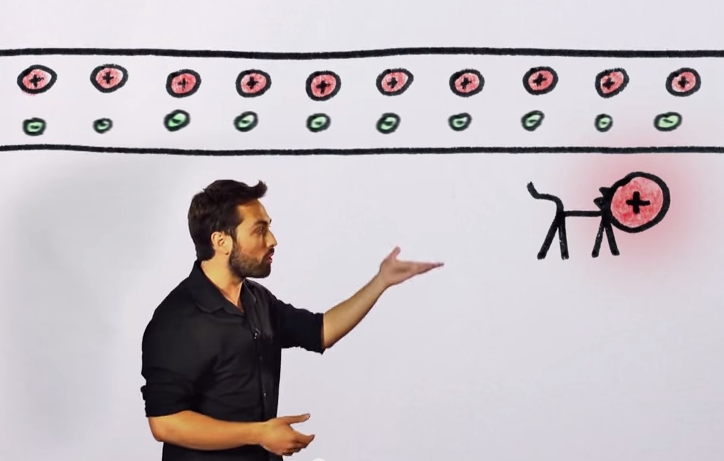 How can you say "well, length contraction creates charge imbalances, allowing magnetic forces to be explained as electrical ones if you choose the right reference frame", but simultaneously say "but length contraction doesn't happen sometimes"? That's not elegant at all. Is there an elegant, intuitive1 explanation?

1: meaning, I've seen the math on Wikipedia and it's over my head. There is also current in wire + special relativity = magnetism where the answer to my question seems to be "the Lorentz force". OK, but that negates the elegance of the explanation above, with only three simple axioms. Are they not sufficient? If so, why?

What is potentially confusing is that as far as the electrons themselves are aware (electrons are not "aware" of anything, but never mind), they are not that the same mutual distance when they are moving as when the wire carried no current.

In other words, the row of electrons is not a rigid object. If each pair of neighboring electrons had been separated by a little rigid rod, the electrons would have to come closer together when the current starts flowing. But there are no such rods, and the row of electrons is free to stretch when the current begins to flow, and this stretching is exactly canceled out by the length contraction, such that in the lab it looks like the distance between the moving electrons is the same as the distance between the stationary protons.

What does the cat see? When the wire didn't carry current, the electrons and protons moved backwards together at the same speed (and with the same contracted spacing as the cat sees the protons have during the entire experiment). Then, when the current starts to flow, the electrons in front of the cat begin coming to a halt (with respect to the cat) slightly before those behind it. So from the cat's point of view the row of electrons get significantly stretched.

Meanwhile, Derek will see all the electrons begin to move at the same time. The cat and Derek do not agree whether two electrons changed their velocity at the same time or not -- this is relativity of simultaneity and is mathematically necessary to make length contraction consistent.

Yet, the video suggests that a non-moving charged cat in proximity to a current-carrying wire will experience no force one way or the other.

First, consider the current carrying wire without concern for the cat.

We stipulate that in the frame of reference in which the wire is at rest, the wire is electrically neutral.

The above is crucial. If there is a positively charged cat at rest with respect to the wire, there is no Lorentz force acting on the cat since

(1) the wire is electrically neutral in this frame

Now, stipulate that the cat is moving along with the drift electrons. Then, in the frame in which the wire is at rest, the cat is acted on by a magnetic force only since, in this frame, the wire is, by stipulation, electrically neutral.

However, in the frame in which the cat is at rest, then, compared to the rest frame of the wire, we have

(1) the drift electron density is smaller

Thus, the wire is no longer electrically neutral in this frame and there is an electric force only acting on the cat.

In other relatively moving frames, there are both electric and magnetic forces acting on the cat.

You're not thinking clearly here. The following three statements can all be true without logical contradiction:

(1) Electrons in the wire are moving in Derek's frame

(2) The moving electron density is greater (their spacing is contracted) in Derek's frame compared to some (but not all$^1$) relatively moving frames.

(3) The wire is electrically neutral in Derek's frame.

Ok, you may be asking why the electrons aren't contracting, from what Derek said in the video. However, Derek and MinutePhysics did a terrible job at explaining how electromagnets work from Special Relativity. When he says "protons" he actually means the spaces that the electrons leave when they drift. The reason he said "protons" was because his goal was to make the video as least complicated as possible, but this ended up screwing it up. The only reason those "+ signs" are positive is due to the fact that the electrons aren't there. The electrons are indeed contracting, and the density would increase, along with the positive spaces. However, when you are moving with the same v as the electrons, only the positive spaces will contract, increasing only the density of the spaces, but not the electrons.

I hoped this helped. If you don't understand it at first thought, just take a 2-hour break and start thinking about it again. Don't sweat it, it took A brilliant physicist about 10 years to think of this theory! Also consider drawing what I just said on a piece of paper, and I am sure it will click with you.