I've been struggling with the concepts of these three terms - Fermi Energy, Fermi Level and work fuction. Now, I was given these definitions (in the context of semi-conductors):

I'm not sure how to grasp the relationship between these definitions. In one of the classes, our TA gave us this "formula"; $WF=\left|FL+FE\right|$

Meaning, the workfunction of a metal equals the absolute value of the sum of its Fermi Level and Fermi Energy. I tried to visualize this through the Band Model, and this is the result: 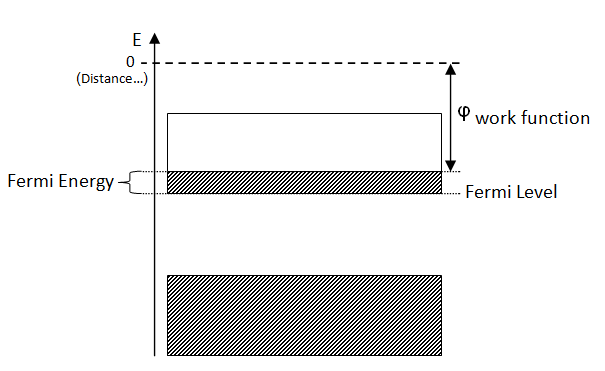 Is this visualization correct? Are these definitions (again, in the context of semiconductors) correct? If not, what are the correct definitions and is there a connection between the three of them?

The difference between Fermi energy and Fermi level is described in a previously asked question. To summarize, you're correct that the Fermi level is the energy at which (in a 0K system) all of the lower energy states are occupied while all of the higher energy states are unoccupied. For a system not at 0K, the Fermi energy is the energy state that has a 50% likelihood of occupation. With nonzero temperature we may only talk about the probability distribution of electrons in energy levels. The likelyhood of an electron to be in an energy state $\mathcal{E}$ is $f(\mathcal{E})$, where $f$ is the Fermi function.

The work function is defined as the energy necessary to remove an electron from the surface of a metal: $W = -e\phi - E_F$. Here, $e\phi$ is the energy of the electron just outside of the surface of the metal ($\phi$ is the electric potential just outside the surface) and $E_F$ is the Fermi energy. Recall that there are electrons with energies higher than $E_F$ and there are electrons with lower energy than $E_F$-- for these electrons it is easier (harder) to remove them from the metal. By only taking $E_F$ into account the work function is effectively averaging over all possible energy states weighted by the probability of the state being occupied. Getting to your first question, the equation $W = |FE + FL|$ does not make sense to me, because in many systems the Fermi level and energies are similar if not identical, I don't see what adding them would accomplish and why this would yield the work function. Also, the work function is very heavily dependent on the surface properties of the metal, which are taken into account via the potential $\phi$ just outside the surface. I don't see how surface properties are taken into account in the equation your TA wrote.

Now, because for non-0K systems you can only talk about the probability of an energy level being occupied, your band diagram is a bit oversimplified for our discussion. See instead the band diagram in the "Fermi Function" section here. This band diagram is that of a semiconductor, which you can tell because the band gap is small enough for the Fermi function (read: probability of energy state occupation) to be nonzero in the conduction band. However, the point at which the probability of occupation is 50% (read: the Fermi energy) is the same as the Fermi level for all temperatures. Notice how the Fermi function stretches out with increasing temperature, causing an increase in likelihood of electrons occupying the semiconducting band -- this is the picture of a semiconductor that I carry in my head (and also clearly explains why heat increases conductivity).

Another minor correction to your picture is that the energy of an electron just outside of the surface of the metal is not necessarily zero (it's $e\phi$), the work function is the energy difference between being just outside of the metal and being at the Fermi level, and is not the difference between being infinitely far away (0 energy) and being at the Fermi level.

32
What's the difference between Fermi Energy and Fermi Level?
-1
why is photoelectric effect independent of temperature

32
What's the difference between Fermi Energy and Fermi Level?
2
Band Structure and Carrier Recombination/Generation
2
Is Fermi Level a property of the material?
2
Fermi level and chemical potential in doped and pure semiconductors
4
Why does an energy band crossing the Fermi energy mean the gap closes?
5
What does it mean if the Fermi level crosses into the valence band? How about into the conduction band?