Why do nuclear bombs make a mushroom?

Atomic bombs make mushroom. It's well-known and we've seen many images of atomic experiments around the world. My question is, what causes the mushroom shape? Do conventional explosives like TNT and grenades also make mini-mushrooms? Is it a physical attribute of the explosion, or something specific to nuclear energy?

It's due to the Wikipedia: Rayleigh–Taylor instability: an instability of an interface between two fluids of different densities, which occurs when the lighter fluid is pushing the heavier fluid.

A mushroom cloud is formed by hot wet air: 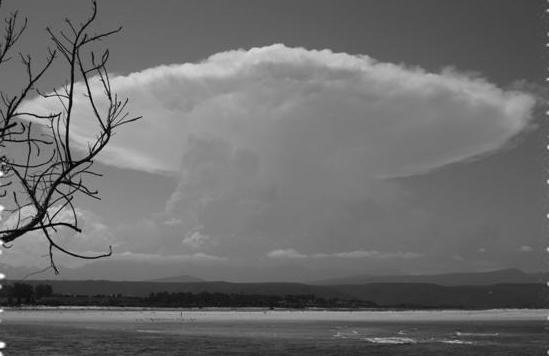 Search for images or videos of 'Rayleigh–Taylor'.

The physics of a mushroom cloud due to an explosion are described in this Wikipedia page. 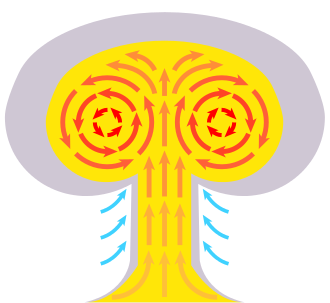 To summarize: the explosion causes a massive fireball above the ground which rapidly floats upwards like a hot air balloon. The internal motion of the fireball causes a vacuum effect which draws dust up from below causing the stalk of the mushroom.

As to the second part of your question - There is nothing special about a nuclear explosion in this respect except its scale. For example this Youtube video includes a 500 tonn TNT explosion clearly forming a mushroom cloud.

Helder's answer is good, but I feel it doesn't quite answer all your questions explicitly.

What causes the mushroom shape?

This is the part Helder answered well, no need reason to repeat it.

Do conventional explosives like TNT and grenades also make mini-mushrooms?

It doesn't matter what causes the explosion, the only thing that matters is how strong it is - mostly, how much energy is released. Conventional explosives are perfectly capable of making a mushroom cloud, although I'd say that it's impossible to pack enough explosive in a grenade. Something like nuclear or anti-matter grenades might be capable of producing a mushroom, but note that it would be wildly impractical - there's no way you'd be able of throwing the grenade far enough to be able to use it safely.

Is it a physical attribute of the explosion, or something specific to nuclear energy?

Volcanoes are an example of a natural explosion that can cause a mushroom cloud. And it doesn't even need an explosion in fact - the only thing the explosion does is supply the energy to heat enough of the air fast enough to ensure the resulting air movement is going to behave just so. The same effect occurs when e.g. water is suspended above oil (oil having lower density) and the oil starts to move upwards; ink can also commonly be used, as well as heating coloured water.

It's also suggested that mantle plumes behave in the same manner - the less dense rock from deep in the mantle (perhaps even from the core-mantle boundary) is gravitationally unstable (another way to say "lower density than everything around" :D), and when it overcomes whatever is binding it down, it starts rapidly (well, in geological terms; it's still rather slow on human scale) accelerating upwards, forming a distinctive mushroom shape.

All of those aren't exactly the same - for example, some depend on continuous heating (think a lava lamp), but they're still relevant.

Not the answer you're looking for? Browse other questions tagged fluid-dynamics nuclear-physics atmospheric-science nuclear-engineering explosions or ask your own question.

26
Why does a nuclear explosion have directionality?