Being from a mathematical background, physicists' intuitive arguments always seemed challenging for me to follow. I am currently reading a book called "Synchronization: A Universal Concept in Nonlinear Sciences". The book is well-written but from time to time, I have hard time following the intuitive arguments. In its most simple case the authors discuss the effect of a periodic external force on a self-sustained quasilinear oscillator. I have to emphasize that these are arguments in chapter 3 of the book. Things get more formal in chapter 7. The only problem is that in chapter 7 there is no argument about potentials anymore. In chapter 3 the argument mainly relies on a few parameters, $\overline\phi_e$ being the initial phase of the forcing oscillator which has the following phase relation $\phi_e=\omega t+\overline\phi_e$ and the driven oscillator is based on $x(t)=A\sin(\omega_0 t+\phi_0)$ and the external force varies based on $\epsilon \cos(\omega t+\overline\phi_e)$. The following points are the main things that I don't understand:

The following figures might be helpful for this clarification: 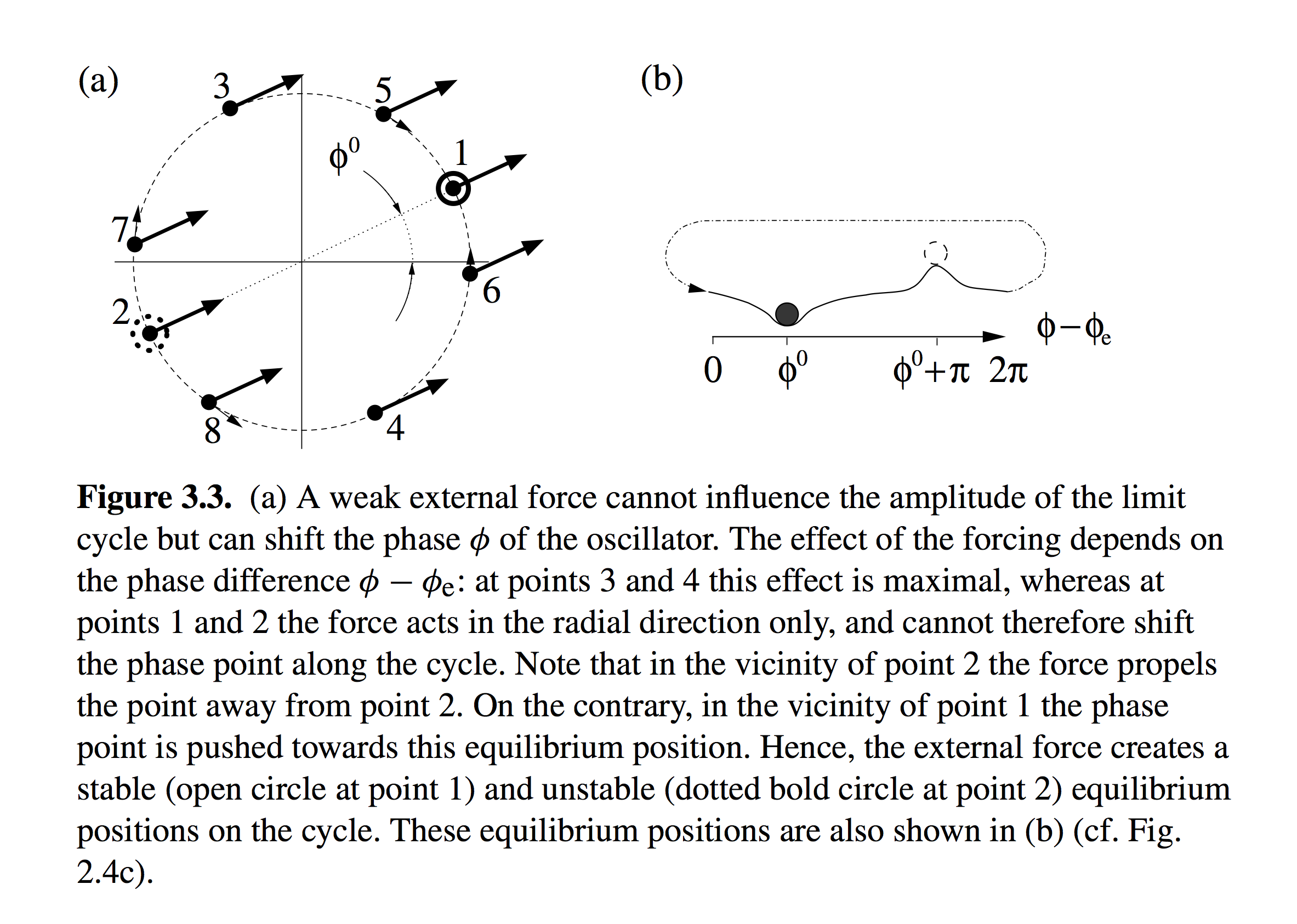 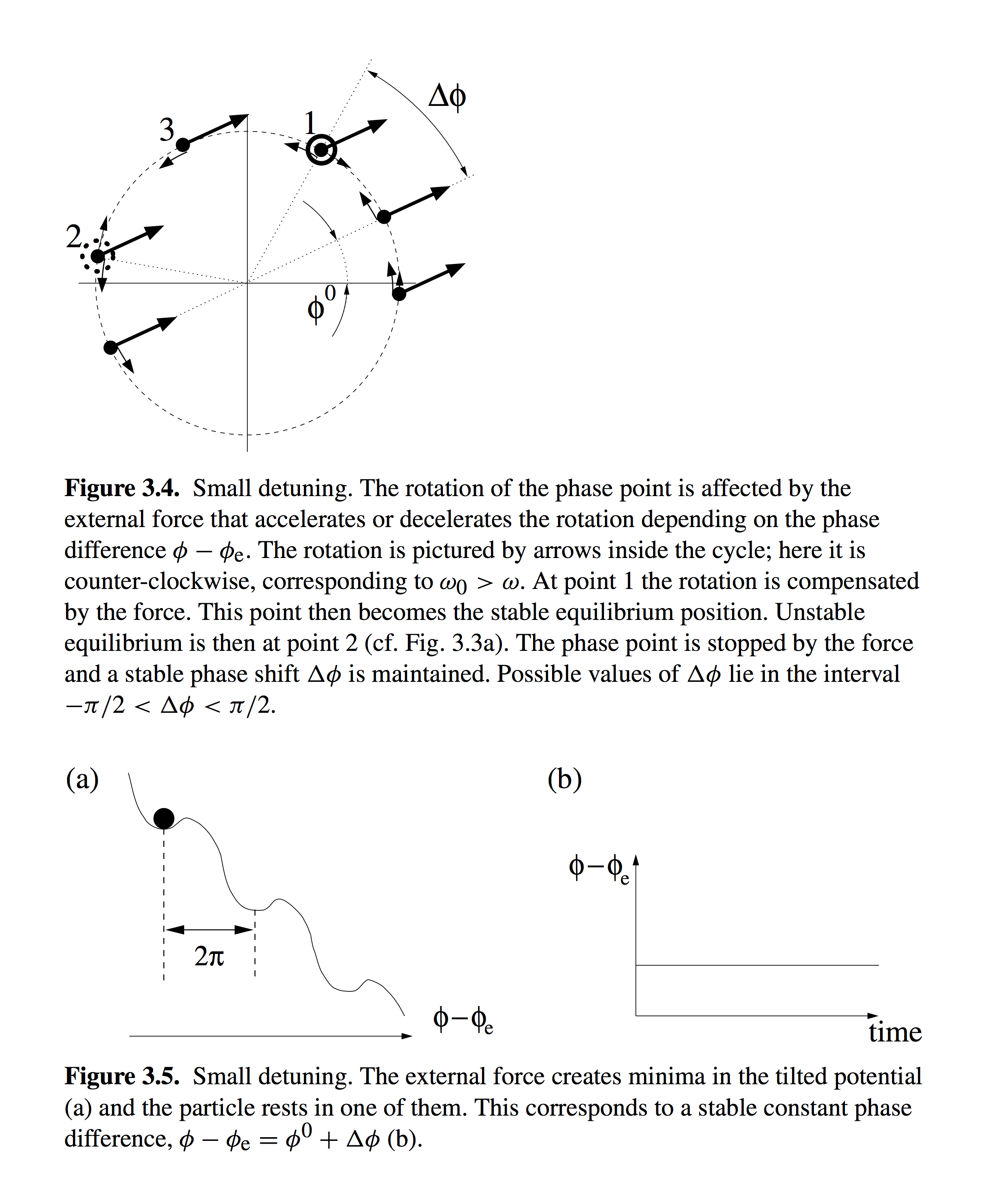 1 What does potential mean?(I know that potential function defines an invariance most of the times, but how it is defnied for oscillators case?

2 What are big parallel vectors and the small ones in figure 3.3(a) representing?

3 Why they phase locking take place in $\phi_0$

Because $\phi_0$ is a point of minimum potential energy. Then the gradient in that point is zero. Hence the force on the body is zero (in that point).

4 Why point 1 is stable and point 2 is not? I imagine stability means the point with minimum level of potential. I hope the answer to this question becomes clear if I get an answer for the first question.

Stability is another super-complex topic: you can get an idea here: wikipedia page on stability theory. Simplifying a lot, a particular "situation" (actually a point in the phase space) is stable if after an arbitrary long time interval the system has evolved into a "situation" that is very close to the initial one. In a limit case, initial and final situations can be the same. (Here I'm not referring just to position, since velocity is also needed to specify the "situation". The key concept here is phase space)

What do you need to know here? That an energy minimum is a stable position, while a maximum is an unstable position. Why that if in both position the force acting on the body is zero? Because a small variation in position gives you a force driving you back to the minimum in the first case, while in case of a maximum that force drives you in a direction opposite of the minimum.

That's all. But really consider studying a little bit of mathematical physics before reading your book. In order to appreciate it you need to know those basic concepts; it think that otherwise you could have some real issues understanding the topic.

The argument here is to relate the phase space of self-sustained oscillator with the system of bead in a ring in viscous fluid.

What does potential mean?(I know that potential function defines an invariance most of the times, but how it is defnied for oscillators case?

If you don't like how the figure draw, you can just rotate the figure until the force vector pointing downward. Then it is exact a bead in a ring in viscous fluid under gravity and you should be able to understand most concept immediately.

For any conservative force field $F(r)$, potential energy $V(r)$ is always well defined by the integral $V(r)=-\int F(r)\cdot dr$. The force here is constant (so it is conservative). Its magnitude is given by $\epsilon$, and the direction depends on how it drive the system.

What are big parallel vectors and the small ones in figure 3.3(a) representing?

In Fig. 3.3, the big vectors is the "force vector" in phase space, small one is its parallel component to the ring.

For non-zero detuning, say $\Delta=|\omega_0 -\omega|>0$, you would expect the particle move counter-clockwise because it rotates faster than your rotating frame $\omega$. This create effective force as shown in Fig. 3.4. Its magnitude is constant, and its direction is always parallel to the ring as expected. Fig. 3.4 explains how these two force can balance out and create two points of equilibrium, or no point of equilibrium.

Why they phase locking take place in ϕ0

For a bead in a ring in viscous fluid under gravity, you will expect that the bead will move to the lowest point, which is $\phi_0$.

Why point 1 is stable and point 2 is not? I imagine stability means the point with minimum level of potential. I hope the answer to this question becomes clear if I get an answer for the first question.

This picture can be somehow understood by the dynamics equation: $$\ddot{x}+\omega_0^2x = f(x,\dot{x}) + \epsilon p(t)$$ The $f(x,\dot{x})$ is the internal dynamic and $\epsilon p(t)$ is the external driving force. To understand the basic idea of limit cycle, you need to know the simplest example: damped and driven harmonic oscillator.

Not the answer you're looking for? Browse other questions tagged oscillators coupled-oscillators or ask your own question.