According to my textbook, if a square loop with mass $M$ is allowed to free fall (with a magnetic field at the bottom side and as soon as the square loop is dropped then the area inside the loop begins to be filled with more and more magnetic field) through a magnetic field, it will reach a terminal velocity. This is due to the increase in magnetic flux through the loop which creates a current in the loop opposing the change in magnetic flux and then a force is then exerted on the bottom side which balances out the gravitational force. The force on the loop sides balance each other out and by the time the top side enters the magnetic field then the flux is not changing. The terminal velocity is given as:

However, when a metal disc is dropped from just below an infinite wire carrying a current I, there is no terminal velocity even though the magnetic flux through the disc (falls so that magnetic field is perpendicular to the circular face where $A=\pi r^2$ is changing due to the change in magnetic field strength as the disc falls further from the wire. (Second picture below) 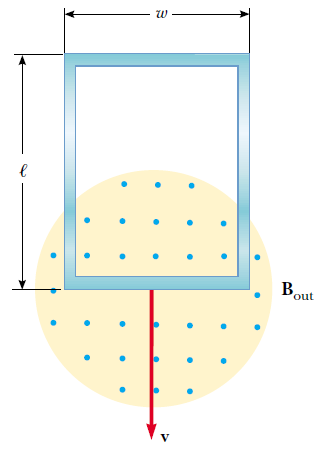 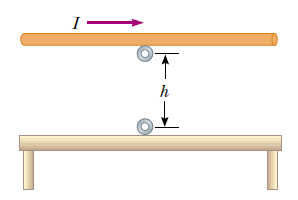 It's because with the square loop, it's the top or the bottom horizontal wire that is giving the force (depending on if the loop is entering into the field region from above or exiting on the bottom). The Lorentz force law shows F = q(v x B) where v is the velocity of the moving charges, not the velocity of the wire/disk.

In the case of the wire entering the field region from the top, the flux is increasing so a current will be induced to decrease the field within it, which means the current would flow clockwise. If the current is flowing clockwise then charge is moving to the left on the bottom part of the square loop. If you look at q*(v x B), that force vector points upward and opposes gravity.

In the case of the disk falling away from the wire the current would flow clockwise to increase the flux of the field that's pointed into the screen (which is decreasing as 1/r from the fall). In this case, the charge velocity is in the angular direction and the resulting q*(v x B) force will be in the radial direction and hence cancel out.

Not the answer you're looking for? Browse other questions tagged magnetic-fields induction or ask your own question.

3
Cause of electromagnetic induction?
6
Non-conservative electric fields due to changing magnetic flux?
1
Force on a loop with induced current
2
Two questions about the nature of induced emf
7
What force causes the induced EMF of a loop? And, the difference between a loop EMF to motional EMF?
0
Induced Current and Force
0
Magnetic force on a triangular loop
0
Finding the induced current in a loop and force acting on the conductor
0
Straight wire with constant electric current and square loop in the gravity field