Why must a singularity form inside a black hole? [duplicate]

What is the exact reason that normal matter can not exist within an event horizon?

I can understand how a super-dense object like a neutron star could accrete mass until its physical radius is less than its Schwarzschild radius and an event horizon forms around it.

Why must all matter within an event horizon undergo complete physical collapse to a point?

Basically, the reason is that if the matter is to keep a positive mass, the amount of force required to keep the matter distribution stable tends to infinity once the matter is fit within the schwarzschild radius for that given mass. This was proven in a very strong sense, without much in terms of assumptions about the particular form of the metric, by Roger Penrose and Stephen Hawking in the '60s:

Let me attempt a slightly different approach to the other two answers. The geometry of spacetime around a static black hole is described by the Schwarzschild metric. The metric can be written down in various ways, but I think the one that best illustrates what is going on is to use the Gullstrand-Painlevé coordinates, and in particular in the form known as the river model. There is more on this in my answer to the question If you shoot a light beam behind the event horizon of a black hole, what happens to the light? Given that your profile says you're a programmer not a physicist I won't go into the maths here - please refer to the other question if want the gory details.

You'll be familiar with the idea that if you're floating in a river then you are carried along with the current. If you want to stay level with the same place on the river bank you have to swim against the current. But if the speed of the current is faster than you can swim then you won't be able to keep your place and you'll inevitably be swept downstream.

In the river model spacetime is flowing inwards towards the centre of the black hole, and the speed of the flow, $\beta$, is given by:

Going back to the river analogy, the maximum speed anything can swim is the speed of light, $c$, so if the river is flowing faster than $c$ you can't resist being swept along with it. This is what happens once you're inside the black hole. The speed that spacetime is flowing inwards is now greater than the speed of light so nothing, not even light itself, can resist being swept inwards toward the singularity.

And that's why your neutron star can't remain as an object of finite size inside the event horizon. The matter that makes it up cannot resist falling towards the point $r = 0$ and forming the singularity.

Since there are experienced general relativists peering over my shoulder let me admit right away that I've cheated a bit. The Schwarzschild metric describes a static black hole, so what my argument really shows is that once a black hole has formed no matter falling into it can resist being compressed into the singularity. Your question is about the initial formation of the black hole so applying my argument to it is a bit of a fudge, though I think it still gives an intuitive feel for what is going on. The singularity theorems mentioned by Jerry apply to a forming black hole. However they are vastly more complicated to try and explain to a non-physicist.

We intuitively understand why it is inevitable for a particle to progress forward in time. Relativity tells us, among other things, how objects can affect others, cause other stuff to happen and this is connected with the direction forward in time. We call this structure of "what can cause what" the causal structure.

In the so called Schwarzschild coordinates there seems to be a dramatic singularity on the horizon $r = \frac{2 G M}{c^2}$ but it is actually a special point only in the sense that the continuous "rotation" of the causal structure is such that a particle of the speed of light travels "forward in time" just tangent to the horizon and the rest end up travelling further inside.

This can be nicely seen on Carter-Penrose diagrams which organize the space-time so that direction forward in time is just "up" on the diagram (up to a deviation of 45 degrees). You can see in these that from $r=2M$ we can go just "up" in the black hole. (It is however slightly complicated to understand them, so maybe stick with the previous paragraphs.)

EDIT: I am obviously just talking here about a Schwarzschild, that is, a static black hole. For other black holes there might be some corrections to the statement, see end of this post.

Jerry Schirmer has pointed out that the argument is incomplete and he is right. A fluid in the black hole is somehow imaginable to be still intact forming a "sphere" at an $r<\frac{2GM}{c^2}$ (the term sphere gets a slightly bad meaning in this case) and this argumentation does not directly imply why should it collapse if suddenly it could revert this direction of the causal structure.

Fortunately the argumentation already given can be expanded to very slightly elucidate the theorem Jerry links to.

The theorem can be very roughly understood in the following manner: Once the causal structure in a volume of points (here the horizon) starts to point into roughly one common direction, the causes have to merge somehow after a finite time and cannot continue - they end in a singularity. This is however true only due to the fact that energy-matter is only positive and thus affects space only in a specific way - not all geometrical shapes are possible.

You can get an intuition for this by looking at the picture below. Once we see ultimate causal time-directions (this is a very loose image) pointing towards a center like this, they will have to cross and merge into a singularity. But do they really have to? We are in a curved space-time - the space could "curve out" and continue infinitely in the direction outside our flat screen and the time directions would never cross. However, positive mass and energy always act on space so that this is precisely a shape that cannot be caused by it. 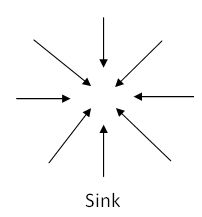 So to conclude, by a "trick" using geometrical analysis it can be shown that physical matter just cannot in principle "construct" a space-time so that a "causal merger", a singularity, isn't contained in the space-time.

Nonetheless, note that structures can in principle exist beyond horizons alongside singularities such as is the case of Kerr (rotating) black holes where once passing through a second horizon you can avoid falling into the ring-like singularity. The properties of this region are however considered very unstable since closed time-like curves ("self-causation") and other weird phenomena are included. Hence any kind of matter might be just the perturbation to destroy the space-time's qualitative properties and cause the matter to form a singularity anyway.

As a non-physicist, this is how I understand it:

Now, it may be that there is a limit to how small you can pack things in... here's how "fuzzball" theory works, again as I understand it.

After you get to quark matter, and keep trying to compress, you run into something odd: once you get down to strings, you run into a problem, because at the energy limit of string theory, mass/energy/space/time are all interconnected and interconvertible. Trying to decrease the size further by adding more matter (and thus increasing gravity) would basically turn the additional mass/energy to space/time, and it would "bounce" back out to a larger event horizon.

In this model, a black hole is basically big ball of strings (and branes, if you like) that is exactly the size of the event horizon. When you hit the event horizon, you hit a high-energy barrier, get turned into your component strings, and absorbed into the fuzzball.

Aside from the escape velocity at the surface reaching c, what actually changed?

The radial direction becomes time-like with the future direction in the direction of decreasing radius.

In other words, the time and radial directions swap character at the horizon.

See, for example, these lecture notes where we find:

The proof that r is timelike inside the event horizon of a Schwarzschild metric is straightforward, but the metric of a black hole while it is forming is not Schwarzschild.

That's not quite right. Assuming spherical symmetry, the geometry outside the collapsing star is necessarily Schwarzschild geometry.

Further, the OP has clearly specified that the event horizon has formed and that the star is inside the horizon, to wit,

Thus, outside the star but within the horizon, the geometry is the interior Schwarzschild geometry where the $r$ is time-like.

This also has nothing to do with the question -- there's no information about why a singularity forms.

As shown above, and in that context, it clearly does have everything to do with the question. Indeed, it follows that a singularity must form.

Light from the surface of the star propagates along null geodesics of the interior Schwarzschild geometry which terminate on a singularity.

Put another way, the world lines of the matter of the star must be within the light cones but light 'out' from the surface must propagate to decreasing $r$.

Thus, the matter of the star must collapse to a singularity.

We do not know that "normal matter can not exist within an event horizon".

For all we know, aliens may be sitting around and drinking coffee watching us.*

We have theories on what could happen. different theories have different views.

Nothing has been tested, scientifically proven as yet.

Some calculations (the status thereof) on some theories (Hawking' et al) indicate that an event horizon may not even exist at all.

it may seem lame, but the closer you get to a black hole, the longer it takes to reach it (that is towards infinity). Math has not yet managed to get over that graph yet, thus suppositions/theories, not yet facts. it still is a true frontier.

*hey, take my comment as a a tong in cheek. lighten up. great subject. :)

Not the answer you're looking for? Browse other questions tagged general-relativity black-holes event-horizon matter singularities or ask your own question.

61
Do all black holes have a singularity?
8
Inside a huge sphere, which is being converted to a black hole
0
Can quark stars form under an event horizon?
1
Formation of Black Hole
1
Black Hole Formation