Why is the second the SI base unit for time?

Specifically, during the moves towards Le Système international d'unités in the 18th and 19th centuries, why didn't anyone attempt to move us away from the definition of there being 24 hours in a day?

Wikipedia informed me that the name second comes from the second division of an hour. It also claims that the concept of having 24 hours in a day dates back at least 6000 years to the earliest Egyptian civilization. It also says the word second (as a measurement of time) didn't make it into English until the 1500's and couldn't be measured with any accuracy for 100 years. So by one way of looking at things, the base unit of time (or perhaps the grand-pappy unit of time) is the hour.

I expected to find a reason in time being one of the basic properties of the universe, being immutable (in 18th century eyes) and therefore used as a pivot point for other unit definitions. But the dependency graph of SI units mostly dispelled me of that: both temperature and mass were found to be as independent as time, and both units were redefined during this period (to Kelvins and kilograms, respectively). 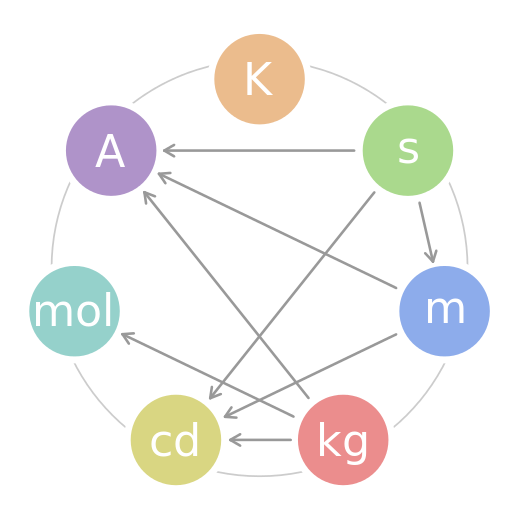 During the same period, other units were attempted to be re-measured from new standards:

And yet, efforts to define the second seem to center on more perfect measures of the existing definition of 1/86,400th of the Earth's rotation. Given the predilection for base 10 (and the gradual move away from units depending on our earthly frame of reference), why was the second left at such a cumbersome, ancient interval? Why didn't we redefine a new measure of time to be (say) 1/100,000th of a day, put 10 hours in a day, etc. etc.?

Did no one think to challenge the convention of 24 hours in a day? Why not?

That came out a little more jumbled than it was in my head, so let me sum up: I'm mainly interested in answers addressing attempts to redefine units of time and why they didn't achieve wide adoption in the scientific community.

It's my understanding that the invention of the metric system during the turbulence following the French Revolution also included a switch to decimal time, with ten hours per day, etc., but that it didn't take. There's a certain amount of cultural inertia that has to be overcome; as you're probably aware, those of us in the United States still have many miles to go before we can fully adopt the metric system.

As you say, you have to give anonymous inventors of the 24-hour day credit: while the metric approach of powers-of-ten relationships between units is dreadfully easy to handle when you're using base 10 arithmetic, it's quite difficult to divide ten things into three equal-size sets. Remember that base ten is essentially an arbitrary choice made because most people have ten fingers and spend their childhood grouping things into fives and tens to count them. Twenty-four has boatloads of divisors: you can separate into a dozen pairs, three groups of eight, or six quartets. Sixty would make a pretty nice base, since it's the first number divisible by two, three, four, and five; but sixty is too many things for most people to count in their heads.

The second is actually historically based not on the length of a year, not of a day: until the adoption of the cesium clock standard in 1960, the definition of the second was actually the appropriate fraction "of the tropical year 1900." It took roughly half a century for the standards committee to realize that we can't go back and re-run the year 1900 to see whether we're still producing correct seconds.

There are several things that the SI system does that don't quite make as much sense as you might like. Why on earth does the base unit for mass, the kilogram, have a prefix? Why is the base unit for electricity the ampere, when we've known for a century that charge occurs naturally in standard-sized lumps? I put the SI endorsement of the historical relationship between the second, the minute, the hour, the day, and the year in the same category. It's a convenient unit with strong historical and popular support. I don't see a need to decimalize the day.

For historical timekeeping systems and the decimal time adventure of the French Revolution I happened across Carrigan, "Decimal Time", 1978, which cites

Old papers have old references! Carrigan observes that while weights and measures are important enough for commerce that many local standards arose more or less at once, early precise timekeeping would be complicated by the vagaries of travel by ship or by land. The engineering skill to build a clock with a useful second hand "preceded to some extent the need for standards of communication at small time intervals[, which] may have led to the universality of the present time system."

A long time ago, the Chinese had a decimal time system, dividing the day into 100 ke (just under a quarter of an hour each). See for example item (2) in the following excerpt from "Heavenly Clockwork: The Great Astronomical Clocks of Medieval China" By Joseph Needham, Ling Wang, Derek John de Solla Price (image source) 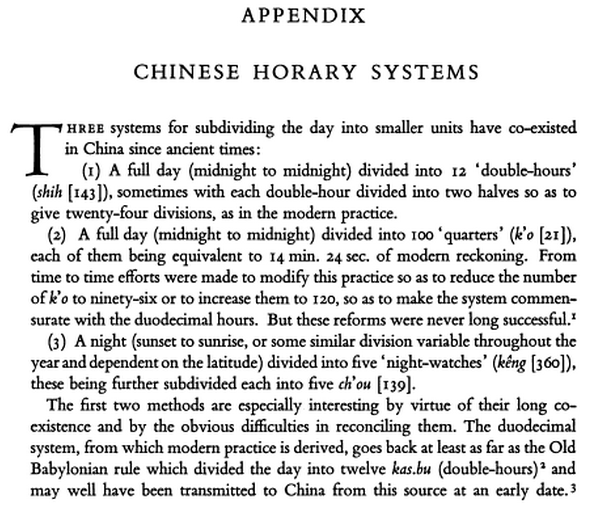 The French revolutionaries tried it too - they kept 12 months, but they were 30 days each and divided into 3 weeks of 10 days; the day was divided into 10 hours of 100 minutes of 100 seconds. They made clocks that showed both times side by side - presumably to help in the transition. Like so much in the Revolution, it didn't last... 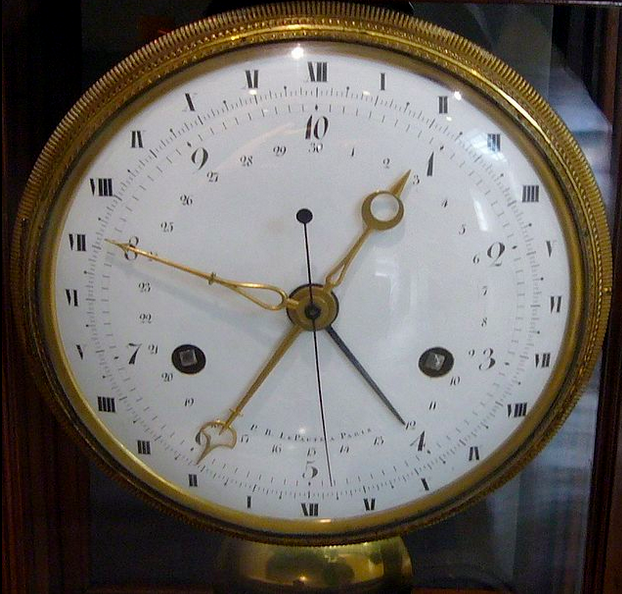 I stared at this image for quite some time and still couldn't quite figure out what time it was. Pretty sure it was the 12th, and 80 minutes past midnight. What puzzles me is that the outer hand seems to indicate that it is about 10 past 2 (24 hour clock). Those two do not agree. Maybe the clock is broken. For sure five hands is too many.

As to "why they didn't achieve widespread adoption"? The French revolutionaries were a pretty toxic bunch - you might think they were your friends, but they another power grab put your friends behind bars and your own career in peril. Given that even Antoine Lavoisier, the chemist, lost his head during La Terreur, it is not surprising that mainstream scientists might be reluctant to associate themselves with the revolutionary movement. And presumably they already had all the measurement equipment calibrated in seconds; it would have taken some time (and instrument makers who kept their heads) for a transition even to begin to take place. Remember that changing the definition of the second would have required a whole family of calibrated, traceable instruments to be created. At the time, this was not a revolutionary priority.

A very complete treatment of the issues of digital time can be found at http://www-history.mcs.st-and.ac.uk/HistTopics/Decimal_time.html

Some of the key points worth reiterating:

Two references quoted in the above article:

One more recent attempt at "decimal time" was made by Swatch who created a "universal time" that had 1000 .beats (really - dot-beats!) in a day - equal to one French decimal minute. "Let's have coffee at @450" never really took off... It is used as the time reference in ICQ and some online games, and the php time functions have a b format specifier to convert conventional time to .beats time.

The French Revolutionary Gov't did try to move towards a decimalized system of time measurement, with a second defined as one-one hundred thousandths of a day (along with decimal hours, minutes and a new calander), around the same time as it introduced the proto-metric system. But unlike the rest of the metric system, the new time keeping system and calender failed to catch on.

I suspect the reason is because while the rest of the metric system met a real need for standardized units in a France that had dozens of differing unit-systems for lengths, weights, volumes, etc., the sexigesmal system of time, along with the twelve month calendar, was already standardized enough by 1795 that the advantages to switching didn't outweigh the costs.

Not the answer you're looking for? Browse other questions tagged time history si-units metrology or ask your own question.

35
Why does the metric system use "kilogram" as a base SI unit?
14
How is a second measured? And why is it measured that way?
21
Why is the candela a base unit of the SI?
1
How measurements for defining a second were made?
26
Why is the meter considered a basic SI unit if its definition depends on the second?
0
Base unit definition and realization under relativistic conditions
4
Why do (kilo)watt-hours double-count units per time?
0
How do we introduce an hour as a time unit?