Why aren't all photons virtual particles even in the “vacuum” of empty space? [duplicate]

I'm thoroughly confused about the nature of electromagnetic radiation. Light is supposed to exhibit both wave and particle characteristics. But does that mean that it is both a wave and a particle or neither a wave nor a particle? If the latter, then it is not a "real" particle at all, but only occasionally behaves as one (hence, a "virtual" particle). And if the former, then it is, depending on the experimental setup being used to detect it, a "real" particle, but one that only exists (as a particle) for a limited time, which again, corresponds to the definition of a virtual particle ("a transient fluctuation that exhibits many of the characteristics of an ordinary particle, but that exists for a limited time" - Wikipedia).

Photons do not exhibit the property of virtual particles, but it is not your reasoning that is faulty, you have simply fallen prey to an imprecise use of terminology.

Let me start with my view of the wave/particle duality. Most of the images of "particles" and "waves" comes from a time when we really didn't understand the quantum world, and some characteristics of light (and matter, see double-slit with electrons) seemed to be as if it was a classical wave, and some of it was as if it was a point-like object in space with definite position/momentum (a particle in some dictions). But neither description captures the essence of what the quantum object photon/electron/quark/whatever really behaves like: A state in a Fock space, where the creation/annihilation operators are the modes of a quantized field (e.g. the vector potential of electrodynamics, which yields the creators/annihilators of photons). And that's it. "Wave" and "particle" are concepts that capture some of the properties of the quantum object (capabitility of interference and possession of momentum/position, respectively), but they are not what it really is.

Now, for these quantum objects (I will call them particles from now on, simply because that is the usual term, but bear in mind that these things are not little blobs in space), one can draw Feynman diagrams that tell you something about the probability that a given collection of initial particles will evolve into a given collection of final particles. When drawing these, every line corresponds to a particle "propagating" through spacetime. It can now happen that there are internal lines, i.e lines which are not beginning or ending at any initial or final state. The particles one would associate to these internal lines are called virtual, because, as it turns out in the explicit computation, they do not have to obey the on-shell physical laws real particles do - they can have energies that do not match their momenta and masses, i.e they violate the mass-energy relations special relativity forces upon every real particle. But since they do not connect to initial/final states, they cannot ever be observed - thus the term virtual.

Every particle that makes click in a detector is real, since it is a quantum state that actually interacted with something (and you will never measure a photon that does not obey the famous $E = h\nu$ and $p = \frac{h}{\lambda}$). Virtual particles can be imagined as popping in and out of existence during the transition betwenn initial and final states, thus existing for limited time, but that is not their defining property - their violation of the on-shell laws is.

EDIT: As has been pointed out, I have not been completely rigorous in my explanation here. See Frederic Brünner's answer for a good discussion of caveats and inaccuracies (and also pretty pictures).

Short answer: A virtual particle is not the opposite of a classical particle.

While the other answer captures some aspects correctly, there are still a few flaws and inaccuracies which in the following, I will try to set straight.

Strictly speaking, quantum objects are neither waves or particles. They are entities behaving like either the one or the other, depending on the situation. I will nevertheless refer to them as particles, as in the context of quantum field theory the quantum nature is implied.

The statement that particles are states in a Fock space is not true in general. This only holds when we are dealing with free, i.e. non-interacting particles. Quantum field theory would not be as involved as it is if all we had to deal with were free particles. The precise formulation of a state space for interacting theories is not known. There exists, however, a formalism that allows to classify physical states; the keyword is BRST symmetry. For more detail on this, see the answers to this question.

Since the state space of particles is problematic, using it as a description of what a quantum object really is in the context of wave-particle duality is questionable.

Virtual photons, or virtual particles in general, are relevant in the context of Feynman diagrams. The latter are a convenient way of graphically organizing perturbation series in quantum field theory, allowing us to calculate various kinds of observable quantities. Unlike stated in the other answer, virtual particles not only correspond to loops, but all internal lines in such diagrams. Furthermore, lines in Feynman diagrams are not worldlines in spacetime-diagrams, and the lines do not correspond to propagating particles in reality. The only objects of physical relevance are the in- and out-states, which correspond to real, measurable quantities (one has to be cautious in the case when one is talking about so-called resonances, but this is a different story). See for example the following diagram: 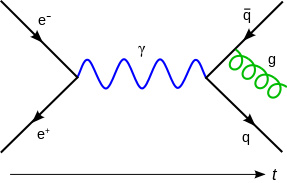 This should not be understood as a photon (denoted by $\gamma$) propagating through spacetime as an intermediate state, but just as a mathematical contribution to a perturbation series, where that internal line contributes a specific analytic quantity. Feynman diagrams are just mathematical tools, and so are virtual particles. See my answer to this question for more detail.

The connection: there is none

This is how an experimentalist sees this part of the question ( the wave/particle duality has been addressed).

So, if photons invariably appear to exhibit the characteristics of virtual particles,

As described in Frederic's answer, all internal lines in Feynman diagrams are called by a virtual particle's name. In the plot in his answer it is called a gamma because it carries the spin of a gamma BUT not the mass of the gamma. In general the exchange lines represent not only a propagator function within integrals, where the mass is the mass of the real particle by that name , but also the conserved quantum numbers of that particle so that the input and output quantum numbers are conserved. A virtual electron line has the electron mass in the propagator function and also all the quantum numbers of the electron, the spin, the lepton number. It is a mathematical construct that allows us to calculate probabilities of interaction , lifetimes and spin states for given input and output particles ( lines in Feynman diagrams). A photon can be an external line, or an internal line, i.e. either a real on mass ( 0) particle, or a virtual off mass shell one between input and output real particles.

why are they not actually virtual particles (even in a vacuum)?

Everything we observe, we observe because of an interaction. An interaction means input particles and output particles. Let us take a photon from a star. We tend to think it on mass shell, i.e. real. It hits our eye and generates a chemical reaction that tells us a star is there, or the film of a camera to the same effect. If one wants to be really pedantic, one could say that the photon that cam from the star was emitted by an interaction , an atom deexcites and emits the photon we see, so why is it not virtual?

Because we are not in a position to define the input atom line at the star and calculate the probability of a virtual photon to hit an atom in our eye. It is our decision what we call virtual and what we call real by how we set up the problem to calculate observables. For example in the Feynman graph above the quarks and gluon are considered real in the calculations, yet nobody has seen a quark or a gluon. We have seen jets identified as quark jets and gluon jets, have measured their momentum and energy and can check whether the calculation of the graph makes sense.

From all these answers you should carry the result that "virtual" is in the mind of the physicist who sets up the problem, either to calculate ( theorist) or to measure (experimentalist). It is a mathematical tool.

Not the answer you're looking for? Browse other questions tagged quantum-field-theory electromagnetic-radiation photons quantum-electrodynamics virtual-particles or ask your own question.